Venezuela’s opposition leader Juan Guaido said Monday that his team had delivered its first round of humanitarian aid amid objections from President Nicolas Maduro, Reuters reports.

“Today we delivered the first donation, or the first cargo of humanitarian aid, albeit on a small scale, because you know they have blocked the border for the time being,” Guaido, 35, said in televised remarks in Caracas on Monday evening.

Guaido shared photos of the supplies on Twitter, announcing that nutritional supplements delivered would provide 1.7 million rations for thousands of children and pregnant women. He did not say from where or whom they came from.

Supplies sent to Venezuela had so far been stockpiled and blocked by the military from entering the crisis-stricken country. Guaido said the aid was being held at collection points in Brazil, the Colombian border town of Cucuta, and a Caribbean island.

While a large number of Western nations, including the U.S. and much of the European Union, have backed Guaido as the country’s de facto interim president, there are few signs that the military-backed Maduro will loosen his grip on power.

Under Maduro’s rule, rates of malnutrition and preventable diseases have soared in the oil-rich country, which once was one of the wealthiest in Latin America. 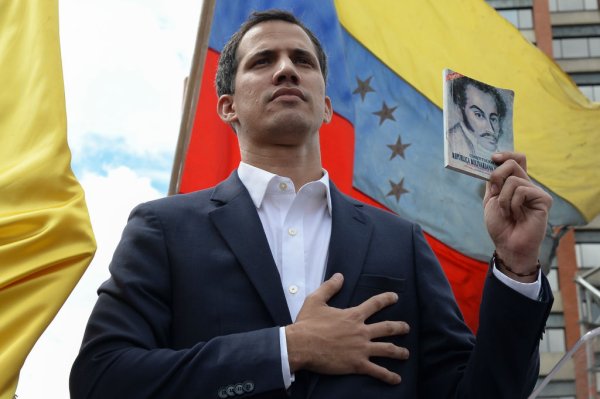 U.S. Aid to Venezuela to Test Military Loyalties
Next Up: Editor's Pick