Long before Valentine’s Day was celebrated, a festival that had nothing to do with love took place around the same time of the year. It was called Lupercalia, and it occurred on February 15 each year in ancient Rome. Instead of flowers and chocolates, the festival was marked by more ominous rituals.

Centuries later, that coincidence of the calendar has led to frequent speculation that the Lupercalia festival is one of the earliest ancestors of Valentine’s Day. The ancient festival’s association with fertility rituals has only added to that idea. But in fact, the relationship between Lupercalia and Valentine’s Day remains unclear — and some historians argue that there is no relationship at all.

What is known about Lupercalia is that it started with an act of sacrifice. Priests of the god Lupercus, called the Luperci, would take off their clothes and slaughter goats in the Lupercal, the cave that Roman legend held to have been the location where city founders Romulus and Remus were nursed by a wolf. The Luperci would then cut the goat’s skin into strips and run around the Palantine Hill in Rome, striking women with the goat’s skin.

“The festival was to enable or facilitate fertility,” says Kresimir Vukovic, a postdoctoral fellow at the Catholic University of Croatia who has studied Lupercalia. “If you were struck by a Lupercus, one of the priests, it was considered that you would give birth to more children,” he explains. “I don’t think it was a sadistic beating, it was a symbolic beating.”

Vukovic says that mosaics and reliefs from the period depicted instances of women, sometimes stripped naked, accepting the blows — which he says is unsurprising, “given the sexual aspect of the festival.”

The most plausible theory for the whipping was that it served as an initiation, he says, as ritualized “sexual play” that marked a boy’s transition into adulthood. Nevertheless, the historian emphasizes that modern scholars have different theories about the practice and that there’s even evidence that the Romans themselves were puzzled by the naked priests’ behavior.

One presumed aspect of the festival is the idea that there would have been a matchmaking lottery associated with Lupercalia, a supposition that is often cited as further evidence of the connection between the ancient festival and Valentine’s Day. But Vukovic says there is no record of men being paired randomly with women for participation in the ritual, and that the math on that idea wouldn’t make sense anyway. “The number of women must have been much greater than that of the men,” he says, noting that there most likely would only have been around two dozen Luperci at the celebration.

In his book America’s Favorite Holidays: Candid Histories, Bruce David Forbes echoes the same opinion regarding matchmaking during Lupercalia. “Although there probably was wild partying, there is no reliable evidence that it involved a ritualized time when men drew the names of women, or that it involved the pairing of lovers,” he writes.

Without this ritual at the Roman festival, there appears to be little correlation between the Lupercalia and Valentine’s Day. Nor is there conclusive evidence that the date of Lupercalia influenced Pope Gelasius I when, in the 5th century, he made February 14 into a day that would honor the Christian martyr Saint Valentine. Though pagan holidays were sometimes co-opted by the Church, this doesn’t appear to have been one of those times.

“There is a calendar overlap, but there’s no indication that one was replaced by another,” Vukovic says.

The earliest historical record of the Lupercalia was from the 3rd century BCE, while the last record was from the end of the 5th century CE — around the same time Pope Gelasius I created a day for Saint Valentine. But even though they weren’t far apart chronologically, the supposed symbolic overlap between the two took centuries more to develop, as Valentine’s Day hadn’t yet acquired the romantic meaning it has today. “The earliest record of Valentine’s Day as a celebration of love and fertility so far as I know is from the 14th century (CE),” Vukovic says. “There is a big gap between the two.”

Forbes’ book presents a similar observation, noting that “throughout the next eight or nine hundred years, there is no substantial evidence of romantic couples in Europe doing anything special annually on or around February 14.” While the author makes references to a letter in which Pope Gelasius I criticized the Lupercalia, he writes that there is no indication of Gelasius making a concerted effort to replace it.

Instead of Valentine’s Day having its roots in Lupercalia, it appears that the two events have little in common besides sharing a calendar date in mid-February. Long gone are the days of goat sacrifices — and those mid-February days are no longer anything special when it comes to fertility. 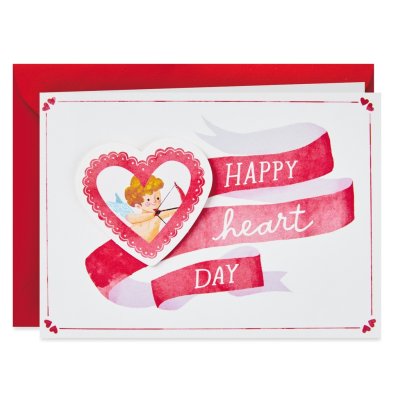 Cherubic Cupid Is Everywhere on Valentine’s Day. Here’s Why That Famous Embodiment of Desire Is a Child
Next Up: Editor's Pick