The opening performance of the 61st Annual Grammy Awards featured a busy stage production with a robust set and dozens of dancers. So it was easy to miss the political message hidden among the colorful costumes and choreography.

During Camila Cabello, J Balvin and Ricky Martin’s performance of “Havana,” an extra sat on a bench reading a prop newspaper with the headline, “Build bridges not walls.”

The group of performers was an international one: Cabello was born in Cuba and immigrated to the U.S. as a child, Martin is Puerto Rican and reggae singer Balvin hails from Colombia. Cuban trumpet player Arturo Sandoval was also featured in the number.

The blink-and-you’ll-miss-it shot of the newspaper appeared to be a direct commentary on President Donald Trump’s ongoing demands for a wall along the U.S. border with Mexico. As the President continues negotiations with Congress, the U.S. may yet enter a second government shutdown over the impasse.

Ricky Martin, the king of Latin pop behind “Livin’ La Vida Loca” and a two-time Grammy winner, has used his platform to voice political opinions in the past. The artist, who is openly gay, has advocated for gay marriage and LGBTQ rights and hosted a fundraiser for President Obama in 2012. 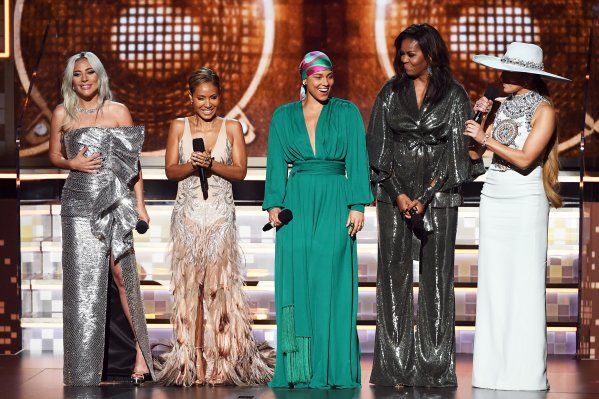 Michelle Obama Brought the Crowd to Their Feet at the 2019 Grammys
Next Up: Editor's Pick