A giant, godlike President Trump float made its debut on the first day of one of Italy’s most famous carnival events this weekend.

The Carnevale Di Viargeggio festival in Viareggio, Italy, is attended by about 600,000 people and is famed for its papier-mâché sculptures. The largest of which can be as heavy as 40 tons and often carry a political message. However, to American audience members, one gigantic float stood out: a huge, moving sculpture of President Donald Trump, decked out with wings and golden armor.

The parade’s official website said that the float is called “Master-Drone.” In its right hand, the Trump statue carries a sword with a ring of blue Twitter birdies on its hilt. The phrase dazi vostri – which translates to “your taxes” – is inscribed on the blade. Many Italians wrote on Twitter that the expression is actually a play on words with the expression cazzi vostri, which means “none of your f—king business.”

The official description of the statue says that the float was created by artist Fabrizio Galli, whose past sculptures included satirical depictions of Kim Jong-un and Vladimir Putin. It says Master-Drone was a take off of a character from the miniature war game Warhammer 40,000. In the era of Trump, the statement said, fantasy had become reality.

“The dominant male par-excellence has arrived, democratically, and is now here, among us. The Master-Drone flies over the Viareggio boardwalk as we prepare to pay the price,” the parade’s description said.

Many conservative commentators on Twitter appeared to interpret the float as a tribute to Trump. Several tweeted that it was a “parade for Trump.”

Emerald Robinson, the White House Correspondent for right-wing channel One America News, wrote, “This carnival in Italy looks like a lot more fun than the Thanksgiving Day Parade in New York. Just look at this Trump float!”

Trump’s image has been a popular image in the parade several times over the past few years. In 2017, a snarling Trump-head was placed in the middle of an American-themed float. A Statue of Liberty stood on top of Trump’s hair, where a giant cowboy and the phrase “Bang Bang” towered over him. A clip of the Green Day song “American Idiot” played in the background.

Other floats in the parade this year also have serious social messages. These floats include “High Tide,” depicting a gigantic whale trapped in a pile of trash, and “The Pack,” a commentary on bullying and violence showing a group of hyenas tearing through a book.

People in Italy will have several more chances to view the parade. The Carnevale de Viareggio will take place about once a week until Fat Tuesday on March 5. 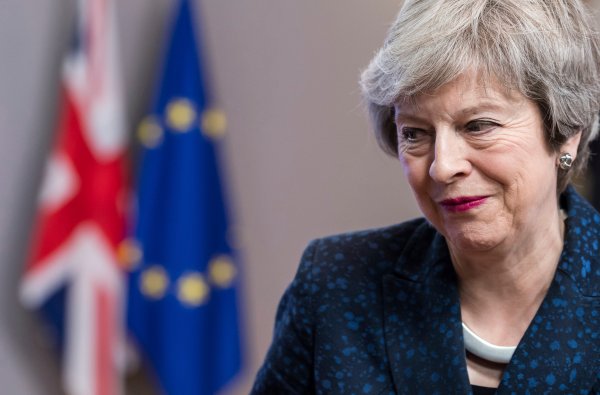 Theresa May Promises U.K. Lawmakers Brexit Vote by Feb. 27
Next Up: Editor's Pick