The End of a U.S.-Russia Arms Treaty Spells Long-Term Trouble

US President Donald Trump and Russia's President Vladimir Putin pose ahead a meeting in Helsinki, on July 16, 2018.
Alexey Nikolsky—AFP/Getty Images
Ideas
By Ian Bremmer
Bremmer is a foreign affairs columnist and editor-at-large at TIME. He is the president of Eurasia Group, a political-risk consultancy, and GZERO Media, a company dedicated to providing intelligent and engaging coverage of international affairs. He teaches applied geopolitics at Columbia University’s School of International and Public Affairs and his most recent book is The Power of Crisis

Some foreign-policy decisions fundamentally reshape the world as we know it in an instant. Others take years for their full impact to be felt.

The Trump Administration’s decision on Feb. 1 to withdraw the U.S. from the Cold War–era Intermediate-Range Nuclear Forces (INF) Treaty is in the second category. The threat of nuclear war has not suddenly spiked because the U.S. decided to quit the INF treaty, nor because the Kremlin announced its intention to follow suit 24 hours later. But make no mistake: this is a decision from Washington that makes the world a more competitive, combustible place in the long term.

There’s little question that Moscow indeed violated the terms of the agreement signed in 1987 by Ronald Reagan and Mikhail Gorbachev. As tensions were rising over Ukraine back in 2014, Russia deployed a type of missile that the INF treaty was supposed to ban; then President Barack Obama even wrote a letter to Russian President Vladimir Putin to that effect, though it was in the spirit of trying to keep the treaty intact rather than break it completely. The plea fell on deaf ears. Five years later, the Trump Administration scrapped the deal altogether. From a certain angle, the decision looks eminently reasonable: What good is a treaty if one of the signatories refuses to adhere to it?

But in geopolitics, as in life, context matters. The Europeans have long known that the Russians weren’t living up to the terms of the INF treaty. In an era of stronger U.S.-E.U. relations, there might have been coordination between Washington and Brussels on how to get the Russians to respect the terms of the deal rather than the U.S. deciding to do away with it altogether. As it stands, Washington’s decision to walk away from the INF treaty despite strident European objections is yet another sign to European leaders that the U.S. can no longer be counted on as a dependable partner.

Then there’s China. Right now, relations between Beijing and Moscow remain relatively strong while Beijing and Washington duke it out over trade. The Chinese supported the INF treaty, if for no other reason than it meant they could build up a credible military arsenal in relative peace while both the U.S. and Russia watched from the sidelines.

Now China needs to worry about a possible missile buildup on the 2,615-mile border it shares with Russia, in addition to any possible deployment of U.S. missiles in Asia that the INF treaty prohibited. And while it’s unlikely that the INF withdrawal will have much bearing on the U.S.-China trade-war negotiations currently unfolding, it adds fuel to the narrative that the U.S. and China are on a slow march toward collision.

But the most serious risk in the wake of the INF pullout is the continued deterioration of the U.S.-Russia relationship. Despite the apparent chumminess between President Donald Trump and Putin, issues like Ukraine, Syria, election interference, cyberoperations and NATO expansion all continue to push the two sides toward conflict. Already, Russia’s defense ministry has said it will develop new land-based missile systems, which were forbidden under the pact.

The INF treaty, and arms control more generally, was one potential area of collaboration for Washington and Moscow to work together and make the world a safer place. Now it’s yet one more point of tension. And as more developments from Robert Mueller’s investigation make their way into the headlines, the last thing the world needs is more points of friction between Washington and Moscow. 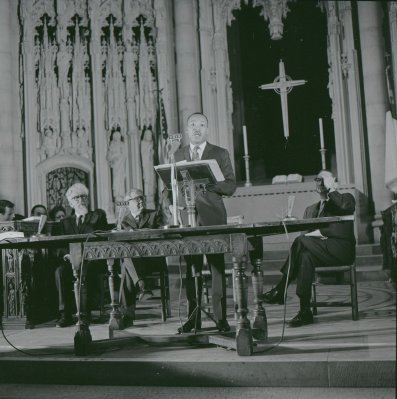 The MLK Speech We Need Today Is Not the One We Remember Most
Next Up: Editor's Pick