Trump Shocks. His Opponents Bore. How the 2020 Election Will Expose Whether Americans Can Still Pay Attention to What Matters

As the presidential rollouts begin, the contenders will tell us what to expect of them—as they calculate what to expect of us. What will it take to capture our imagination and, even more urgent, our attention? Donald Trump has shaped that test for all who hope to succeed him, and we’re about to find out what that means.

Here comes as diverse and intriguing a crop of contenders as we’ve seen in years. But when a perfectly worthy candidate like former mayor Julián Castro talks about how “I have a strong vision for the country’s future” or Senator Kirsten Gillibrand tells Stephen Colbert that “I would bring people together to start getting things done” or Senator Elizabeth Warren stands in front of her microwave only to invoke those who “work hard and play by the rules,” my attention wanders. We’ve now lived with prolonged exposure to constant shock, to the adrenaline jolt of hearing something we never thought we’d hear from a public figure, whether about trade or tariffs or women or walls. It makes me wonder whether Trump has so accustomed us to surprise that any script, however sincere, sounds phony and forced.

Before they can start talking about vital needs or fresh ideas, candidates have to persuade us to listen. That task has perhaps never been harder, and not because we don’t care. We may just no longer know how.

Elections have consequences; so do campaigns, and Trump’s never actually stopped. Unlike his predecessors, he saw no need to shift from running to serving, never moved past the performance art of his massive rallies where he could repeat the same outlandish promises over and over, thrilling the crowds, appalling the fact checkers, confounding his adversaries. The universe of political discourse swelled, crashing through boundaries of truth, tradition and at times decency. The audience grew too, as people never much interested in politics were drawn to the dazzle. Meanwhile, traditional gatekeepers have found themselves at a loss for how to react, other than to overreact, overread messages, overplay hands. Shared stupefaction binds us like an audience at a horror movie, our lizard brains alight.

Trump is not responsible for our attention economy. He just got in early and looked to corner the market. All this had been a long time coming, the technologies hooking us on cheap and constant stimulus, our reflective reflexes weakening to the point that the last remaining political sin is now uncertainty.

Our political conversations have become not just dismal and mean but also way too focused on the combat instead of the context—like which problems most need solving, who has the best solutions and whether there is enough common sense left anywhere to find common ground.

The Democrats in the midterms showed great discipline, and saw great success, by focusing on health care and economic fairness and all but ignoring the President; but that is harder when someone takes him on one-on-one. Senator Kamala Harris also drew huge-at-this-stage crowds and donations while gesturing in this direction: the President’s only working pronoun is the first person singular; she made hers plural, with her admonition that We Are Better Than This.

Before 2020 arrives, we’ll quickly get a sense of who can succeed on the field Trump has created—or who can even build a new one. While agile social-media technique may not be the same as governing, it is now a necessary part of leadership. Hence the glow emanating from the coverage of a rookie member of Congress like Alexandria Ocasio-Cortez, whose dominant use of social media has taught a world of wonks how to inject a debate over marginal tax rates into the political bloodstream. Even her name has proved too cumbersome for this restless age, now compressed to AOC—a JFK for the Twitterati.

Time is not money; attention is. It will be telling to see how people use every new tool and tactic that technology, and even Trump, has delivered unto us—not to divert and divide, but to shape a more honest, more subtle, more substantial campaign than the last one. We know how easily we can be distracted; I’m counting on the candidates who show us how we can be healed. 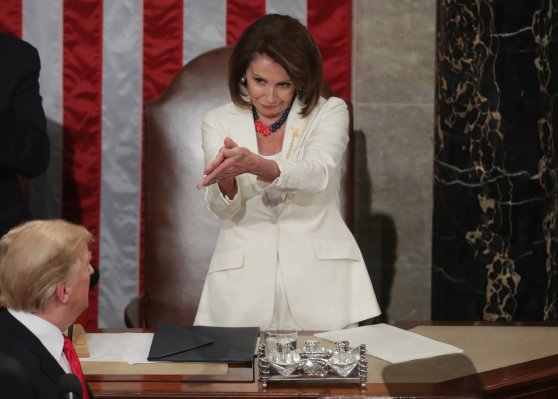 Here's What Nancy Pelosi Was Thinking During Widespread Clapback
Next Up: Editor's Pick