Donald Trump is Facing a Dilemma That Could Define His Presidency

The State of the Union speech is one of the most extravagant portraits of American power. Replete with pageantry, tens of millions of television viewers, a chamber crammed with dignitaries and Donald Trump at the center of the shot–is it any wonder the annual address is one of the few Washington rituals the President relishes?

But there was a new face in the frame when Trump stepped onto the rostrum on Feb. 5. Just over his left shoulder sat House Speaker Nancy Pelosi, who has outmaneuvered Trump since she retook the gavel in January. On the House floor in front of him sat dozens of female legislators dressed in white, a suffragist homage and a stark reminder of both the drubbing he took in the November midterms and the investigations those Democrats will pursue over the next two years.

That power shift, visible to all, is particularly dangerous for Trump. His political brand is built on dominance and rooted in the strength he projects to his supporters. The new reality in Washington challenges both. The President’s legislative agenda appears dead in the water, and his approval ratings have dropped. Polls show voters blame Trump for the 35-day government shutdown he triggered, oppose his border-wall demands and place more faith in Democrats when it comes to the President’s signature issue of border security.

Which may help explain the signs that Trump’s grip on the GOP is starting to slacken. Trump alienated supporters by reopening the government without securing funding for the wall. And in recent months, Senate Republicans have increasingly defied him. “There is certainly an increased willingness to challenge some of the President’s more dissonant foreign-policy positions,” says former Arizona Senator Jeff Flake, who has frequently criticized Trump.

Just how much power Trump retains will be tested in the coming days. If lawmakers don’t meet his Feb. 15 deadline to deliver more than $5 billion in border-wall funding, Trump has vowed to shut down the government again or use the Executive Branch’s emergency powers to build the barrier on his own authority. Senate Republican leader Mitch McConnell has warned that either step would escalate Trump’s tensions with Senate Republicans.

That leaves Trump in a dilemma. He knows how important it is to his supporters that he fight to deliver his signature campaign promise to build the wall. But getting in a scrap with GOP Senators carries its own risks: they are his bulwark against Pelosi and the House, not least because the Democrats could take the extraordinary step of beginning impeachment proceedings this year. “It’s the defining moment of his presidency,” says Steve Bannon, Trump’s former chief White House strategist.

Bannon thinks Trump should start construction on the wall without Congress and ignore concerns in the Senate about Trump’s plans to withdraw troops from Syria and Afghanistan. Trump’s more moderate aides, including his son-in-law, Jared Kushner, counsel compromise, according to one White House adviser.

That, however, would require something Trump has shown little ability to do: adapt his style to the demands of the job. Which is why the next few weeks are a key test not just for Trump’s presidency but also for the President himself.

There were signs at the State of the Union that Trump is trying to reset. The tone of much of the speech was conciliatory, with soaring appeals for unity, calls for bipartisan actions like infrastructure reform and lowering prescription drug prices, and a nod to the bipartisan criminal-justice law he signed in December. “We can make our communities safer, our families stronger, our culture richer, our faith deeper, and our middle class bigger and more prosperous than ever before,” Trump told the packed chamber. “But we must reject the politics of revenge, resistance and retribution–and embrace the boundless potential of cooperation, compromise and the common good.”

Other Presidents have pivoted to the center after midterm-election losses. When President Bill Clinton’s party lost the House during his second year in office, Clinton “revised his approach to governing,” says Russell Riley, co-chair of the presidential oral-history program at the University of Virginia’s Miller Center. Clinton worked with then House Speaker Newt Gingrich on sweeping welfare reform and a balanced budget–issues Clinton then successfully ran on in his 1996 re-election campaign.

Trump is more comfortable using his bully pulpit to incite supporters than to persuade skeptics. This may be his last chance to adjust. An NPR/PBS NewsHour/Marist survey conducted in mid-January found that Trump’s net approval rating had dropped 7 points since December, to 39%. Support among key portions of Trump’s base eroded, including a net decline of 18 percentage points among suburban men and a net decline of 13 points among white evangelicals. A Quinnipiac University national poll released Jan. 29 found that U.S. voters trust Democrats in Congress more than Trump by 50% to 41% on the issue of border security.

Trump has insisted on pressing for the wall funding, at the expense of other policy priorities. “He wants to address what we face immediately, which is the humanitarian crisis and the national-security crisis along the southern border,” says White House principal deputy press secretary Hogan Gidley. “Once we do that, there are broader discussions to have” about immigration reform, infrastructure and drug pricing.

But Trump’s threat to act on his own has alarmed Republicans. At a GOP Senate lunch on Jan. 29, some members of the President’s party told one another that they could not stand by and let Trump end-run Congress to build his border wall, according to several participants. If they allowed President Trump to invoke a national emergency on the border in 2019, some have said, how could they stop a Democratic President like, say, Senator Elizabeth Warren from declaring one in the financial sector in 2021, using the same power play to impose costly safeguards on banks?

With GOP defections all but guaranteed, the No. 2 Republican in the Senate, John Thune, urged lawmakers to call Trump aides and warn them there were likely the 51 votes needed to oppose an emergency declaration. McConnell has been sending a similar message to Trump himself. In his conversations with the President, McConnell raised polling data showing cratering support for Trump’s handling of border security, officials familiar with the conversations tell TIME.

Trump’s problems with his own party have been spreading to other issues since the November 2018 midterms. In December, seven GOP Senators joined with Democrats in calling for the U.S. to withdraw military assistance to Saudi Arabia’s war in Yemen. The same day, the chamber unanimously passed a resolution rebuking Crown Prince Mohammed bin Salman of Saudi Arabia for the murder of journalist Jamal Khashoggi, even as Trump defended his Gulf ally.

On Jan. 29, McConnell proposed an amendment expressing disapproval of Trump’s planned troop withdrawals in Syria and Afghanistan. It passed on Feb. 4 with the support of all but four Republicans; three Republicans did not vote. The defections prompted Trump to complain in private about the lack of lockstep loyalty, according a person familiar with Trump’s reaction.

Some Republicans on Capitol Hill insist there’s no real rift with the White House. “The tent is big enough for some disagreement,” says GOP Senator Tim Scott of South Carolina. “Clearly there are some Senators who disagree with the President,” says Louisiana Senator John Kennedy. “But do I think the Senate passing a resolution [opposing Trump’s troop withdrawals] is going to have any impact on what he does? No.”

On the issue of the moment, the Feb. 15 spending deadline, one way out would be for Trump to accept a deal that boosts border-security spending without funding a wall. “If he can get a bill enacted that truly does strengthen the border, then he will be able to sell that to his base without having an actual 2,000-mile-long physical wall,” says Whit Ayres, a GOP consultant at North Star Opinion Research. “The key is making the border more secure.”

Trump has survived tough times before. As a businessman, he bounced back from serial bankruptcies and crushing debt. As a presidential candidate, he was written off by the Republican establishment in the weeks before Election Day, then went on to shock the nation with a dramatic victory. He did it with the same formula that he has relied on as President: the instinct to improvise, fight back, belittle his opponents and bend the truth to suit his needs.

But the stakes are higher now. Trump faces determined congressional investigators, multiple criminal probes and special counsel Robert Mueller’s investigation. At the end of February he will hold a second high-stakes summit with North Korean leader Kim Jong Un. His trade negotiations with China aren’t going well, and his talks with the Taliban over leaving Afghanistan risk ending America’s 17-year war there with a hard-to-hide defeat.

Failure on any one of those fronts will make the others that much harder, and friends say Trump is feeling the pressure. “I think he realizes how important it is to get a win out of this, how important it is not to lose,” says conservative TV host Eric Bolling, who regularly talks to Trump. That’s doubly true for a man whose political worldview contains only winners and losers, with no room for compromise.

Trump’s moderate advisers may hope that at this most precarious moment he will show himself capable of growing, of learning and adapting to the realities of the job. Other Presidents have been defined by their ability to do just that. And during his State of the Union speech, Trump seemed to be vacillating between comity and provocation, struggling to find his way to a different kind of presidency, one more suited to the new division of power in the capital.

The hard truth in Washington now, though, is even that unlikely transformation may not be enough to salvage his presidency. Soon enough the same august chamber will provide the setting for grueling congressional investigations, and possibly even impeachment.

With reporting by Alana Abramson, Tessa Berenson and Philip Elliot/Washington 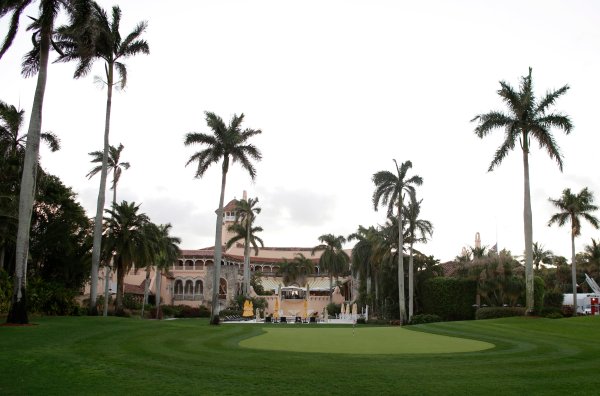