The 'Green New Deal' Is Popular. Now Backers Need to Decide What It Is, Exactly

Americans remember the New Deal as a set of programs designed to end the Great Depression. But in the months before he became president, Franklin Roosevelt used the phrase more to describe how he would approach the problem: by engaging in “bold persistent experimentation.”

“It is common sense to take a method and try it,” he said. “If it fails, admit it frankly and try another. But above all, try something.”

Decades later, a number of progressive Democrats have embraced a so-called “Green New Deal” to fight climate change and address a number of other issues at the same time. But like FDR, they haven’t yet agreed on a definition of exactly what programs it might include.

As the 2020 Democratic primary heats up, environmentalists and lawmakers are starting to debate what an actual legislative program might look like, hoping they can set the standard for a crowded field of candidates.

“We’re going to be pushing folks not just to pay lip service to the Green New Deal or use it as a sexy buzzword,” says Varshini Prakash, a co-founder of the Sunrise Movement, an activist group that created buzz around a Green New Deal during the 2018 election season, “but to get into the details of what it actually means.”

As a slogan, the Green New Deal is already doing well. A December poll from the Yale Program on Climate Change Communication found 81% of voters supported the broad principles behind it.

This week, Democratic Rep. Alexandria Ocasio-Cortez and Sen. Ed Markey are slated to lay out what they see as the central parts of a Green New Deal program in resolutions submitted to their respective houses of Congress. Ocasio-Cortez has become a household name after defeating a powerful incumbent, and Markey, a former member of the House who now serves in the Senate, co-wrote the last big piece of climate legislation to pass the House a decade ago.

The pair’s resolution will include a wide variety of tenets designed to attract support from a guaranteed living wage to a “just transition” for workers affected by the transition away from fossil fuels, Sunrise Movement leaders said on a call for activists Tuesday.

Most significantly, the resolution will call for the U.S. to achieve net zero greenhouse gas emissions by 2030. By setting such a bold target, activists hope to align with the science of climate change: the Intergovernmental Panel on Climate Change, the United Nations’ climate science body, said last year that the planet needs to halve carbon dioxide emissions by 2030 in other to keep temperatures from rising more than 1.5 degrees Celsius, a line that the agency says will lead to some of the worst effects of climate change.

But, despite the science, the goal remains a contentious sticking point even among those who agree on the gravity of climate change. Net zero means that the U.S. would need to eliminate almost all of its fossil fuel use and suck as much carbon dioxide out of the atmosphere as it emits.

The proposal — still light on details — is intended to serve as a “high water mark,” says Prakash. Activists hope that presidential candidates and other Democratic leaders will come up with their own detailed proposals that align with the big-picture principles. Most top-tier Democratic presidential candidates have thus far expressed support for the general idea of a Green New Deal while offering few details about what that means. Sen. Elizabeth Warren said she backs the “idea,” for example, while former Rep. Beto O’Rourke said he’s “supportive of the concept.”

Vague commitments will not be enough to satisfy climate activists. Protesters confronted O’Rourke in New York City Tuesday, demanding “full support.” The Sunrise Movement will protest any member of Congress who opposes the resolution, activists said. “We are working actively in 2019 and 2020 to create a litmus test for any Democrat, really any politician in this country who wants to be taken seriously,” says Prakash.

For all the criticism that the Green New Deal lacks specifics, it would be wrong to say that all progressives have shied away from discussing details. A report from the progressive group Data for Progress laid out suggestions that include not only big picture goals like a plan to “transform to a low-carbon economy” but also a slew of planks that get into the weeds of federal policy with proposals like a “sustainable agroforestry tax credits” and a program to “phase out of incandescent and compact fluorescent lighting.”

And, while many of the specifics may prove difficult to get through Congress, activists say they can look elsewhere, to cities, states and federal agencies to help fill in the blanks. “I increasingly see this not as a Green New Deal but as Green New Deals with an ‘s,'” says Sean McElwee, co-founder of Data for Progress.

Politically, activists need to thread a careful needle when offering details about the Green New Deal. On the one hand, specifics lend credibility to the program and show that it’s more than just a slogan. On the other, actual proposals can become targets for critics, giving potentially supportive Democrats less room to maneuver in the general election.

A Green New Deal that includes broad goals but gives the next president some options could conceivably pass Congress while certain prescriptive policies would not, says a former senior Obama Administration official.

“There is a version of a Green New Deal that is focused on targets,” says the official. “That would be politically viable.” 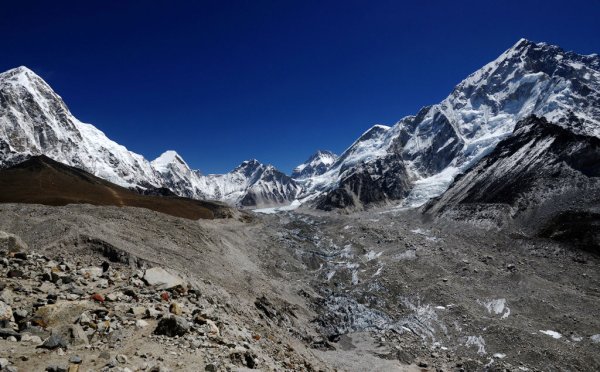 A Third of Himalayan Glaciers Could Melt by 2100: Report
Next Up: Editor's Pick