Why Vietnam? 4 Reasons the Southeast Asian Nation Is Perfect for the Second Trump-Kim Summit

The second summit between U.S. President Donald Trump and North Korean leader Kim Jong Un is set to take place in Vietnam at the end of February, Trump told Congress Tuesday, confirming what many had seen as the most likely venue for the talks.

Trump’s announcement came during his State of the Union address, in which he also opined the U.S. would by now be “in a major war” with North Korea had he not been elected President. Thanks to his diplomacy, Trump said, “hostages have come home, nuclear testing has stopped, and there has not been a missile launch in more than 15 months.”

Singapore’s Sentosa Island played host to Kim and Trump for their historic first meeting, during which the pair signed a vaguely worded commitment to work towards a nuclear-free Korean Peninsula. But in the interim, North Korea’s nuclear and missile programs have continued unabated, and the Pentagon’s Missile Defense Review said last month that Pyongyang still represents an “extraordinary threat” to America.

Here are four reasons Vietnam is a logical choice for the next round of talks between Trump and Kim.

Although Trump did not give a precise venue for Summit 2.0, Vietnam’s capital of Hanoi and the coastal city of Danang have been floated as possible locations. Both are fewer than 2,000 miles from North Korea’s capital of Pyongyang—an even shorter hop from North Korea than Singapore.

Kim, who usually travels by armored train, does not share his father’s aversion for flying, but distance still matters: it has been suggested that North Korea’s rickety aircraft fleet is not equipped to make long-haul flights without refueling.

Vietnam was once a bitter enemy of the United States…

Like the slogans that boom out during North Korea’s annual liberation day festivities, Vietnamese wartime propaganda urged patriots to “crush the Yankee imperialists.” Vietnam and North Korea share a bitter historical enmity with the United States; Pyongyang even sent air force personnel to assist the North Vietnamese communists in their crushing victory over the U.S.-backed South Vietnamese Army. While North Korea is still a geopolitical foe of the United States, tensions between Vietnam and Washington have cooled significantly in the decades since the war, and Vietnam is now a popular tourism destination for Americans.

Vietnam and the U.S. used to “point a gun and knife at each other,” Kim Eui-kyeom, a spokesman for South Korea’s Blue House, said while commending the choice of host nation Wednesday, according to Reuters. He expressed hopes the talks would lead to “concrete, substantive progress.”

…But today Vietnam provides a model North Korea could emulate

U.S.—Vietnam relations are today more often seen through the lens of shared opposition to Chinese dominance than Cold War enmity, and the U.S. has been anxious to bolster ties with the Southeast Asian nation. One of the world’s poorest countries just 30 years ago, Vietnam has transformed into a booming middle-income economy. “In short: North Korea’s aspiration is Vietnam’s history,” wrote TIME’s Charlie Campbell last month.

That North Korea could emulate Vietnam’s economic and political reforms to achieve what Secretary of State of State Mike Pompeo described as its “miracle” is the sentiment the U.S. has been keen to push. In remarks aimed at Kim, Pompeo said, “Your country can replicate this path. It’s yours if you’ll seize the moment,” Reuters reports.

Some analysts have suggested the U.S. could use the Vietnamese location to signal it is bringing North Korea into its sphere of influence amid Washington’s ongoing trade war with China. But Adam Cathcart, a lecturer in Chinese History at the University of Leeds, says Beijing would likely welcome the opportunity for Kim to further align his image with Asia’s “more reformed or external trade-oriented economies.”

“The Chinese state media needs every bit of help it can find in projecting Kim Jong Un as a person whose main interests are economic rather than military,” Cathcart says.

Vietnam is politically neutral and secure

Hanoi has maintained diplomatic relations with Pyongyang since 1950 and Washington since 1995, and hosts embassies for both countries. In traveling there, Kim would be following in the footsteps of his grandfather, Kim Il Sung, who visited Vietnam in 1958 and was the last North Korean leader to do so.

In addition to having good relations with both countries, Vietnam retains a tight control over its internal security and media. While Human Rights Watch and other groups have criticized authorities’ crackdowns on dissent and Vietnam’s restrictions on freedom of expression, authoritarianism has not been a deterrent to international business. Hanoi was the venue for last year’s World Economic Forum on ASEAN, and Danang hosted the APEC meeting the year before. 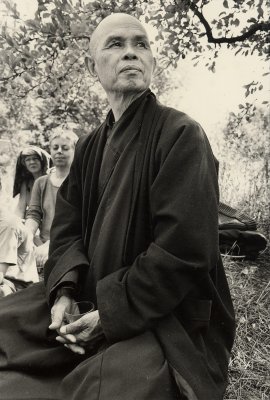 Thich Nhat Hanh, Father of Mindfulness, Awaits the End
Next Up: Editor's Pick