President Trump Used the State of the Union to Call for an End to Investigations. So Did Nixon

President Donald Trump called for the investigations against him to be brought to an end during his State of the Union speech on Tuesday. Though the President did not mention Robert Mueller by name, even as the special counsel’s probe into Russian involvement in the 2016 presidential election continues, Trump singled out “ridiculous” and “partisan” investigations, and warned that they could harm the economic “resurgence.”

“An economic miracle is taking place in the United States — and the only thing that can stop it are foolish wars, politics or ridiculous partisan investigations,” Trump said, per his prepared remarks. “If there is going to be peace and legislation, there cannot be war and investigation. It just doesn’t work that way! We must be united at home to defeat our adversaries abroad.”

Trump was not the first president to call for the end of the investigations during his State of the Union. In 1974, Nixon told Congress, “I believe the time has come to bring that investigation and the other investigations of this matter to an end. One year of Watergate is enough!”

Though he said he would cooperate with the Watergate investigation, Nixon argued that the country had other things to worry about that required Washington’s full attention. He resigned from office less than a year later, in August of that year.

Trump’s claim that the investigations will directly harm the economy appears to have a mixed basis in history.

That scandal did impact the stock market, but it ultimately bounced back. “[After] investors concluded that this event would not likely lead to recession,” Sam Stovall, chief investment strategist for CFRA, has said. “The [market] then went on to recover the entire decline and set a new all-time high.” 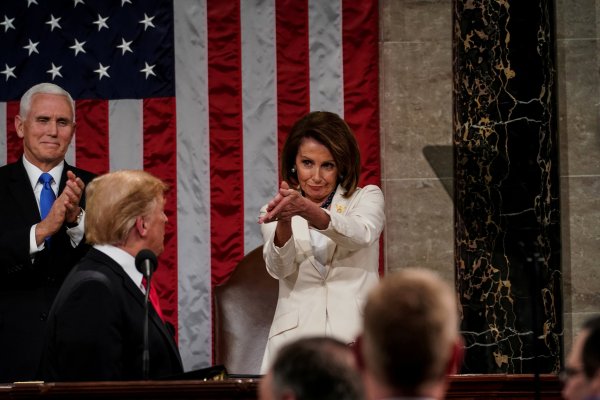 Memers Applauded Pelosi's Clapping Moment at the State of the Union
Next Up: Editor's Pick