Democratic congresswomen wore white to President Donald Trump’s State of the Union address on Tuesday — a sartorial choice meant to show solidarity, while also demonstrating the gains made by women in the 2018 midterms.

A record 127 women are currently serving in Congress, including 47 women of color. The majority – 106 – of those women are Democrats, and 21 are Republicans.

Most of those women are in the U.S. House, after 36 new women were elected in November, joining 66 female incumbents who were re-elected. There are now 102 women serving in the House — the largest number in U.S. history.

“No one has benefitted more from our thriving economy than women, who have filled 58% of the new jobs created in the last year,” Trump said in the State of the Union on Tuesday.

In response, many of the women in white stood and cheered, raising their hands and high-fiving one another in apparent celebration of their own new jobs in Congress.

“Don’t sit yet, you’re going to like this,” Trump said, before continuing his address: “All Americans can be proud that we have more women in the workforce than ever before — and exactly one century after the Congress passed the Constitutional amendment giving women the right to vote, we also have more women serving in the Congress than ever before.”

There’s a long history of women using the color white to send a political message. Women who were active in the temperance movement against alcohol in the late 19th century often wore a white ribbon bow. Perhaps most famously, white was the signature color worn by women fighting for the right to vote in the early 20th century. And later, it was the color women wore to march for the Equal Rights Amendment.

Alexandria Octavio-Cortez (C) poses for a picture with other women ahead of U.S. President Donald Trump's State of the Union address at the U.S. Capitol in Washington, DC, on February 5, 2019. Women from both political parties wore white outfits at the behest of the Democratic Women's Working Group to honor the legacy of women's suffrage in the United States.
MANDEL NGAN—AFP/Getty Images U.S. Rep

The Congressional Union for Woman Suffrage’s described the meaning behind the color: “White, the emblem of purity, symbolizes the quality of our purpose; and gold, the color of light and life, is as the torch that guides our purpose, pure and unswerving.”

Geraldine Ferraro wore white when she became the first woman vice-presidential nominee of a major party in 1984. And during her historic run for president in 2016, Hillary Clinton often sported the color, as did many of her supporters as they cast their vote for her.

Rep. Alexandria Ocasio-Cortez (D-NY) and other female lawmakers cheer during President Donald Trump's State of the Union address in the chamber of the U.S. House of Representatives at the U.S. Capitol Building on February 5, 2019 in Washington, DC. A group of female Democratic lawmakers chose to wear white to the speech in solidarity with women and a nod to the suffragette movement.
Alex Wong—Getty Images

“I wore all-white today to honor the women who paved the path before me, and for all the women yet to come,” New York Rep. Alexandria Ocasio-Cortez, one of the newly elected members of Congress, tweeted on the day she was inaugurated in January. “From suffragettes to Shirley Chisholm, I wouldn’t be here if it wasn’t for the mothers of the movement.”

She joined many of her colleagues in wearing white again Tuesday night. 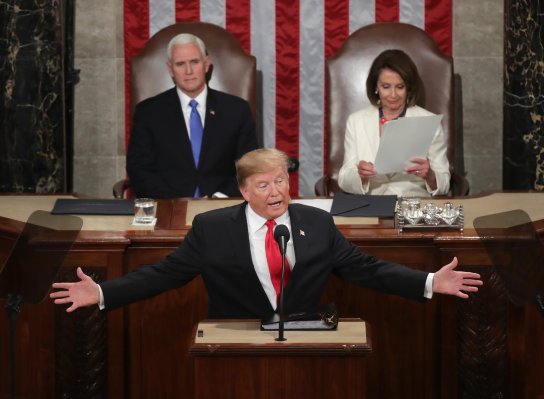 Pelosi Spent the State of the Union Reading Papers
Next Up: Editor's Pick