President Donald Trump was eager to begin his State of the Union address on Tuesday night. So eager, in fact, that he jumped right into his speech without a formal introduction.

When the president speaks in front of a joint session of Congress, it is customary for the Speaker of the House to introduce him.

Last year, the introduction at the State of the Union was given by Republican Speaker Paul Ryan. But since Democrats won control of the House in the 2018 midterm elections, Democrat Nancy Pelosi now holds the job.

Pelosi, dressed in white like many of her female Democratic colleagues, sat behind Trump during his speech on Tuesday. But after the President gave copies of his speech to her and Vice President Mike Pence, he turned around and began speaking without pausing for Pelosi to introduce him.

This change in schedule left Pelosi looking slightly confused at first, but she soon transitioned into looking at the papers in front of her as the President talked.

Pelosi and Trump have repeatedly clashed in recent weeks. She not only refused to meet the President’s demand of funding for his border wall during the government shutdown, but also uninvited him from delivering the State of the Union in the House chamber while the shutdown continued.

Once the shutdown ended, without the funding Trump had wanted for his wall, the two rescheduled his speech. 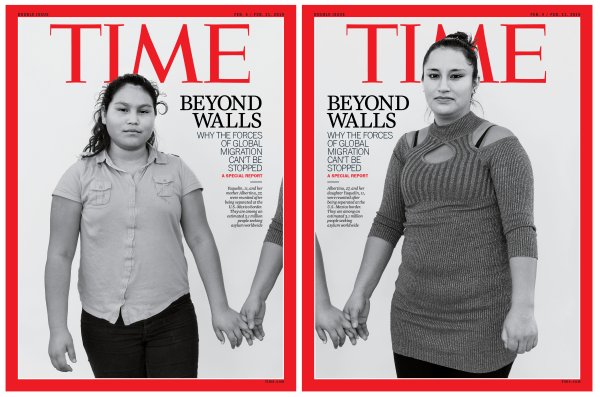 Migrants From TIME Cover to Attend State of the Union
Next Up: Editor's Pick