President Donald Trump plans to meet with North Korean leader Kim Jong Un in Vietnam later this month, he said during his State of the Union address on Tuesday night.

The summit is set to take place on Feb. 27 and Feb. 28, the President said. If the meeting takes place as planned, it will be Trump’s second time coming face-to-face with Kim over the last year. The two leaders met for a historic summit in Singapore last June, where they signed a vague agreement that said North Korea would start working toward “complete denuclearization.”

Trump touted his relationship with Kim during his speech on Tuesday, saying “our hostages have come home, nuclear testing has stopped and there has not been a missile launch in more than 15 months.”

But in reality, little progress has been made on nuclear negotiations since the leaders’ first meeting. Over the last several months, reports have said Pyongyang has actually continued to improve its nuclear arsenal.

U.S. and North Korean officials have met since the two leaders last saw each other, but U.S. intelligence officials recently told lawmakers that Kim may not completely get rid of his nuclear program.

Trump himself has expressed mixed opinions on the outlook for future talks with North Korea. During a CBS News interview on Feb. 1 he said there was “a good possibility” that Kim would not give up nuclear weapons, but added “there’s also a very good chance that we will make a deal.”

But during the State of the Union address, the President expressed much more confidence.

“If I had not been elected President of the United States, we would right now, in my opinion, be in a major war with North Korea,” Trump said Tuesday night. “Much work remains to be done, but my relationship with Kim Jong Un is a good one.”

Trump first announced his plans for the second summit with Kim in a meeting with TV news anchors hours before his State of the Union speech, as Politico first reported. 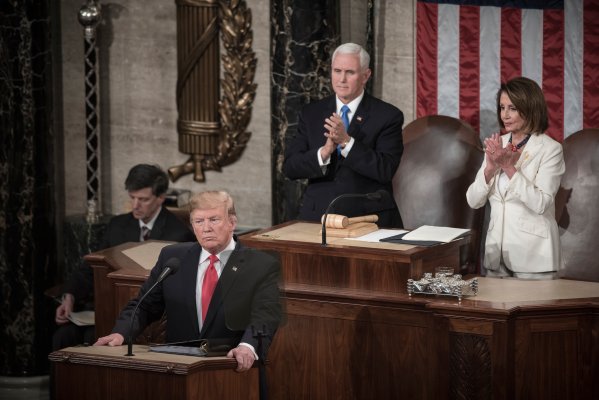 Fact-Checking Trump's State of the Union
Next Up: Editor's Pick