Trump Called for a ‘Late-Term’ Abortion Ban in the State of the Union. Abortion Rights Advocates Are Pushing Back

President Donald Trump called for a federal ban on “the late-term abortion of children who can feel pain in the mother’s womb” during the State of the Union address on Tuesday, doubling down on his criticism of a new law expanding abortion rights in New York.

“To defend the dignity of every person, I am asking the Congress to pass legislation to prohibit the late-term abortion of children who can feel pain in the mother’s womb,” Trump said Tuesday. “Let us work together to build a culture that cherishes innocent life. And let us reaffirm a fundamental truth: all children — born and unborn — are made in the holy image of God.”

His remarks further amplified the national debate over later abortion, an issue that Trump has suggested he plans to focus on in the 2020 election.

New York’s new law, the Reproductive Health Act, expanded abortion rights to allow a woman to get an abortion after 24 weeks if her health, not just her life, is threatened and if the fetus would be unable to survive outside the womb. Advocates have said the law is a necessary protection for women who otherwise have limited options in the face of health risks or serious fetal problems. Proponents have also framed it as a safeguard against a newly conservative Supreme Court that could overturn Roe v. Wade, the landmark 1973 ruling that effectively legalized abortion nationwide.

But anti-abortion advocates have criticized the law as an “extreme” expansion of abortion access that gives medical professionals too much discretion, and have falsely claimed that such legislation is tantamount to infanticide. Trump echoed that sentiment Tuesday, earning praise from groups such as Americans United for Life, which said Trump “may be the most pro-life president in American history.”

“There could be no greater contrast to the beautiful image of a mother holding her infant child than the chilling displays our nation saw in recent days,” Trump said. “Lawmakers in New York cheered with delight upon the passage of legislation that would allow a baby to be ripped from the mother’s womb moments from birth. These are living, feeling, beautiful babies who will never get the chance to share their love and their dreams with the world.”

But the New York law does not expand later abortion access to any woman with a healthy, risk-free pregnancy, and medical experts say that arguments that abortions will take place “moments from birth” are inaccurate.

“They’re using these theoretical extreme examples to try to scare people,” says Dr. Kristyn Brandi, an obstetrician-gynecologist and a board member from Physicians for Reproductive Health. She said concerns about women getting abortions while in labor are unfounded.

“No one wanted to meet my ‘living, feeling, beautiful baby’ more than me. No one is sadder that he ‘will never get the chance to share his love and dreams with the world’ than I am,” Missy Kurzweil, one of dozens of women who signed an open letter Tuesday about their later abortions, tells TIME. “My choice to have a later abortion was an act of love to ease my child’s suffering. Shame on Trump for exploiting that love to appeal to his base.”

Kurzweil, who lives in New York City, says she had an abortion in the 23rd week of her pregnancy in 2017 after discovering her baby had a rare brain disorder that could have left him living in severe pain. Kurzweil says she made an “impossible choice” with the little information available to her.

“No one wakes up 20 weeks into a gestation period and says, ‘I made a mistake.’ These are wanted pregnancies,” says Kurzweil, 33. “It really was this choice of quality of life and what is a livable life? And what are the things that would be manageable, and how much pain is sustainable?”

Trump’s call for a federal ban on later abortion because of fetal pain is based on model legislation created by the anti-abortion group National Right to Life, which praised Trump on Tuesday and said he “once again demonstrated the paramount importance of protecting mothers and their unborn children.”

There are 17 states that ban abortion about 20 weeks post-fertilization “on the grounds that the fetus can feel pain at that point in gestation,” according to the Guttmacher Institute. But scientific research has found that “fetal perception of pain is unlikely before the third trimester,” which begins around the 28th week.

“The evidence is not very clear that there’s an exact moment when the fetus can feel pain,” says Dr. Daniel Grossman, director of Advancing New Standards in Reproductive Health at the University of California, San Francisco. “There is good evidence that it can’t feel pain before the third trimester. I think that if you’re using the fetal pain argument to justify bans at 20 weeks, there really isn’t medical evidence supporting that.”

During his address, Trump also falsely claimed that Democratic Virginia Gov. Ralph Northam “stated he would execute a baby after birth.” While that’s not true, Trump was referring to Northam’s defense of a proposed Virginia bill that would have reduced restrictions to allow for abortions later in pregnancy if a woman’s health was threatened. Controversy erupted over whether the bill, which has been tabled, would allow a woman to get an abortion while going into labor

Northam, a pediatric neurologist, defended the bill and explained in an interview how he would handle a situation in which a woman went into labor during a pregnancy involving “severe deformities” or a “fetus that’s nonviable.”

Republicans immediately accused Northam of supporting infanticide. Northam’s office said his remarks were taken out of context and were only meant to explain what physicians would do in the event of a “nonviable pregnancy or in the event of severe fetal abnormalities.”

Northam’s office did not respond to requests for comment on Tuesday. (Separately, Northam is now facing calls to step down over a racist photo on his medical school yearbook page and findings that he dressed in blackface at least once.)

The original version of this story misstated a quote from Daniel Grossman. Grossman said that there is good evidence that a fetus can’t feel pain “before the third trimester,” not “before the first trimester.” 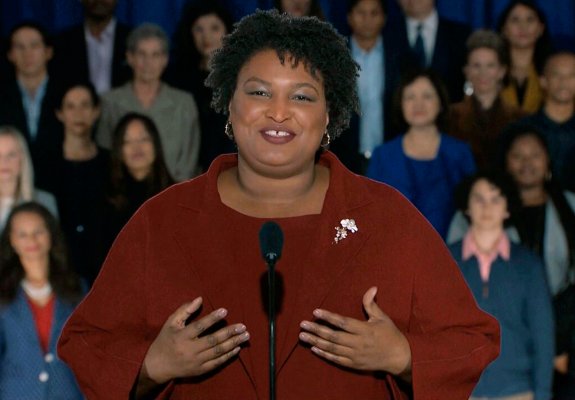 Read Stacey Abrams' Rebuttal to Trump's State of the Union
Next Up: Editor's Pick