President Trump Will Not Declare a National Emergency During the State of the Union: Report

U.S. President Donald Trump gestures during the State of the Union address in the chamber of the US House of Representatives in Washington, D.C. on Jan. 30, 2018. It was reported on Feb. 5, 2019 ahead of the State of the Union by multiple sources that President Trump will not declare a national emergency about the U.S.-Mexico border during the address unlike he speculated the week before.
Win McNamee—AFP/Getty Images
By Jennifer Jacobs / Bloomberg

(Bloomberg) — President Donald Trump has decided he won’t declare a national emergency on the U.S. border with Mexico during his State of the Union address on Tuesday, according to three people familiar with the matter.

Trump suggested last week he might declare an emergency during or shortly after the annual speech to Congress. He believes the declaration would allow him to fund construction of a border wall without congressional approval.

He had decided as of Tuesday afternoon not to make the declaration during the televised speech, one of the people said. The people asked not to be identified discussing Trump’s speech in advance and cautioned that he could change his mind before it’s delivered at 9 p.m. in Washington.

Trump caused a 35-day partial government shutdown after rejecting congressional spending bills that would have provided no new money for border wall construction and demanding $5.7 billion for his top campaign promise. He capitulated last month and signed legislation temporarily re-opening the government after Democrats agreed to appoint a conference committee to negotiate border spending, without promising any money for the wall.

The spending bill expires Feb. 15, when the government will again partially shutdown in the absence of an agreement between Congress and the president.

Trump has frequently mused to reporters about invoking emergency powers to begin construction without congressional approval. But Democrats have threatened to fight such a move in court, and the idea is unpopular even among many Republican lawmakers, who fear Trump could set a dangerous precedent for future presidents.

Immigration and border security is expected to be a major theme of Trump’s second State of the Union address. 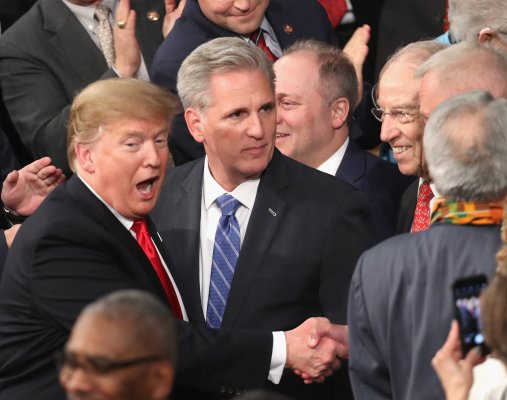 President Trump's Off-Center Tie at the 2019 State of the Union Let Loose Plenty of Jokes
Next Up: Editor's Pick