Photograph by Djeneba Aduayom for TIME
By Lucy Feldman

Forty-five years after Cicely Tyson received an Academy Award nomination for her role as Rebecca Morgan in Sounder, the actor, at age 93, ascended the stage at the Governors Awards in November 2018 and accepted an honorary Oscar.

“I just hung in there. You’ve got to live long enough,” says Tyson, now 94, whose acting credits span from her film debut in Carib Gold in 1956 to her latest appearance in How to Get Away With Murder, which she continues to film, in March of last year. Tyson appears on the cover of TIME’s second-annual Optimists issue, guest-edited by filmmaker Ava DuVernay. Her storied career — her evolution from a shy and observant child in Harlem to celebrated roles in The Autobiography of Miss Jane Pittman, The Help and A Trip to Bountiful on Broadway, as well as a Presidential Medal of Freedom, awarded to her by President Obama in 2016 — has made her an inspiration within Hollywood and beyond. Tyson spoke to TIME about her art, her optimism and why she’ll never retire.

TIME: When did you know you were an artist?

Tyson: I never knew I was an artist. As a child growing up in the church, I was always performing. My mother, my father in particular was always grooming us for some recital in the church, so we always sang or recited or I played the piano. We never thought of it as being artistry.

How did you find your way into acting?

My first real conscious awareness of what acting was was as a grown woman working after school for the American Red Cross. They were having a fundraiser, and I was asked to participate by going into a theater and taking the can to raise funds. The theater was playing at the time Arthur Miller’s The Crucible. And my God, I never saw anything like it. I get goose-pimples now when I think about it. It was the most moving thing that I had ever experienced, and I was absolutely breathless when I left the theater. However, I never thought for one moment that it was something that I would be involved in.

First of all, my mother wouldn’t hear of it. When I told her I had met someone who wanted me to be in a movie he was doing, she said, “You can’t do that.” However, he was persistent, and I was curious. This was a gentleman who was an actor turned producer, and was about to produce his first movie. I went for an interview and he gave me this book, which I now know was a script, and he suggested that we do a reading. So I sat there reading it. And he said, “No, I’m going to read this character and you read this character.” I said, “Oh,” and I guess that instinctively I did the right thing. We became the lead actors in this movie. It was independent — they did not have enough money — so they were never able to finish that film. A year or so later I got a call from the same gentleman and he said, “Well, unfortunately we were unable to finish that film, but we were able to raise money for a new one, and we still would like to have you in the lead.” The name of that one was Carib Gold.

What do you love about acting?

The thing about acting for me and why I became so enraptured by it was because it allowed me, [someone] who was so shy, to express my emotions through another individual. It wasn’t me — it was someone else. That’s how I got hooked on acting. It’s an education in and of and by itself. I do a tremendous amount of research because I have to know who this person is in order to let you know who she is. If I don’t feel that I have captured the essence of this woman, I cannot do that.

How do you face the challenges of your profession?

My mother always said, when I went out to get a job I didn’t get and came home so beaten, “Let me tell you something: what is for you, you will get. What is not for you, you will never get.” That’s the way my career has gone. I once turned down a movie that everybody thought I was crazy to do, because it wasn’t the kind of woman I wanted to project. Another actress did it, and she got a nomination for an Oscar. But what happened to me, a week after I turned it down, I got the call to do [The Autobiography of Miss] Jane Pittman. So you know, what’s for you, you’ll get. What’s not for you, you’ll never get.

How has your art changed over the years?

I don’t think the way I act has changed. It was the rock I had been searching for. It has stimulated my growth throughout the years, my curiosity about how I would go about developing the character. I add to it. For instance I said to [the producers of A Trip to Bountiful] that I didn’t know anything about Texas, and I’m going to go to Texas to find out what this woman’s life was like. I was just going to get a ticket and fly out there and roam around and eat and smell and dance and sing and whatever she did. And the next thing I knew, CBS had hired a whole team and sent a whole crew out there and they did a backup story of the making of. I said, “But I was just going to go myself to study this woman’s life.” They said, “Well, you think we’re going to let you do that and not be a part of it?”

In what ways has your work shaped who you are?

Having had the experience of learning who these various women were that I had the blessing to project, I hope that it has made me a better person. I am the sum total of each of the women I have played. That they were able to survive the times, and the way in which they did it, made me a stronger person and allowed me to truly believe that all things are possible.

You’re coming off of shooting How to Get Away With Murder. Do you ever think about retiring?

And do what? The reason why I have been in this universe as long as I have been is because he’s not ready for me. When I’ve completed my job, he’ll take me away. I know several people who have retired and then six months later, they’re gone. My rationale says to me, for years you got up in the morning, you did whatever was required of you to get ready to leave, you ate breakfast, you got in your car or on your train or the bus and you went to work. You worked all day, then you went home, and you had dinner. This is exercise that you have done for years. What is it that makes you think that you can suddenly stop doing that, and sit down all day long and watch television? We have to honor this blessed gift that we have. That’s what keeps you going. Keeps your mind fluid—your heart, your whole being. You can’t just stop, because that will be the end of you.

Do you consider yourself an optimist?

If I were not optimistic, I wouldn’t be here. Truly. Look at the state of the world today. You better be optimistic. You really do have to have faith and belief and understanding in order to survive. And know that you will not be defeated if you really think positive, about yourself and the life you’ve chosen to live.

Can you think of a time you were told your art had made an impact on someone else?

When I made the decision to use my career as my platform, to try to make a dent in some of these injustices that I witnessed and experienced in life, I said if just reach one person, one person, then I will be happy. There isn’t a day — I’m grateful to say — that when I walk out of my doors I don’t run into somebody who says, “I can’t tell you what you’ve done for me. You changed my life.” To me, you can’t buy that. It just confirmed for me that I was on the right track and I stayed on the right track. 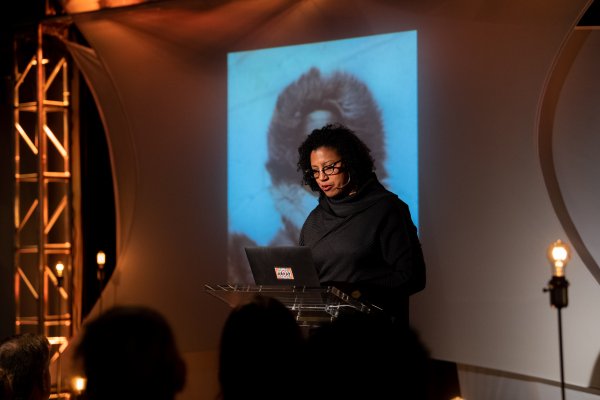 Read the Poem 'Navel' by Robin Coste Lewis
Next Up: Editor's Pick