I'm a Queer Brown Immigrant Chef. I Don't Have the Luxury of Staying Silent

It was on Sept. 11, 2001, that I decided to become a chef. As the horror unfolded that day, we didn’t know what to do but stay glued to our televisions. That evening, I went into the kitchen and started making dinner for my girlfriend—now my wife—and me. After a day of not really knowing what to do with myself, the act of cooking a meal connected with something in my soul. This was a pure act. It was optimism in the face of devastation. And it was the moment I saw the meaning behind the act of cooking a meal for yourself and those you love.

Food is family and community; it brings people together and nourishes them. But while cooking holds the potential for joy, the chef community often fails the most talented people within it.

In May 2017, I criticized the upper echelons of the fine dining industry in a New York Times profile of the chef Thomas Keller. The somewhat simple assertion that the 1% of our industry needed to go on a “woke journey” regarding their treatment of women and people of color was met with disproportionate backlash. Indignant white male chefs (and their female allies) rushed to discredit and devalue my perspective and even my credibility as an accomplished chef. “Who did I think I was?” seemed to be the theme.

It was hardly the first time in my cooking career that white men have been affronted by my assertions. Back in culinary school, I made the classic French dish Lamb Persillade with cilantro instead of parsley and finish it with a sauce infused with Indian spices. My French chef instructor firmly told me “You can’t do that.” Then there was the time I described another classic French dish Chicken Fricassee as “French Chicken Curry,” a description that left my French Chef visibly insulted. Why are we happy to believe that European cooking is somehow superior to Indian, Chinese, Jamaican, Mexican?

In many ways, this biased paradigm helps to create the inequities in our restaurant culture that lead to the type of larger abuses brought into the light in the last two years. The #MeToo movement has uncovered a myriad of abuses in the restaurant industry that must be addressed. We’ve seen countless women risk their careers and more, just to speak up about what they have endured.

Words that a friend and colleague, Shakirah Simley spoke at an event for women chefs often come back to me. “Resilience is not a choice. I, like many of the women here, have never had the luxury of opting out,” she said. She spoke of how the interwoven systems of white supremacy, patriarchy and classism means that people like us—people of a certain complexion or gender or from a particular zip code—have no choice but to be activists.

As a queer brown immigrant chef, I have no interest in backing down. Revolutions were not staged without making someone uncomfortable. Rights were not gained by accepting the status quo. When we speak up, we do so because we are full of optimism.

Back at culinary school when I was criticized for my choices, I knew that making food was not about the “right way.” It is about sharing, nourishment, healing. That’s what I was looking for on Sept. 11. The joy I feel in cooking the food of my culture and bringing those flavors and feelings to people gives me a deep sense of pride in my cultural heritage. That joy is what keeps me going—and keeps me speaking up to make our community of chefs a better one. 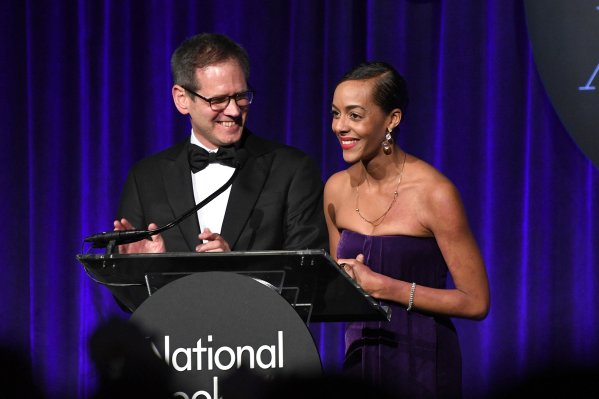 Stop Saying Books Are Dead. They’re More Alive Than Ever
Next Up: Editor's Pick