Newly minted Presidential candidate Cory Booker will use the State of the Union to spotlight his dedication to criminal justice reform and highlight the benefits of bipartisan compromise.

The New Jersey senator will be bringing Edward Douglas, a former prisoner from Chicago, to the State of the Union on Tuesday. Douglas was given a lifetime prison sentence in 2003 for selling 140 grams of crack cocaine, but was eligible for release after Trump signed the First Step Act into law last December. Douglas was released on Jan. 10.

“This isn’t just about me,” said Douglas. “I was one of the first ones to benefit from the First Step Act, but there are people right now that are still locked away for harsh penalties that far outweigh the crimes they committed. This is the first step of my reentry and legislative reform. I am hopeful that, like me and the men and women I left behind in prison, America is also ready for positive criminal justice change.”

Every member of Congress is permitted to bring one guest to the State of the Union. Their selections, which often occupy chatter on Capitol Hill in the days preceding the address, often are deliberately meant to reflect a policy or issue about which the lawmaker feels most passionate.

Criminal justice reform has been a longtime key legislative priority for Booker, an interest he has attributed to his years in the Newark city government. Booker was an original co-sponsor of the First Step Act, and was instrumental in pushing to include the provision to curtail solitary confinement among young prisoners. The legislation includes programs like job training for federal prisoners and anti-recidivism efforts. It also makes retroactive the 2010 law reducing sentencing disparities for crack and powder cocaine, which disproportionately impacted African-Americans.

“Edward’s experience illuminates the deep injustices that exist within our broken criminal justice system — a system that preys upon our most vulnerable communities — the poor, the mentally ill, people of color,” said Booker. “Edward’s story also shows our capacity for redemption and how the First Step Act is changing people’s lives.”

Booker is not the only person bringing a beneficiary of the law to the State of the Union: President Donald Trump is bringing Matthew Charles, another man released from prison because of it.

While the bill’s passage gave Trump a bipartisan victory he sorely needed, it was no small feat for the senators who had been crafting the legislation for years. Booker’s role in passing this bill consequently showcases an ability to work across the aisle in a highly polarized political environment — an asset he will no doubt he touting in the weeks ahead as he travels to Iowa and New Hampshire. 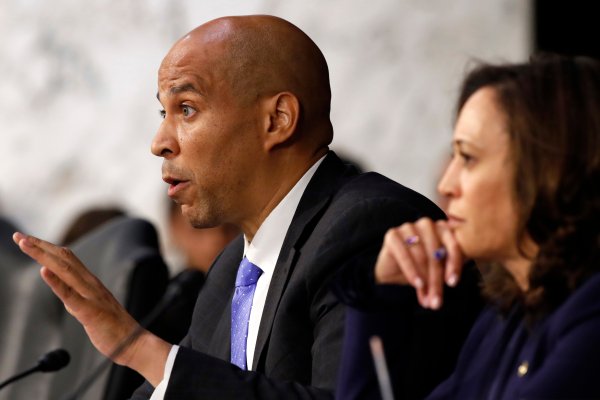 Here's Who the 2020 Presidential Candidates Are Bringing to the State of the Union
Next Up: Editor's Pick