The 60-year history of the Grammys is littered with lapses in judgment: Macklemore over Kendrick Lamar, Beck over Beyoncé, Milli Vanilli over literally anyone. This year’s 61st Annual Grammy Awards, which air on Sunday, Feb. 10 after a year of turmoil for the Recording Academy, present another opportunity for fresh embarrassment.

But many are hopeful that new rule changes, including the increased number of nominees in major categories, will improve the quality, relevance and diversity of the winners at the 2019 Grammys. As the show looms, TIME writers Raisa Bruner and Andrew R. Chow discuss the nominees and make their picks for who deserves to win in the major categories—and who will probably end up taking home the hardware.

By the Way, I Forgive You — Brandi Carlile

Raisa Bruner: Janelle Monáe’s Dirty Computer is a beautifully executed and cohesive project from a mature artist who knows exactly what she wants to say. She even put out an entire visual project with the album, á la Beyoncé’s Lemonade. And Drake’s Scorpion was another streaming blockbuster with multiple viral hits.

But this was Cardi B’s year. Invasion of Privacy cemented the firebrand Bronx rapper as much more than a fleeting sensation. The album came stacked with unimpeachable production and showed her range—from the undeniable summer smash “I Like It” featuring J Balvin and Bad Bunny to moments of surprising delicacy, like on “Thru Your Phone.” The album was both a commercial and critical success by any standard, establishing Cardi B as a force well beyond the confines of hip-hop or social media stardom.

Andrew R. Chow: Cardi was a freight train that pummeled through music, social media, and politics—and a win for her would be emblematic of a sea-change year in which hip-hop ruled the pop world like never before. But since the Grammys voter base skews old and white—only two hip-hop records have ever won Album of the Year—there’s a real possibility that hip-hop-oriented academy members split the vote between her, Drake, Post Malone and Lamar, paving the way for a Brandi Carlile upset. Carlile has intergenerational appeal and is a wise and incisive storyteller—and her Obama association could make voting for her a tacit act of resistance.

But By the Way, I Forgive You is not her strongest work. I’m hoping that Musgraves, who is in many ways an inheritor of Carlile’s stormy independence and shrewd songcraft, will take home the award. The hazily gorgeous songs of Golden Hour combine the mythos of the Wild West with the more mundane anxieties of the digital age; they are buoyed by both crushing heartbreak and the resilience that follows.

“This Is America” — Childish Gambino

“All the Stars” — Kendrick Lamar and SZA

Bruner: Donald Glover (who performs as Childish Gambino) may be the likely winner, but let’s not discount the pure ubiquity of boogaloo-sampling “I Like It,” following in the footsteps of “Despacito.” Who didn’t want to start dancing as soon as it came on? Of course, that’s not the bar that a Record of the Year traditionally has to pass—but maybe it should be! As for “The Middle,” credit is due to Zedd and Grey, who patiently tried out nearly a dozen of pop’s top voices before deciding on Morris as the perfect fit, turning it into a country-EDM crossover success. Cross-genre collaborations are hit or miss, but this group showed that patience and musical chemistry are important.

Chow: “The Middle,” is, well, middling. I heard it dozens of times throughout the year, and every time failed to recognize it until that strained chorus, which makes my own throat sore; Morris’s normally charming voice is drenched in layers of production syrup. “I Like It” is a much more pleasant A&R genre Frankenstein—and the Grammys would be infinitely better with a Cardi B acceptance speech.

Chow: This category tends to reward anthemic and anguished rock songs (“Hello,” “Stay With Me,” “We Are Young,” “Need You Now”), which makes “Shallow” a shoo-in winner. It doesn’t hurt that “A Star Is Born” devoured the Internet and the rest of the pop culture landscape this summer, nor that Bradley Cooper and Lady Gaga are fresh on everyone’s minds in the midst of a very charming (if fatigued) awards campaign.

“Shallow” also happens to be the best song of the lot, exquisitely paced and bursting with wide-eyed aspiration. It could have been a hit at any point since the 70s; for Stevie Nicks and Jackson Browne, maybe, or Shania Twain and Tim McGraw twenty years later. And while “Boo’d Up” and “God’s Plan” are catchier, they lack the gut punch of Gaga’s guttural howl.

Bruner: I agree: this is “Shallow”’s trophy to lose. (And a loss—given the song’s success across other awards shows so far this season—would be a true surprise.) But I’d also like to extend some recognition to “In My Blood,” which is a powerful and surprising anthem to acknowledging, managing and overcoming anxiety. It would be easy to write off Shawn Mendes as a teen heartthrob, but this single proved he had something more to say as an artist and individual. In a year marked by major growth in conversations about mental health, “In My Blood” felt exactly of its moment.

Chow: What a mess. We have Margo Price—who won an “Emerging Artist of the Year” award three years ago—alongside Greta Van Fleet, who is Led Zeppelin but for Urban Outfitters. Meanwhile, revelatory newcomers like Ella Mai, Lil Baby and Juice WRLD are nowhere to be found. (And that’s to say nothing of indie darlings like Snail Mail and the Beths.)

I would bet on H.E.R., the reclusive R&B singer, to take home the cursed award, given that she also snagged an Album of the Year nomination. She is a worthy choice—but the Grammys will probably be kicking themselves in 10 years, when Dua Lipa is embarking on her fifth sold-out world tour.

Bruner: The Recording Academy’s love for H.E.R. across the big categories definitely suggests she’s the artist to beat here, especially since she will most likely not convert her other nominations into wins against established names. This is a deep field, though: Dua Lipa has already become one of the most important pop voices of her generation, Bebe Rexha has been a definitive pop act for the better part of a decade and Chloe x Halle are just getting started as Beyoncé’s seriously precocious protégés. But don’t count out Jorja Smith, who was last year’s Critics Choice at the Brit Awards—an honor shared by Adele and Sam Smith in past years—and has the kind of silky, soulful voice that feels timeless.

“This Is America” — Childish Gambino

Bruner: This should be Glover’s win. “This Is America” had so much to say—as a song, yes, but particularly as a video. It was a viral conversation starter the moment it premiered, and it powerfully reflected the complexity of blackness in America today. Of course, Beyoncé and Jay-Z did get to film their joint video in The Louvre. But when it comes to story, Glover’s willingness to be unsettling and triumphant in equal measure is miles ahead.

Honorable mention, however, should go to Janelle Monáe’s “Pynk.” Rarely—if ever—have we seen a celebration of female sexuality filled with so much unabashed joy.

Chow: “This is America” is miles ahead of all of these videos except one: Tierra Whack’s “Mumbo Jumbo,” a dadaist horror experiment and a gripping social commentary. Still, Glover deserves the nod, for the way in which he and director Hiro Murai turned a relatively conventional trap song into a Trojan horse to force 478 million people (and counting!) to reckon with gun violence and performative black joy.

Glover spastically danced in a barren warehouse for his “Freaks and Geeks” video in 2011; eight years later, he used the flexible and frightening space to comment on the central ways in which black bodies are broadcast, whether in mandated viral dance crazes or lying lifeless on street corners. And Murai, the mastermind behind many episodes of Glover’s “Atlanta,” is long overdue for his first Grammy, after years of directing inventive music videos for Glover, Usher, the Shins and many more. 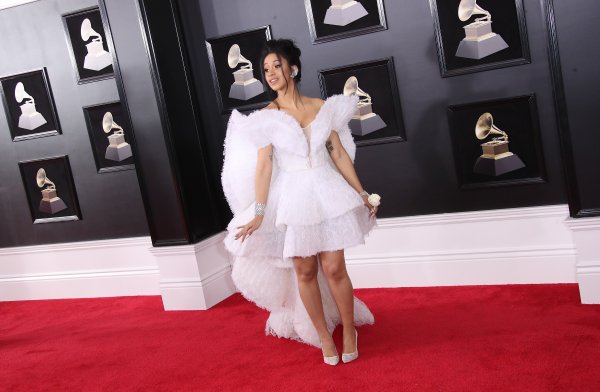 Everything You Need to Know About the 2019 Grammys
Next Up: Editor's Pick