Steve Buscemi and Daniel Radcliffe's Miracle Workers Confirms It: The Afterlife Comedy Is a Trend

In the beginning, God created Heaven Inc. and the earth. And the earth was a hot new innovation overseen by the angels at God’s celestial startup—a goofy blue planet where each human creature was endowed with free will. Several eons later, all that choice had yielded overpopulation, climate change and lots of senseless violence. God—by now an exasperated, disengaged CEO holed up on his office couch in a bathrobe—started making plans to destroy his flawed creation and conjure something better. A restaurant at the center of a lazy river, perhaps.

This speculative history of the universe comes courtesy of the punchy new TBS comedy Miracle Workers, which premieres on Feb. 12. In a divine casting choice (that only came about after Owen Wilson left the role), Steve ­Buscemi plays a coarse, spoiled Supreme Being. The only souls standing between him and the apocalypse are nerdy Craig (Daniel Radcliffe, in Hufflepuff mode) and his brash new co-worker Eliza (Blockers standout Geraldine Viswanathan), angels who run the neglected Department of Answered Prayers. Left to his own devices, Craig helps humans find lost keys; bigger asks get stamped IMPOSSIBLE and sent upstairs to God, who ignores them. Eliza’s crusade to make the deity do his job backfires, leaving her and Craig with two weeks to save Earth—by getting two awkward, mutually infatuated ­mortals to kiss.

It’s a high-concept sitcom, but one whose afterlife setting has become weirdly popular among TV’s most ambitious comedies. NBC’s The Good Place, Amazon’s Forever and Netflix’s Russian Doll all follow flawed characters on odysseys through the firmament, as they reckon with mistakes they made in life. Beyond the jokes, cosmic and otherwise, these series pose elemental questions about human existence: How do we live good lives? How can we move on from formative trauma? What do we owe to others, whether they’re strangers or spouses?

Miracle Workers is lighter, sillier and often raunchier than its predecessors. Its doesn’t have the same blunt emotional force as the marriage at the center of Forever or the history that haunts Natasha Lyonne’s Russian Doll heroine. There are no ethics lessons like the ones philosophy professor Chidi teaches his buddies in The Good Place, but there is a hilarious episode where God goes home to his more successful family. Creator Simon Rich (Man Seeking Woman), who wrote the novel Miracle Workers is based on, even devotes a side plot to God’s efforts to destroy atheist gadfly Bill Maher’s (literal) manhood.

You’re not likely to come out of any episode reconsidering the meaning of life, in other words. But under­lying Rich’s farce is a sharp—and bleak—­analogy for the state of the world: Heaven Inc. is failing because it can’t make 7.5 billion individuals happy when their fates are so tightly entwined that one person’s godsend is sure to be another’s curse. (This calls to mind a recent Good Place wrinkle, the revelation that the moral complexity of modern life has made it impossible for even the best humans to make heaven-worthy choices.) As time passes, misery proliferates.

Yet Miracle Workers is ultimately a love letter to free will. In fact, though they can certainly get dark, each of the afterlife comedies functions as a reminder of our best selves, if not a full-throated defense of the human race. Abstracted from real religious doctrine, these parables suggest that we make virtuous decisions when given the experience, knowledge and means to do so—or, at least, that those of us who do will eventually be rewarded.

You can see why this fantasy resonates in 2019: When goodness and earthly success can seem antithetical to each other—when neo-Nazis get a foothold in mainstream politics, when credible sexual-assault charges can’t keep a man from ascending to the top of the entertainment industry or even the government­—it’s comforting to imagine divine justice. These shows aren’t necessarily pure escapism, though. At their best, each one is a challenge to live as though some heavenly arbiter is watching. 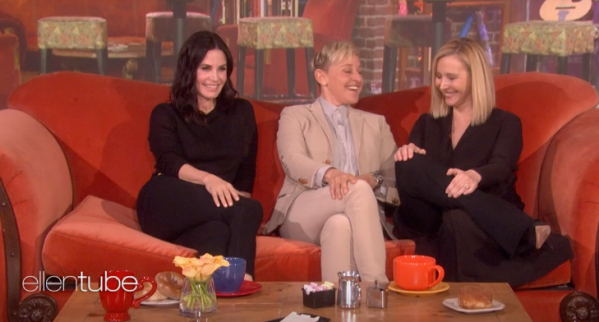 Here's a Mini 'Friends' Reunion Featuring the Central Perk
Next Up: Editor's Pick