In the wake of President Donald Trump’s renewed attacks on the U.S. intelligence community this week, senior intelligence briefers are breaking two years of silence to warn that the President is endangering American security with what they say is a stubborn disregard for their assessments.

Citing multiple in-person episodes, these intelligence officials say Trump displays what one called “willful ignorance” when presented with analyses generated by America’s $81 billion-a-year intelligence services. The officials, who include analysts who prepare Trump’s briefs and the briefers themselves, describe futile attempts to keep his attention by using visual aids, confining some briefing points to two or three sentences, and repeating his name and title as frequently as possible.

What is most troubling, say these officials and others in government and on Capitol Hill who have been briefed on the episodes, are Trump’s angry reactions when he is given information that contradicts positions he has taken or beliefs he holds. Two intelligence officers even reported that they have been warned to avoid giving the President intelligence assessments that contradict stances he has taken in public.

That reaction was on display this week. At a Congressional hearing on national security threats, the leaders of all the major intelligence agencies, including the Directors of National Intelligence, the CIA and the FBI contradicted Trump on issues relating to North Korea, Russia, the Islamic State, and Iran. In response, Trump said the intelligence chiefs were “passive and naïve” and suggested they “should go back to school.”

The reporting for this story is based on interviews with multiple officials who have first hand knowledge of the episodes they describe, and multiple others who have been briefed on them. Asked in detail about the officials’ concerns, senior White House and National Security Council officials declined to comment.

The problem has existed since the beginning of Trump’s presidency, the intelligence officials say, and for a time they tried to respond to the President’s behavior in briefings with dark humor. After a briefing in preparation for a meeting with British Prime Minister Theresa May, for example, the subject turned to the British Indian Ocean Territory of Diego Garcia. The island is home to an important airbase and a U.S. Naval Support Facility that are central to America’s ability to project power in the region, including in the war in Afghanistan.

The President, officials familiar with the briefing said, asked two questions: Are the people nice, and are the beaches good? “Some of us wondered if he was thinking about our alliance with the Brits and the security issues in an important area where the Chinese have been increasingly active, or whether he was thinking like a real estate developer,” one of the officials said wryly.

In another briefing on South Asia, Trump’s advisors brought a map of the region from Afghanistan to Bangladesh, according to intelligence officers with knowledge of the meeting and congressional officials who were briefed on it. Trump, they said, pointed at the map and said he knew that Nepal was part of India, only to be told that it is an independent nation. When said he was familiar with Bhutan and knew it, too, was part of India, his briefers told him that Bhutan was an independent kingdom. Last August, Politico reported on president’s mispronunciation of the names of the two countries during the same briefing.

But the disconnect between Trump and his intelligence briefers is no joke, the officials say. Several pointed to concerns regarding Trump’s assessment of the threat posed by North Korea’s nuclear capabilities. After Trump’s summit with North Korean leader Kim Jong-Un last summer, the North claimed to have destroyed its major underground nuclear testing facility at Punggye-ri, and Trump has gone out of his way to credit the claim.

The National Geospatial-Intelligence Agency (NGA), which oversees the spy satellites that map and photograph key areas, had tried to impress upon Trump the size and complexity of the North Korean site. In preparing one briefing for the President on the issue early in his administration, the NGA built a model of the facility with a removable roof, according to two officials. To help Trump grasp the size of the facility, the NGA briefers built a miniature version New York’s Statue of Liberty to scale and put it inside the model.

Intelligence officials from multiple agencies later warned Trump that entrances at the facility that had been closed after the summit could still be reopened. But the president has ignored the agencies’ warnings and has exaggerated the steps North Korea has taken to shutter the facility, those officials and two others say. That is a particular concern now, ahead of a possible second summit with the Kim Jong-Un later this month.

The briefers’ concerns are spread across multiple areas of expertise. Two briefers worry that a summit with Chinese President Xi Jinping could produce a trade agreement that the President can trumpet but that fails to address China’s espionage, its theft of intellectual property that ranges from circuit boards to soybean hybrids, its military buildup, and its geopolitical ambition.

Three other officials worry about what one of them calls “precipitous troop withdrawals” from Syria and Afghanistan and a peace deal with the Taliban that in time would leave the extremist Islamic group back in charge and wipe out the gains made in education, women’s rights and governance since the U.S. invaded the country more than 17 years ago.

For now, the briefers are heartened by the intelligence community leaders who risked Trump’s ire by contradicting him in public testimony this week.

The danger, one former intelligence official said, is that those leaders and other intelligence briefers may eventually stop taking such risks in laying out the facts for the President.

The original version of this story misstated the abbreviation for the National Geospatial-Intelligence Agency. It is NGA, not NGIA. 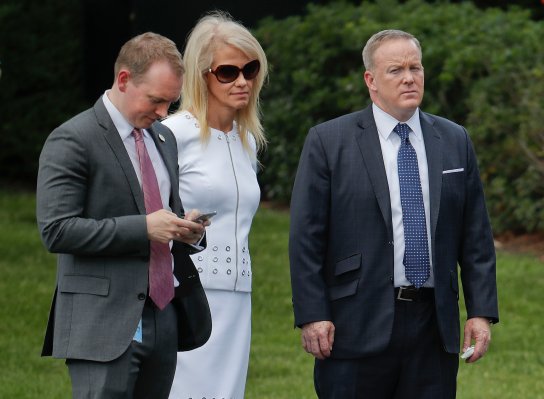 Trump's Threats to Ex-Staffers Reveal a Loyalty Problem
Next Up: Editor's Pick