El Chapo, the Notorious Drug Kingpin, Has Been Found Guilty in His U.S. Trial

Notorious kingpin Joaquin “El Chapo” Guzman was found guilty Tuesday of all charges stemming from his role in trafficking billions of dollars worth of drugs into the U.S. as a top boss within the Sinaloa cartel.

In the sixth day of deliberations, a jury convicted the 61-year-old drug lord, who has been standing trial in federal court in Brooklyn since mid-November. Guzman, who infamously escaped from two top security Mexican prisons, now faces life behind bars in the U.S. Before he was led out of the courtroom, Guzman turned to his wife Emma Coronel Aispuro, who flashed him a thumbs up and nodded at him.

The jury’s unanimous verdict, which came after about 34 total hours of deliberation, was a major blow to Guzman and his team of defense lawyers, who had been bumping fists and hugging each other in near celebration after the first week of deliberations ended without a verdict. On Feb. 6, defense attorney Eduardo Balarezo even prematurely tweeted out a photo of a pistol-shaped Mexican tequila bottle, captioned “For after trial.”

At a press conference after the verdict, the defense team said they were perhaps too hopeful. They said Guzman remained “upbeat” and “strong,” despite the conviction. “He’s as cool as a cucumber this guy,” attorney Jeffrey Lichtman said, adding that the defense team planned to appeal. Lichtman said Guzman’s conviction was a “trophy for the government,” but that it would not ultimately hinder the illegal drug trade.

Speaking to reporters, U.S. Attorney Richard Donoghue disagreed, calling Tuesday’s conviction a “victory for the American people.” The trial, he said, “pulled back the curtain on international drug dealing” in a way no other trial has. “This is a day of reckoning,” Donoghue said. “It is a sentence of which there is no escape and no return.”

Guzman is expected to be sentenced June 25. Donoghue said the conviction will likely bring a sentence of life in prison without the possibility of parole.

During the high-profile trial, the jury—made up of eight women and four men—heard testimonies from 56 witnesses. Fourteen of them were admitted criminals who testified against Guzman in cooperation with the U.S. government. A dozen of them struck deals with prosecutors, which the defense team latched onto while questioning their credibility. Many of the cooperators were former cartel members and, at some point, Guzman’s closest confidantes.

Defense lawyers argued Guzman was being framed, saying he was the scapegoat for the real leader of the Sinaloa cartel, Ismael “El Mayo” Zambada, who is still wanted. The defense consistently aimed to discredit the turncoat members of Guzman’s inner circle during cross-examinations. In his closing arguments, Lichtman slammed the cooperating witnesses as “lying opportunists” who he said gave false testimonies in exchange for reduced prison sentences. He added that the convicts were “cleaned up and put on display” in the courtroom to play their part in the prosecutors’ “scripted event.”

But that did little in the end to sow enough doubt. Prosecutors had spent weeks painting Guzman as a ruthless murderer who regularly resorted to violence and corruption to build and defend the multi-billion dollar criminal enterprise he led. Assistant U.S. Attorney Andrea Goldbarg told the jury an “avalanche of evidence,” including intercepted text messages and audio recordings, proves Guzman’s guilt “through the defendant’s own words.”

Goldbarg said the defendant was standing trial in Brooklyn, part of the Eastern District of New York, where he brought nearly four tons of cocaine. That amounted to about $5 million in profits at the expense of New Yorkers, the prosecutor said.

Testimonies exposed the extent of the cartel’s corruption and how it had breached the highest levels of the Mexican government and its police force. One of the most damning allegations to emerge from the trial is the claim that Guzman paid former Mexican President Enrique Peña Nieto $100 million to stop looking for him while he was on the lam. Peña Nieto’s former chief of staff has vigorously denied the claim. Lichtman, the defense lawyer, said Guzman didn’t even have enough money to pay his workers, much less the means to dole out $100 million in one sitting.

Besides the former cartel members, the jury also heard examples of this widespread corruption from U.S. law enforcement agents. In his witness testimony, U.S. Drug Enforcement Administration (DEA) Agent Victor Vazquez explained how that corruption may have also hindered previous efforts to capture Guzman and other cartel leaders. The DEA agent told the jury that the 2014 mission to recapture Guzman in Mazatlán, Mexico could only succeed if it was kept secret from the Mexican police. “Simply,” he said, “the corruption level—using them again was not going to work.”

The proceedings offered a rare peek into the reality of how a massive criminal enterprise is run on a daily basis. In 2008, Guzman commissioned an encrypted communication network used among members of his inner circle to evade authorities, according to witness testimony. The technology led to his downfall when the Colombian I.T. specialist who built the network for him betrayed him and gave U.S. authorities key access to the entire system. Prosecutors used the intercepted messages from the system as evidence of Guzman’s drug trafficking activities.

The trial, prosecutors said, also revealed all the innovative ideas Guzmán initiated to secretly ship significant amounts of narcotics into the U.S. almost undetected. He used planes, trains, cars, and submarines—and even smuggled hundreds of millions of dollars worth of cocaine across the U.S.-Mexico border by hiding the drugs in jalapeño pepper cans. “It was his skill to come up with new ways to send drugs that kept him at the top of the cartel,” Goldbarg told the jury.

Guzman is perhaps most famous for breaking out of two Mexican prisons. In 2001, he first escaped from the Puente Grande prison by hiding in a laundry cart. He was recaptured in 2014 in Mazatlán, Mexico—only to break free from the Altiplano prison, using a sophisticated mile-long tunnel in 2015. Guzman was re-arrested the next year and extradited to stand trial in the U.S. in 2017.

Goldbarg alluded to the repeated jail breaks in her closing arguments. “Do not let him escape responsibility,” the prosecutor urged the jury. “Hold him accountable for his crimes.”

It’s unclear whether the trial will have any far-reaching implications in the fight against drugs. Researchers have long found that the demise of individual kingpins may in fact do little to impact the illegal drug trade, as other criminals will step up to take over the vacant roles, often triggering more violence.

Mexican criminal enterprises like the Sinaloa Cartel pose the greatest illegal drug threat to the U.S., according to the DEA’s latest National Drug Threat Assessment. The cartels are also believed to be responsible for record-breaking levels of violence in Mexico. In 2018, Mexican officials opened 33,341 murder investigations, a 33 percent increase over the prior year and a new high.

“The violence now associated with drug trafficking organizations in Mexico is of an entirely different scale,” analyst June Beittel wrote in a 2018 Congressional Research Service report about organized crime, which was unrelated to Guzman’s federal trial.

Since Mexican President Andrés Manuel López Obrador assumed office in December, no drug kingpins have been arrested there—a status that’s unlikely to change anytime soon. On Jan. 30—the very day prosecutors gave their closing arguments in the El Chapo trial—President Andrés Manuel López Obrador declared an end to his country’s war on drugs, saying he would no longer prioritize capturing cartel bosses, in hopes of breaking the cycle of violence. “[Arresting them] is not our main purpose,” said Obrador. “The main purpose of the government is to guarantee public safety.”

Obrador’s announcement was met with skepticism that it would lead to any real change in Mexico. But even as the most famous example of such an arrest played out in Brooklyn, the trial of El Chapo—full of revelations as it was—offered little by way of another path forward. 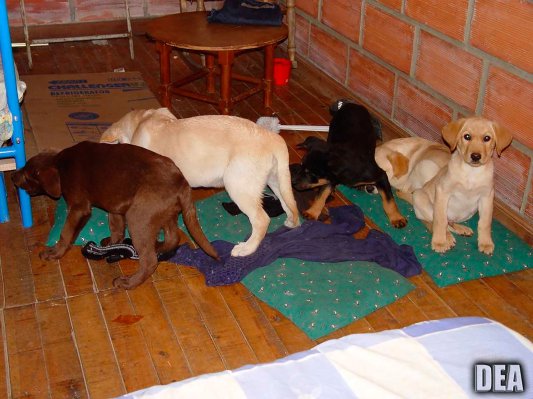 Veterinarian Who Smuggled Liquid Heroin Implanted Inside Puppies Sentenced to 6 Years in Prison
Next Up: Editor's Pick