21 People Died in Weather-Related Incidents During the Polar Vortex

At least 21 people have died in weather-related incidents brought on by the extreme cold snap that hit much of the United States this week.

The official cause of a number of the deaths remain inconclusive. The toll includes a University of Iowa student who was found apparently frozen to death on Wednesday; a 38-year-old woman found frozen in her home where the thermostat had malfunctioned in Milwaukee, a man was also found dead in his garage in Milwaukee after an apparent collapse while he was shoveling; and a man found frozen to death in Ecorse, Mich. Vehicle incidents have also claimed lives — a snow plow struck killed a 75-year-old man in Chicago on Monday and a couple in Indiana died after their car was hit on icy roads.

Temperatures in the Midwest dipped dangerously low over the week, hitting a record-breaking negative 31 degrees on Thursday in Rockford, Illinois and minus 30 degrees in Cedar Rapids, Iowa. In Chicago, temperatures dropped to around negative 21 degrees, while Milwaukee recorded minus 25 degrees and Minneapolis reported negative 24 degrees. Wind chills made things even colder.

People who spend any time outside in freezing or sub-zero temperatures can very quickly deteriorate and die in under 24 hours, according to Stathis Poulakidas, a trauma and burn specialist at John H. Stroger Jr. Hospital in Chicago.

It takes anywhere from three to 15 minutes to develop frostbite, Poulakidas says. Similarly, hypothermia sets in when the body’s temperature drops from its regular 98 degrees to 95; it can rapidly decline from there, reducing mental awareness and slowing down a person’s alertness.

“That will make you want to lie down on the ground,” Poulakidas says. “You can drop ten degrees in an hour if you’re sitting on snow. The temperature will fall to a point where they cease blood flow. They end up dying from severe hypothermia.”

Poulakidas has treated at least 50 frostbite cases alone this week, a number he expects to grow significantly. Multiple patients have been scheduled to receive amputations in the coming weeks due to the extent of their injuries.

“We’re just scratching the surface,” he says, noting that a similar weather event in 2014 brought in about 150 cases of frostbite, extending to whole legs and arms that had to be removed. “We’re going to be amputating digits and limbs over the next two to three weeks.”

Even going outside at 32 degrees Fahrenheit, the freezing point for water, brings a risk of hypothermia and frostbite for humans, according to Poulakidas. People spending time outdoors in such conditions will feel decreased sensations in their fingers and limbs. “That will give you increased confidence to stay out longer, which can lead to injury,” he says.

The people most at risk during such severe cold spells are the homeless population in the affected areas, those whose jobs require outside work, such as postal service employees and construction workers, and anyone who is intoxicated and outside. Poulakidas says a common misconception is that alcohol warms people up. “It doesn’t,” he says. “It dumbs down your senses.”

He advises people to really limit how much time they have to be outside and to watch out for others.

“Get homeless folks to warming centers. Track elderly, make sure they don’t slip and fall on the ice,” he says. “Be cautious with young, they can sustain more serious injuries. Short periods of time could cause severe injuries.” 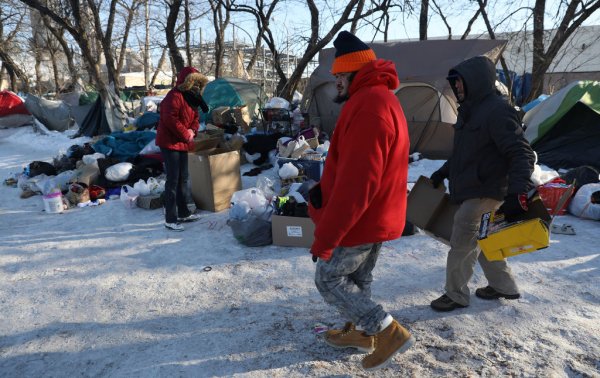 Good Samaritan Spots Hotel Bill for 70 Homeless in Chicago
Next Up: Editor's Pick