Howard Schultz Could Flip the 2020 Election. Just Not Necessarily to Trump's Favor

As a caffeine magnate, Howard Schultz, the billionaire former CEO of Starbucks, spent decades causing Americans to lose sleep. In the few days since he indicated a strong desire to run for President, Schultz has contributed to an extra dose of insomnia to the many Democrats who dread a second term for President Donald Trump.

Seeing as Schultz is a self-proclaimed “lifelong Democrat,” the reflective forecast from the sidelines has largely been that a well-funded Schultz candidacy would poach enough votes from whoever winds up as the actual Democratic candidate that Trump would waltz to victory. This seems like a reasonable conclusion, but it ignores a much safer one: There is no accounting for the tangled and largely unreadable psychology of the American voter, particularly when it comes to third-party candidates.

What we do know is that, putting aside the sui generis case of the 2000 presidential election, it is uncommon for a third-party candidate of any persuasion to spoil even a very close election unless you make some absurd assumptions.

Most recently, there was some speculation as to whether Green Party candidate Jill Stein tipped the scales to Trump by siphoning off just enough votes from Hillary Clinton to hand Trump narrow victories in Pennsylvania, Michigan and Wisconsin. We can game this out pretty easily by making two estimates:

Rather than invent figures for those two variables, for which exit polling is absolutely useless, I calculated every possible combination of values in 5-point intervals from 0 to 100. The following grid shows the percentage of Stein supporters who would otherwise have voted for Clinton or Trump on the horizontal axis, and how those voters would have split between Clinton and Trump on the vertical axis, from 0 (universal support for Trump) to 100 (every vote going to Clinton.) You can tap or click individual squares to see the electoral college outcome for each pair of values.

These calculations apply the turnout and party-preference figures for each square to every state individually, adding varying portions of Stein’s votes to both Clinton and Trump and recomputing the electoral college vote whenever a state flips.

As you can see, Green Party voters could have turned over the election to Clinton only in the unlikely event that virtually all of them showed up on Election Day and voted Democratic instead. Only Michigan, Pennsylvania and Wisconsin were close enough to flip if Clinton could have absorbed almost all of Stein’s voters, who totaled 1,457,218 nationwide.

Trump Lashes Out as His Election Prospects Darken

The 1992 election is more interesting because Ross Perot, who like Schultz was an extremely wealthy businessman with no political bone fides, won 19% of the popular vote — a tremendous windfall for a modern third-party candidate. But even Perot’s 19.7 million voters are very unlikely to have handed a reelection to President George H.W. Bush, a fellow Texan, unless they showed up in large numbers and contributed very little to Clinton’s state totals. Here’s the same chart from 1992:

As a thought experiment, what if someone like Schultz had run in 2016? Here’s where things get interesting. With two businessman and political neophytes in the race, one of whom (Trump) was the Republican nominee and the other running as an independent, it’s impossible to predict how voters would have reacted. Instead of imagining how an existing candidate’s voters would have split between Clinton and Trump, we can reverse the scale and estimate how many votes this hypothetical Independent would have drawn away from the major tickets.

Here’s a scenario that estimates the third-party candidate’s share of the popular vote from 0 to 25 percent (horizontal axis) and how many votes he or she would have drawn from Trump versus Clinton, with 0 being all from Clinton and 100 being all from Trump (vertical axis). Since this scale is measuring votes subtracted instead of votes added, as in the two charts above, it measures Trump’s losses instead of Clinton’s gains to be visually consistent.

Here we see a much more volatile scenario. Even if this ur-Schultz candidate drew 5 percent of the popular vote from Clinton and Trump, with just a 60-40 split in Clinton’s favor, the election would have flipped. These calculations assume that the hypothetical third-party candidate’s votes are all drawn from the existing national total in 2016, and accounts for the fact that about 6 percent of his or her voters would be drawn from other third-party candidates. Any new supporters who otherwise wouldn’t have voted would not change the outcome.

The Schultz Question, then, becomes a lot hazier and far less of a mortal prophecy for Democrats. Should the former CEO run but never catch on, his vote total will be insufficient to make any difference. Should he perform in the ballpark of Ross Perot in 1992, he could absolutely play a spoiler role — we just have no idea as to the identity of the spoilee. It is perfectly plausible that a sizable number of Trump’s supporters in 2016, while averse to voting for the Democratic nominee, now find Trump sufficiently distasteful to vote for a different businessman — even if he is a lifelong Democrat, so long as it doesn’t say so on the ballot.

Some voters are hyper-educated on the candidates, some are faithfully devoted to a party, some check in around Nov. 1, and a few vote for Jesus as a write-in. Those who didn’t vote for the Republican or Democratic candidate likely did so for a reason, and a fair portion were probably aware that their candidate of choice would not win. That’s a lot of “probablies” and as many synonyms as I could locate. Enough that, seeing as Schultz is perfectly entitled to run if he wants, given that he was born in the United States and over the age of 35, those who’d prefer Trump to be a one-term president might be advised to take a breath and see his possible candidacy as an opportunity. 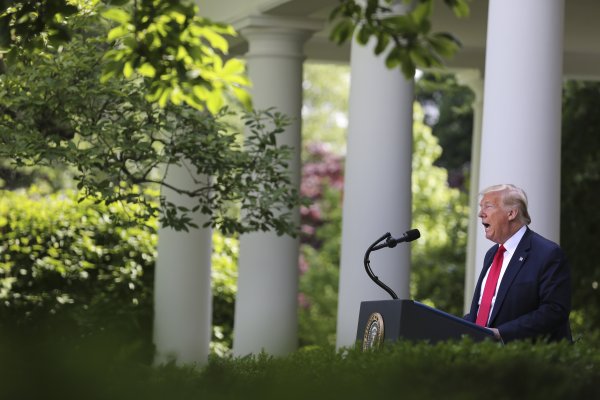