A University of Iowa student was found apparently frozen to death on campus as wind chills hit minus-51 degrees Fahrenheit – one of at least eight people to die as a result of the record-setting cold that had settled on the Midwest this week.

Authorities said the body of Gerald Belz, 18, was found by campus police just before 3 a.m. Wednesday behind an academic building. The pre-med student was taken to a hospital, where he was pronounced dead. Officials believe his death was related to dangerously low temperatures, though they are yet to give a specific cause of death.

Doctors did not find alcohol in his system. No foul play was suspected, police said.

According to the National Weather Service, temperatures in Iowa City dropped to minus-21 degrees late Tuesday and early Wednesday – with a wind-chill as low as minus-51 degrees.

Michael Belz, Gerald’s father, told KCRG his son was a “quiet, tough guy.” He was a semester ahead at the University of Iowa due to extra college courses. “He was a good kid,” Belz said.

In a tweet, Belz’s old high school principal paid tribute, as well as offering counseling services to any distressed students.

On Tuesday, a 55-year-old man was found dead outside a garage in Milwaukee, having collapsed after shoveling snow; an 82-year-old in Pekin, Ill., died from hypothermia outside his home on the same day. A 75-year-old man was killed when he was struck by a snow plough near Chicago on Monday, and in northern Indiana, a young couple died after a their car was hit while driving on icy roads. Two others have died in Michigan.

It is not the first time the severe cold has claimed a life on the University of Iowa campus. Last January, Paul J. Biagas, 24, was found dead in the snow outside the Robert A. Lee Recreation Center. At the time, the temperature in Iowa City was around 5 degrees, with a wind chill of minus-10 degrees. 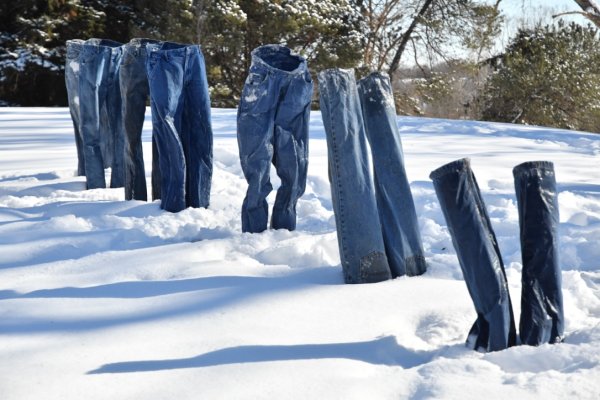 About 100 Frozen Pants Invade Minneapolis Neighborhood
Next Up: Editor's Pick