It’s like something straight out of a classic heist film. Florida public works employees called to investigate an apparent sinkhole were shocked to discover a recently excavated tunnel running below the street in the direction of a nearby bank. It remains unclear how many people were involved in digging the tunnel, reported to be 50 feet long.

Peering into the hole, a power cord was spotted running toward a wooded area. Pembroke Pines police officers went to the nearby wood line where they noticed the entrance to a narrow tunnel. The FBI were subsequently alerted.

“They’re heading towards the ATM. I don’t think they were doing that for any other reason,” FBI Miami Special Agent Michael D. Leverock told reporters. “[The tunnel’s] approximately 2-foot, maybe 3-foot in diameter. It’s very small, it’s very claustrophobic,” he added. “You would not be afraid of small places for sure if you were doing this.”

When police eventually ventured inside they found a pair of muddy boots, a ladder and stool, digging tools and a small Honda generator. “These people were using pickaxes and a small little wagon,” Leverock said. “I would like to say I saw something like this in the movies, however, this hole is so small that … it’s unique”.

Local police reportedly used a remote control rover to explore the tunnel; public works employees were digging in the wooded area where they believe the tunnel may lead out to.

Pembroke Pines Department of Public Works referred questions to the FBI, who later released photos of the materials used, including the generator, hoping the public could help track whoever was behind the elaborate plan. “So, if somebody’s been bragging about this, somebody’s seen this wagon, seen a generator and some folks who are talking about a tunnel, certainly give us a call,” Leverock said. No arrests have been made. 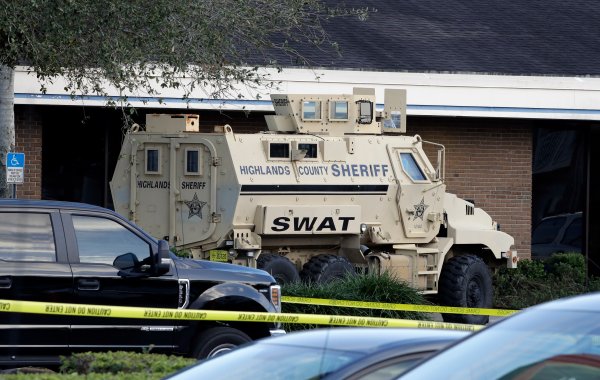 These Are the 5 Women Killed in the Florida Bank Shooting
Next Up: Editor's Pick