Cherubic Cupid Is Everywhere on Valentine’s Day. Here’s Why That Famous Embodiment of Desire Is a Child

Every year on Feb. 14, Valentine’s Day is marked by shades of pink, flowers, chocolates, romantic movies and wine — and images of a magical baby boy who flies around shooting arrows at people.

But despite his infant form, that baby, widely known these days as Cupid, began his mythological life as a man who had more power than any god.

“In the [Greek] literary sources we have, he’s depicted as just unconquerable,” Richard Martin, a classics professor at Stanford University, tells TIME. “So, whatever he wants to happen, happens — and he causes disaster.”

The original Cupid was more of a heartthrob than a cherub. Traced back to 700 BC, this character of legend was called Eros, Martin explains: the Greek word for desire. In the Archaic period, Eros — the son of Aphrodite, the goddess of love — would play with the hearts of mortals and gods to cause mayhem. Depicted as a young man in his late teens, he was considered both handsome and threatening, as he would use his power to make people fall in love.

Statue of Eros, 2nd century. Roman, after a Greek original of the first half of the 4th century BC. Found in the collection of The Hermitage, St Petersburg.
Print Collector/Getty Images

In a choral ode from Sophocles’ Antigone, circa 440 BCE, Eros’ power is described as almost sinister:

In Hippolytus, a 5th century BCE play by Euripides, the frightening notion that Eros could force the wrong people into love is highlighted. “I pray that love may never come to me / With murderous intent, in rhythms measureless and wild,” the ancient playwright wrote. (“Love” translates to Eros in Greek passages about the god.)

This is pretty far off from the modern depiction of this god as a playful little boy. “It’s more like he causes you to fall in love, and that can lead to tragedy,” Martin says of Eros — a “cosmic force for bringing things together.”

But something strange happened around the 4th century BCE.

People were intimidated by this sexually powerful, controlling man, who could strike people into loving one other. But social status of women in Athens — the central city of Greek literature — was falling drastically. Increasingly, Eros’ stories were linked to stories about his mother, Aphrodite. If a woman controlled his every move, Martin speculates, then mortals had no reason to fear him. Eros was suddenly not so powerful anymore: He would act only on his mother’s wishes.

“The way to sort of constrain, constrict and defuse Eros is to keep infantilizing him. He’s under control, only the son of Aphrodite,” Martin says. Based on his mother’s wishes rather than his own chaotic impulses, he would use his powers to create relationships between people.

When the Roman era began, because Greeks were seen as culturally sophisticated, much of this Greek mythology was adopted by the new ruling classes. And when the Romans conscripted the Eros mythology, they chose to bring over the more recent iteration of the god as a cute little kid. They named him Cupid, a synonym for Eros that also translates to “desire.” (His mother was likewise Venus, the Roman version of the Greek Aphrodite.)

For the Romans, the character of Cupid was always a cherubic little boy who followed his mother’s wishes to make people fall in love.

It wasn’t just the Romans who became obsessed with the Greek portrayal of Cupid. Centuries later, Renaissance painters took up this imagery and depicted the Cupid figure as a child. This is seen in 1602 with Caravaggio’s Cupid, which showed a young, nude boy with wings and a bow.

Valentine’s Day was already becoming popular in the 18th century, and by the turn of the 19th century, Cupid had become linked to the holiday for his love-creating abilities. It’s no surprise that when greeting-card manufacturers made products for the holiday, they included imagery of Cupid that was inspired by beloved Renaissance art, Samantha Bradbeer, the historian for Hallmark Cards, Inc., explains. “Those 19th century greeting card publishers were simply following suit with what was on trend,” Bradbeer tells TIME.

The industry really hit its stride in the 1850s after Congress voted to decrease postage rates in an effort to circumvent the privatization of the postal service. This postal reform made it possible for everyday Americans to send and receive mail—while the Industrial Revolution brought the advent of printing press technology.

So when Hallmark began manufacturing Valentine’s Day cards in 1916, this mass production meant sending postcards was much cheaper and easier. As Valentine’s Day became more convenient, Cupid imagery only continued to grow.

Valentine’s Day has remained one of Hallmark’s two biggest holidays, along with Christmas, since the company’s founding as a postcard company in 1910. In fact, industry-wide, around 145 million Valentine’s Day cards are sent annually—not including children’s classroom cards, Bradbeer says.

It may seem strange, still, that we would collectively associate a baby with a bow and arrow as a symbol of this extraordinarily popular holiday. But it’s actually quite simple. Though Roman and Greek traditions left us with this partly mischievous, partly powerful Cupid, he serves a different purpose in modern culture, Bradbeer believes. The Greek conception of Eros as a god who used his power for ill is not what Cupid stands for today.

“Sometimes, people need a little bit of a push to make that first move — to better express themselves,” she says. “I think sometimes having Cupid depicted on the card behind a couple, [he is] kind of pushing them together to do just that: to express their love, their friendship.” 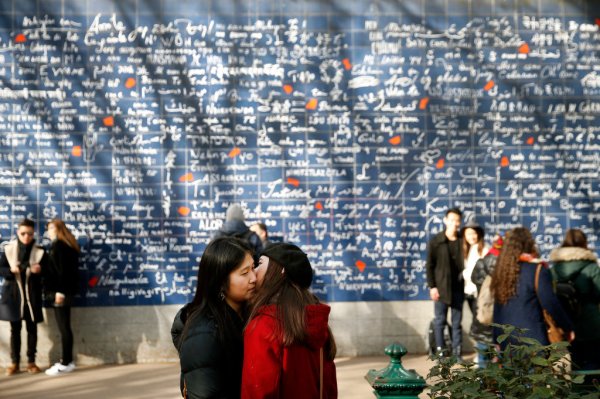 From Mass Weddings to Spilled Wine: How 6 Countries Around the World Celebrate Valentine's Day
Next Up: Editor's Pick