'We're Getting Soft.' Kentucky Governor Criticizes Closing Schools When Temperatures Could Feel As Cold As -25 Degrees

Kentucky Gov. Matt Bevin said school closures due to freezing temperatures caused by a deadly polar vortex were a sign that “we’re getting soft.”

Fayette County and Jefferson County public schools in Lexington, Ky., closed all schools on Wednesday and cancelled all activities “because of the dangerously cold temperatures and wind chill.” Other school districts and many colleges also closed on Wednesday, when temperatures were expected to hover between a high of 11 degrees and a low of 4 degrees.

In a radio interview with 840 WHAS on Tuesday, Bevin objected to that decision.

“It’s better to err on the side of being safe, and I’m being only slightly facetious,” Bevin said. “But it does concern me a little bit that in America, on this and any number of other fronts, we’re sending messages to our young people that if life is hard, you can curl up in the fetal position somewhere in a warm place and just wait until it stops being hard, and that just isn’t reality. It just isn’t.”

The National Weather Service issued a wind chill advisory for parts of Kentucky on Wednesday, warning that wind chills as low as minus 25 degrees could cause frostbite in just 30 minutes and that minor snowfall would cause “slick road conditions across parts of central Kentucky.”

The Kentucky Education Association, which faced off against Bevin last year when teachers walked out over the state pension system, voiced support for decisions to cancel school.

“Kids have to sit on bus stops and or walk a mile or more in that,” Doug Stafford, Republican chief strategist for Kentucky Sen. Rand Paul tweeted. “No one wants to hear your old man stories about walking uphill both ways in that when you were a kid.”

Bevin, who is up for reelection this year, was also quickly criticized by his gubernatorial opponents.

“I wish there were better words to describe the things our governor says than ‘dumb and mean’. But there aren’t,” Democratic candidate Adam Edelen tweeted.

“Protecting our children from freezing temperatures with subzero windchills is not something to be cavalier about, and it is not funny,” said Republican candidate Robert Goforth in a Facebook post. “Some of our precious kids don’t have adequate coats and other items to safeguard them from this dangerous weather.” 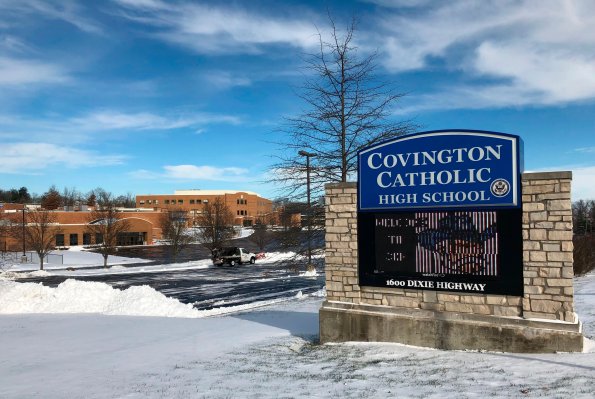 Native American Veteran on Whether High School Student Should Have Apologized in TV Interview
Next Up: Editor's Pick