A Congolese child is seen at a makeshift orphanage that houses children abandoned or separated from their families, in Beni, Democratic Republic of the Congo, on Feb. 6, 2018.
John Wessels— AFP/Getty Images
By Casey Quackenbush

Belgian officials have requested DNA samples from children adopted from the Democratic Republic of Congo to determine if they were falsely declared orphans and kidnapped, BBC reports.

The adoptive parents of around 15 children have been contacted, according to officials.

Prosecutors suspect the biological parents thought their kids were going to a holiday camp, not to an orphanage that has since been shuttered.

“There are only losers in this story and the judge will have to determine where the best interests of the kids lie,” Flemish MP Lorin Parys told the BBC.

While Congo has among the highest rates of orphaned kids, it stopped issuing exit permits for adoptions in 2013 amid trafficking concerns, according to BBC. Cases underway at the time were still processed.

Belgian authorities began investigating child-smuggling from the central African nation in 2017 when a report revealed four adopted children had falsely been declared orphans. Belgian journalists traced the cases back to biological parents who said their children never returned from what was billed as a youth camp. The kids, who were between the ages of two and four at the time, were instead taken to the Tumaini orphanage.

After the 2017 report, Belgian officials looked into all the country’s adoptions from the Tumaini orphanage. The 15 cases involved children who arrived between 2013 and 2015, and whose biological parents are believed to still be alive, BBC reports.

“They are different age ranges but the kids who’ve been here the shortest time have been here three and a half years, so they have all been integrated,” said Parys. “The parents here have done nothing wrong and of course the parents in Congo are devastated that they lost their kids under false pretenses.” 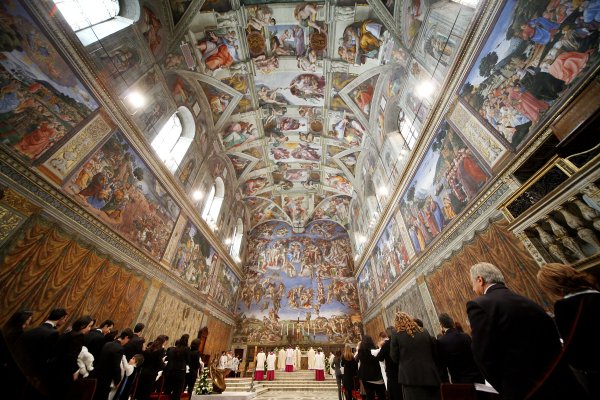 'Lost Michelangelo' Painting Missing From Church in Belgium
Next Up: Editor's Pick