India's Main Opposition Party Is Promising a Basic Income for the Poor. Can It Work?

On Monday, the man leading India’s main opposition announced that his party would guarantee every poor person in India a minimum income if it wins elections scheduled for this spring.

Rahul Gandhi’s surprise promise was welcomed by supporters of Universal Basic Income (UBI), a radical policy proposal that has been gaining ground in recent years. Under UBI, a government gives a fixed amount of cash, without strings attached, to every person in society.

“We cannot build a new India while millions of our brothers and sisters suffer the scourge of poverty,” said Gandhi, the leader of India’s Congress Party. “If voted to power in 2019, the Congress is committed to a Minimum Income Guarantee for every poor person, to help eradicate poverty & hunger.” (It is unclear whether Gandhi is proposing an unconditional basic income.)

Prime Minister Narendra Modi’s ruling Bharatiya Janata Party (BJP) immediately dismissed Gandhi’s proposal. “Where will the money come from?,” a spokesperson asked Reuters. “He’s promising the moon to fool the people.” Nevertheless, speculation is swirling in political circles that the BJP is poised to make a similar announcement soon. The ministry of finance came out in support of a basic income in India’s 2017 economic survey, and many speculate that the Modi government’s final pre-election budget (scheduled for Feb. 1) could include a basic income. When contacted by TIME, the BJP’s economic affairs spokesman refused to rule out the possibility.

“I happen to know that the BJP leadership were very seriously considering [supporting a basic income],” says Guy Standing, an economist and early advocate of UBI who worked with Indian politicians and the U.N. to set up trials in the Indian state of Madhya Pradesh in 2011-2012, in which more than 6,000 people were given a basic income.

If the BJP do announce their support, “you’ll hear a champagne cork pop here,” Standing says. Effectively, he says, that would have the surprise effect of making a basic income the official policy of the next Indian government. Globally, that would mark a significant leap for UBI, which has never been implemented at a national level. The policy has been dismissed as fantastical by many right-wing governments, and only approached tentatively in the U.S. by left-wing politicians like Bernie Sanders.

The trials in the state of Madhya Pradesh are often referenced by advocates of UBI as evidence the scheme can alleviate poverty more efficiently than means-tested welfare schemes. “We know as a result of our pilots that it works,” Standing says. “We know it improves nutrition, health, school attendance, women’s status, status of the disabled, economic output. But to get the politicians to do it is an incredible leap. I’m obviously excited by the development.”

A caveat to his excitement is that Gandhi’s proposal (of which details are scarce) is not likely to be the kind of pure “universal” basic income that Standing advocates, in which money is given to every single person in an economy, no matter how poor or rich. In Gandhi’s speech on Monday, he promised a basic income to “every poor person,” suggesting that some form of means-testing would be included. “Now, our job is to persuade them to make it more universal,” Standing says. “You’re going to spend far more identifying the rich than by just giving it to everybody and taxing it back from the wealthy in some way.”

For Ashwini Deshpande, a leading Indian economist based at Ashoka University, questions remain about where the money will come from to fund such a program. She says current welfare schemes amount to between 5 and 10% of India’s GDP, and that a basic income would cost a similar amount, according to current estimates.

“It is not possible to have UBI in India with the existing system of taxation and the existing welfare schemes intact,” she tells TIME. “It would definitely mean the reallocation of existing subsidies, and I think it will also require raising more resources through taxation.” If it does mean raising taxes, Deshpande says, Congress has not been open with voters about that. Under current prime minister Modi, Indians have enjoyed some modest tax cuts, at the same time as the amount of tax income received by the government has gone up thanks to a crackdown on tax avoidance.

More importantly, Deshpande says, Gandhi’s surprise announcement means that there has not been enough public discussion about the pros and cons of dismantling the current welfare structure and replacing it with a basic income. “If it’s going to be that every other scheme gets stopped, is that a good idea right now? We need to discuss that.”

An answer to that question depends on whether India’s current welfare system is fit for purpose. According to Standing, it isn’t. The patchwork of state subsidies that make up the welfare system, he says, is often inefficient. “Most of those subsidies are regressive,” he says. “In other words, they go predominantly to middle or upper income groups. They don’t contribute to growth.” In Transparency International’s 2018 corruption index, released on Tuesday, India was ranked 78th out of 180 countries in the world. With a basic income, Standing says, “You can cut out the corrupt middleman who is a notorious feature of Indian political and social life.”

Both Standing and Deshpande said Gandhi’s announcement took them by surprise. While the Congress Party, which ruled India for decades after independence, has always advocated economic development and poverty eradication, it has been roundly criticized for corruption scandals under its watch. Many of India’s welfare policies were implemented under Congress governments. That, Standing says, bred hostility in the party toward UBI advocates who planned to dismantle them.

“Initially the Congress were among the most hostile to what we were doing in India,” he says. But now, the party has come around. “It seems suddenly that Congress has realized that those schemes are not what they claimed, and a lot of people are aware of the corruption.”

One seismic change in Indian society, which advocates say has made a basic income more feasible, is the centralized identification system, called Aadhaar. The government is currently rolling Aadhaar out to all of India’s 1.3 billion citizens, but some have criticized it for undermining privacy and data security. The government says Aadhaar will help more Indians open up bank accounts — a necessity for receiving a basic income payment. Standing says that he knows the system has its drawbacks and doesn’t want to idealize it. Nevertheless, he says, it’s inevitable that ever more Indians will be brought into the networked world.

Whether universal basic income remains a fantasy hinges on what India’s governing party, the BJP, does next. Congress, after all, only holds 44 of the 545 seats in India’s lower house of parliament. If the rumors are true and the BJP has been planning to announce a similar policy in its budget, then there will be a broad consensus on basic income ahead of the election, which must be held before May. But even if that doesn’t happen, says Standing, Gandhi’s speech on Monday was a significant step. “The important thing,” he says, “is that the rhetoric has changed.” 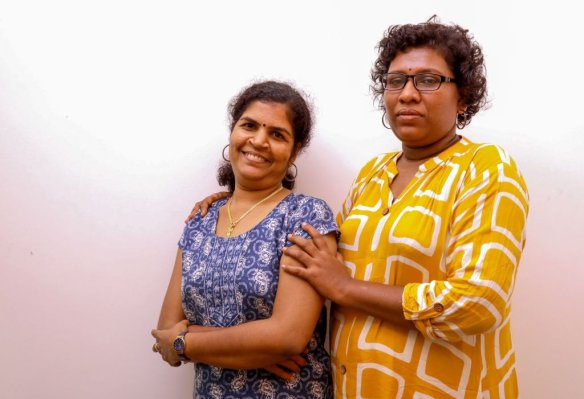 Indian Woman Who Entered Forbidden Temple Says Her Family Assaulted and Disowned Her When She Returned Home
Next Up: Editor's Pick