Then-White House lawyer Ty Cobb once told Reuters that Special Counsel Robert Mueller’s investigation would be wrapping up within a few months. That was in mid-August of 2017 — more than 17 months ago.

Cobb no longer works at the White House, but his optimism lives on among Trump associates. Throughout 2017 and 2018, Cobb and Trump attorney Rudy Giuliani repeatedly claimed that the Mueller probe was nearing an end. Acting Attorney General Matthew Whitaker echoed the sentiment on Monday.

“The investigation is, I think, close to being completed,” Whitaker told reporters, saying that he had been “fully briefed” on the probe.

As in all the prior cases, the special counsel’s office declined to comment.

While few know what’s really going on inside Mueller’s office in Southwest Washington, there are outward signs that the two-year long investigation still has a ways to go, including recent indictments, potential charges that haven’t been brought yet and a looming fight with Congress that could further delay the release of a report.

The most recent big, public move by Mueller’s team came just days ago. On Jan. 25, the FBI arrested longtime Trump confidant Roger Stone in a criminal case brought by Mueller.

The seven-count indictment against Stone accuses him of lying to Congress about his involvement with Wikileaks, tampering with witnesses and obstructing a congressional investigation into the Trump campaign’s relationship with Russia. (Stone has pleaded not guilty.) In the course of the arrest, the New York Times reported that agents were “seen carting hard drives and other evidence from Mr. Stone’s apartment in Harlem, and his recording studio in South Florida was also raided.”

“Who knows what will be found on the electronic devices taken from Roger Stone?” says Peter Zeidenberg, a former federal prosecutor now at Arent Fox. “There could be leads from those search warrants. In short, I would not put much stock on Whitaker’s statement.”

Julian Sanchez, a fellow at the Cato Institute, elaborated on that same point in an op-ed for the New York Times. “If Mr. Mueller is indeed less interested in Mr. Stone than the potential evidence on his phones and computers, the conventional wisdom that the special counsel probe is wrapping up — and could issue a final report as soon as next month — seems awfully implausible,” Sanchez wrote. “Digital forensics takes time, and a single device could easily hold many thousands of messages to sift through. And if this really is the first time Mr. Mueller’s office is seeing the most sensitive communications from a key figure like Mr. Stone, it’s likely they’ll come away with new leads to follow and new questions to pose to other witnesses.”

There are also rumors of other indictments Mueller has yet to drop.

Jerome Corsi, a conspiracy theorist and conservative pundit who may have talked to Stone about Wikileaks during the campaign, said in November that he had refused a plea deal with Mueller on a single count of perjury. On Jan. 24, Corsi’s lawyer said Corsi is being investigated by a grand jury, CNN reports, but so far, Mueller hasn’t indicted Corsi.

A lawyer for Andrew Miller, a former employee of Stone’s who was subpoenaed by Mueller’s team last year to testify before a grand jury, told CNN on Jan. 28, “The special counsel has advised me the grand jury is still interested in Andrew Miller, and they consider the case still a live case,” indicating that the Justice Department may have plans to charge others. Radio personality Randy Credico, who was mentioned in Stone’s indictment (though not by name) and who Stone has said was his source of information on Wikileaks, testified before Mueller’s grand jury last year, but has not been indicted. He could be in legal jeopardy if he was, in fact, a link between Stone and Wikileaks founder Julian Assange.

There could also be some bombshell indictments brewing higher up in the president’s circle. Fox News legal analyst Andrew Napolitano said in December that the president’s son Donald Trump, Jr., “has told friends he expects to be indicted” by Mueller, The Hill reports. Trump Jr. could be exposed to the special counsel’s probe for his involvement in a June 2016 meeting in Trump Tower with a Russian lawyer offering dirt on Hillary Clinton.

“My thought was that there could be another indictment to tie things together,” says Richard Ben-Veniste, one of the lead prosecutors on the Watergate Special Prosecution Force, now at Mayer Brown. But of course, no one outside Mueller’s team can be sure what the special counsel is planning. “Or not,” Ben-Veniste adds.

Former federal prosecutor Renato Mariotti cautions that Whitaker’s statement shouldn’t be dismissed entirely, however. “It’s possible that Whitaker is just trying to calm Trump down, but I doubt he would have put himself out there like this if the investigation was far from completion,” he tweeted.

Once Mueller’s investigation really is finished, a new fight could emerge between the Justice Department and Congress, further delaying the impact of his report.

In his confirmation hearing on Jan. 15, attorney general nominee William Barr told the Senate Judiciary Committee that Mueller should be allowed to complete his investigation and said, “My objective and goal is to get as much of the information as I can to Congress and the public.” But in the same hearing, he acknowledged that the information shared with Congress could be limited by existing Justice Department regulations, especially if Mueller declines to prosecute the President. Under those regulations, when Mueller finishes his work, he will submit a confidential report to the attorney general. Then it will be up to the attorney general — likely Barr — to decide how much of that information to share with Congress and the public, and in what form.

“A Special Counsel is appointed only in very rare serious circumstances involving grave violations of public trust,” Blumenthal said in a statement. “The public has a right and need to know the facts of such betrayals of public trust. Our bipartisan bill makes it the default that the American people have access to the full story, putting in context any conclusions with findings and evidence.”

The battle lines have thus been drawn for a whole new controversy to emerge at the conclusion of Mueller’s investigation — one that could wind up in the courts — over who gets to see his findings.

When he said the investigation is nearly completed, Whitaker “was just trying to probably answer a question that most of America is looking at—when will this die down?” House Minority Leader Kevin McCarthy said Tuesday in response to a question from TIME. “It’s appropriate that the American public understand the timing, I think it’s appropriate that it winds down and finishes.” 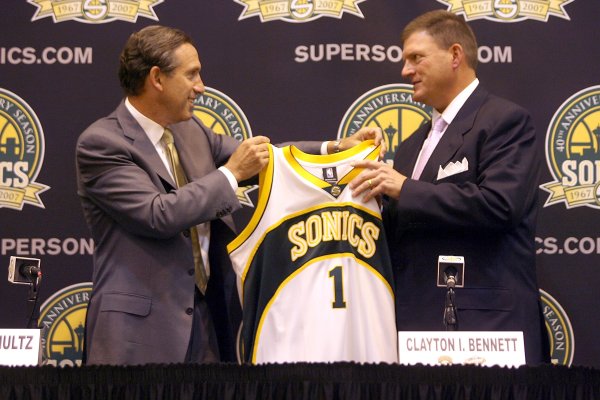 What Howard Schultz's Missteps As Seattle SuperSonics Owner Reveals About His Politics
Next Up: Editor's Pick