President Trump has been a longtime opponent of taking action on climate change, as evidenced by everything from his accusation that the phenomenon is a “hoax” created by China to his decision to pull the U.S. out of the Paris Agreement.

There are many reasons Trump may be against addressing climate change, but one thing is clear: he doesn’t understand the science behind it.

On Monday, the President took to Twitter to repeat a joke he frequently makes during winter weather events — this time the record-breaking, polar vortex-caused cold that’s sweeping the midwest this week — as a reason climate change cannot be real.

The problem with Trump’s analysis is that climate and weather are not the same thing.

Weather refers to the atmospheric conditions at a particular place and time. At this very moment, the weather in the midwest is freezing cold, with major snowstorms.

Climate refers to the long-term atmospheric patterns in a particular area. It may hit -20°F in the midwest this week, but over the long term, the average temperature is expected to rise, as is the frequency of days with extreme high temperatures. In fact, the National Climate Assessment, a landmark report released last year following a collaboration between more than a dozen federal agencies, shows that those trends are “higher for the Midwest than in any other region of the United States.”

Moreover, global warming is a worldwide phenomenon that refers to the spike in the Earth’s average surface temperature. That rise in temperature won’t necessarily be felt uniformly across the globe.

These distinctions help explain why many scientists and scientific organizations like NASA refer to “climate change” rather than “global warming.” The globe is certainly warming, but the phrase doesn’t fully reflect the changes caused by higher temperatures, which can result in more extreme weather events of many varieties during all seasons.

None of this should be news to Trump. Government scientists have recognized the threat posed by greenhouse gas emissions since at least the Lyndon B. Johnson administration. And during the Trump presidency, federal agencies have repeatedly reiterated the urgency of the threat, including with the National Climate Assessment. That report, which stretches more than 1,000 pages and includes work from more than 300 authors, shows that climate change is already affecting the U.S. and has implications for everything from agriculture to mental health. The effects of climate change “threaten the health and wellbeing of the American people” and “further disrupt many areas of life, exacerbating existing challenges and revealing new risks,” said David Easterling, a report author and scientist at the National Oceanic and Atmospheric Administration (NOAA), at the time of the report’s release.

And, if that report wasn’t enough, NOAA followed Trump’s tweet with a much simpler graphic Tuesday: 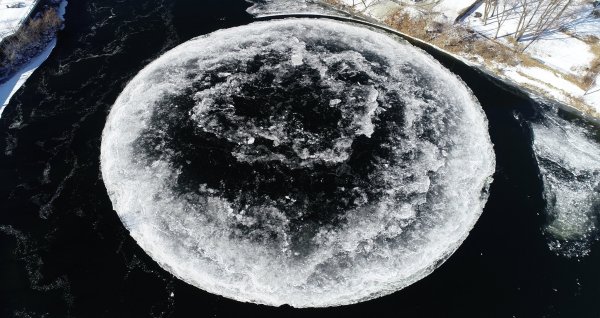 The Science Behind a Bizarre 'Ice Circle' in Maine
Next Up: Editor's Pick