Last March I traveled to Costa Rica to interview Howard Schultz about how climate change would affect the coffee industry. But the conversation kept veering off to his pet subjects of politics and policy.

In the midst of our discussion about global warming, the then-Starbucks executive chairman launched into a condemnation of the U.S. national debt and the “fiscal irresponsibility” of both parties. He called for hitting 4% GDP growth and a “centrist approach to try to address entitlements” like Social Security. He stressed that he was expressing his views as a private citizen, but clearly the prospect of running for higher office had already crossed his mind.

“There’s just been a lack of responsibility from both parties — and I think this is important, both parties,” he told me.

On Sunday, Schultz told “60 Minutes” that he is seriously considering running for president as an independent, and early indicators are that it’s these middle-of-the-road policies that would animate his campaign.

If so, that would put him at odds with contemporary politics. Donald Trump was elected president promising to build a wall along the Mexican border and drain the swamp of Washington influence. Democrats are now debating brash ideas like Medicare for All and a Green New Deal. And Schultz, a billionaire unencumbered by a party primary who can say what he wants, may run on fiscal responsibility. In 2019, that may be the boldest idea of them all: the audacity of thinking small.

In our conversation, the issue that seemed to animate him most was the national debt. “I don’t think you can talk about any of these issues that relate to the government’s responsibility without addressing the fact that the United States is $20 trillion in debt,” he said.

The national debt — alongside the country’s nearly trillion-dollar deficit — served as key talking points for Republicans not too long ago, but the issue fell by the wayside when Republicans enacted Trump’s sweeping tax cuts, causing the deficit to balloon. The issue would be familiar political territory — if a little dated — for a presidential candidate looking to build a campaign.

Schultz also stressed working across the aisle for solutions, a standard political bromide. “If you just got people in the room who left their ideology outside the room and recognized that we’re here to walk in the shoes of the American people we could solve these problems,” he said. “And we should.”

Even on climate change, the topic that brought me to Costa Rica, Schultz declined to advocate any bold solutions. He called for leadership with an “understanding that science is real” and said that the U.S. should remain in the Paris Agreement, but he declined to endorse a carbon tax or any other concrete domestic policy measure to deal with it.

And, at a time when the Democratic field has never been more diverse, Schultz distinguishes himself with a somewhat traditional — if exceptional in the scale of his success — backstory. He’s a wealthy white man with a compelling rags-to-riches story. Schultz grew up in public housing, was the first in his family to graduate college and then built the world’s biggest coffee empire. While running Starbucks he has given back by hiring veterans and funding affordable housing through his private family foundation.

“I grew up in public housing. I still carry that with me today,” he told me. “I’ve been blessed beyond anything I could imagine. It can only happen in America.”

All of this seems so normal and yet out of place given the current state of Washington politics. But being out of step seems to be the point of Schultz’s gambit. In 2016, voters elected an outsider with no political experience to shake things up. Maybe in 2020 they will take another radical step and elect a businessman with no political experience to restore things to normal. 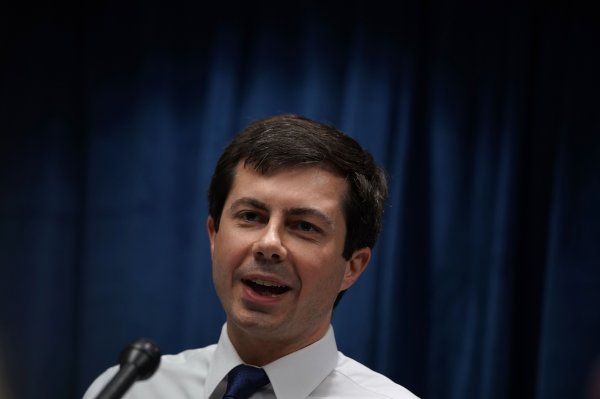 Why This Indiana Mayor Believes He Can Run for President
Next Up: Editor's Pick