(Bloomberg) — Secretary of State Michael Pompeo took the U.S. effort to recognize Juan Guaido as Venezuela’s rightful leader to the United Nations, part of a broader campaign to replace President Nicolas Maduro, and said the choice is between freedom and mayhem.

Pompeo’s comments came as the U.K. and the European Union pushed for new elections to be called within days in the embattled Latin American nation.

“Now it is time for every other nation to pick a side. No more delays, no more games. Either you stand with the forces of freedom, or you’re in league with Maduro and his mayhem,” Pompeo told the UN Security Council on Saturday during an emergency session called for by the U.S.

The top U.S. diplomat also rapped China and Russia for “propping up a failed regime in the hopes of recovering billions of dollars in ill-considered investments and assistance made over the years.” Russia pushed back, saying the U.S. was trying to engineer a coup in Caracas.

Venezuela’s competing leaders — Guaido heads the National Assembly while Maduro succeeded the late President Hugo Chavez in 2013 — are vying for support in the streets and the military. The U.S. is betting it has the clout to tip the scales after President Donald Trump’s decision to recognize Guaido as Venezuela’s interim president was joined by Canada, Argentina, Brazil, Colombia and Panama, among other countries.

The U.K. will recognize Guaido as “constitutional interim president if new elections are not announced within eight days,” Foreign Office Minister Alan Duncan told the council.

The European Union on Saturday also signaled it will recognize Guaido as the country’s leader if elections aren’t called within days.

Maduro has stood firm, winning the endorsement of key military leaders and vowing to defeat what he calls a U.S.-backed coup against his government. Nevertheless, he’s faced some setbacks, including massive demonstrations against his regime earlier this week.

Maduro’s efforts to withdraw $1.2 billion in gold from the Bank of England, a significant part of the nation’s $8 billion in foreign reserves, was blocked after U.S. officials lobbied their U.K. counterparts, Bloomberg News reported on Friday. The U.S. is instead seeking to steer Venezuela’s overseas assets to Guaido to help bolster his chances of effectively taking control of the government.

Saturday’s Security Council hearing was mostly a symbolic clash: with Venezuelan allies China and Russia holding veto power, there was little chance the UN body would agree on a resolution. But it will present moments of drama, with Pompeo expected to be seated at the same horseshoe-shaped table as Venezuelan Foreign Minister Jorge Arreaza.

Short of ramping up political and economic pressure, it’s unclear how the U.S. could force Maduro, who was re-elected in a 2018 vote widely seen as rigged, to step down. Venezuela’s top military officials took to the airwaves on Thursday to swear their support for the embattled president, and Russia and China have protested U.S. interference in the country’s domestic affairs.

Moscow has helped Maduro’s government through loans and weapons exports. China has been less overt in its warnings to the U.S., saying Venezuela’s independence should be protected. Beijing has provided more than $62 billion, mostly in loans, to Venezuela since 2007 and it’s paid back in cargo ships full of Venezuelan crude.

Vasily Nebenzya, Russia’s ambassador to the UN, said on Saturday that Washington and its allies were trying to engineer a coup in Venezuela.

“This is a gross abuse of the prerogatives of the members of the Security Council,” Nebenzya said. “The internal situation of this Latin American country should not be on the agenda.”

The Security Council debate underscores the wider geopolitical tussle that’s likely to block any coordinated international action to improve the lot of the South American nation, whose once prosperous, oil-rich economy has been wracked by widespread food and medicine shortages and hyperinflation.

“There are divergent visions of what the future should hold for Venezuela,” said Rosemary DiCarlo, UN undersecretary-general for political and peace building affairs. “We must do all we can to prevent a worsening of tensions.”

Since taking the helm of the legislature on Jan. 5, Guaido has aggressively pushed the military and the international community to recognize him as the rightful head of state. The U.S. has steadily expanded economic sanctions and denunciations of Maduro since Trump took office, all but urging that Venezuelans overturn their government. 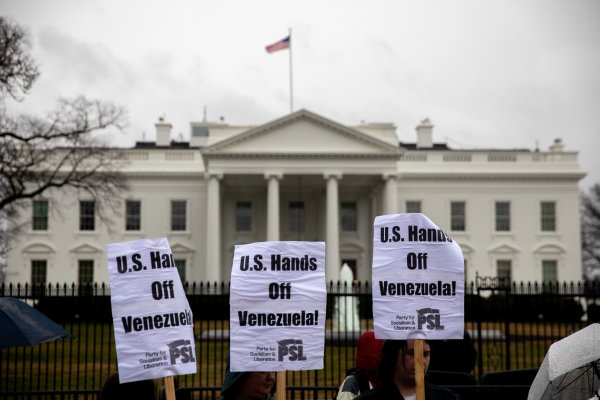 Why the Threat of U.S. Intervention in Venezuela Revives Historical Tensions in the Region
Next Up: Editor's Pick