The official theme of Black History Month 2019, “Black Migrations,” is a fitting one: not only is migration one of today’s most pressing political issues, but it’s also a key part of the annual observance’s own history.

Black History Month’s roots can be traced to the Great Migration of the early 20th century, during which millions of African Americans from the South moved to the northern cities hoping for better job opportunities. In 1918, Carter G. Woodson published his book A Century of Negro Migration, which argued that the Great Migration represented a “new phase of Negro American life which will doubtless prove to be the most significant event in our local history since the Civil War.” The book helped put Woodson on the map, and less than a decade later — as literacy rates were on the rise among black populations in those cities — he was instrumental in establishing Negro History Week, the predecessor to Black History Month.

With February approaching, TIME talked to Burnis R. Morris, author of the recently published Carter G. Woodson: History, The Black Press, and Public Relations and a Professor of Journalism and Mass Communications at Marshall University, about Woodson’s legacy.

TIME: How would you introduce Carter G. Woodson to someone who had never heard of his work?

MORRIS: I would call him one of the most significant educators of the 20th century. He’s often referred to as the “father of black history.” There was very little interest in black history before Carter G. Woodson. Many of the historians of the 19th century and early 20th century left African Americans out, and those who included them in their history books distorted facts and included many untruths. What people refer to as the modern black history movement was begun by Woodson in 1915 when he created the Association for the Study of Negro Life and History, which is now called the Association for the Study of African American Life and History.

African Americans, many of whom had never been allowed to read and write during slavery, had not been known for maintaining family records, so many people couldn’t produce documents to prove that they had made important contributions to society. Woodson set about to direct them, then he encouraged newspapers to write about significant African Americans. He believed racial discrimination would be lessened when whites and other races realized that African Americans also made contributions to the world. He believed there was only one history, but he had to settle for promoting black history until he could get blacks included in the other books. In his most famous book, The Mis-Education of the Negro [1933], he attacked the black middle class and educated black elite for adopting white values and attitudes, and he attacked black colleges. After slavery, most of the black colleges had white presidents, and they were slow to include black history in their curricula even after they got black presidents. Woodson caused a revolution in the teaching of black history on college campuses. There is a black studies department on most college campuses. You didn’t have those before Woodson.

How did he end up becoming a historian?

Woodson himself was heavily influenced by newspapers he read growing up, working in the West Virginia coal mines, where he would read newspapers to miners who were illiterate, and they gave him free food in return. Woodson’s father was one of a handful of former slaves who came to this area to complete the railroad. Carter taught himself the classics and sporadically attended school. He graduated high school [in 1896] and four years later returned as principal of that school. Then he got the equivalency of a two-year degree at Berea College and that same year [he graduated, in 1903]. [Between] hearing Booker T. Washington speak for the first time, and going to the Philippines — where he was a supervisor of a school program and discovered that the Filipinos were not being taught about themselves and their history much — he [realized] blacks he knew in America weren’t being taught [enough] about their [own people’s] achievements. This combination influenced him to get a bachelor’s degree and master’s degree [both in history] at the University of Chicago and apply to Harvard, where he became the second African American to receive a PhD at the university.

When did he get his big break?

In 1915, his first book The Education of the Negro Prior to 1861 got a favorable review in the New York Times, alongside a book by W.E.B. DuBois. Woodson went on a book tour. The Association and the journal The Journal of Negro History followed. Then in the 1920s, he was on a committee with his fraternity Omega Psi Phi talking about [ways to honor] blacks’ achievements, and that’s what led to the first national Negro History Week in 1926.

Were there any particular examples he liked to use, of African Americans whose achievements had been excluded from history books?

The poet Phillis Wheatley. The African-American almanac author, surveyor and mathematician Benjamin Banneker, whom Jefferson knew. He would talk about how the first real use of iron was contributed by Africans. He also highlighted the battles in which African Americans made important contributions, such as in the War of 1812.

Are there myths about Black History Month that you find yourself debunking?

You will hear black people say [white people] gave us the coldest and shortest month of the year for Negro History Week and Black History Month, as if there is a conspiracy to deprive African Americans of a full month. Woodson created it, and chose February because it had Abraham Lincoln’s and Frederick Douglass’ birthdays. There is no conspiracy about it. Some people use the month to protest, but Woodson didn’t want any protests during Negro History Week. He believed in protests and civil-rights [activism], but he wanted to keep commemorating the achievements of African American separate from agitation and the political side.

How did Negro History Week evolve into Black History Month?

It gathered some steam in the 1970s, around the 50th anniversary of Negro History Week. Gerald Ford was the first President to issue a national Black History Month proclamation, and every president since him has done that. Many of the younger civil rights activists [at the time] wanted to choose a name that African Americans chose themselves; they didn’t choose to be called Negroes. Black was more in vogue. I think Woodson would have resisted that name change. He didn’t think “Negro” was something to be embarrassed of. I had a student from Africa who was concerned we were using term African American because it left him out. The old term that Woodson and others used until the mid-’70s, Negro, embraced blacks from all countries in the world.

In your book you write that Black History Month has been “misappropriated and commercialized.” How so? How would Woodson want it to be commemorated?

Woodson railed against people taking advantage of Negro History Week, who used it to sell items and make money. John Hope Franklin — probably the most respected African American historian since Woodson, who was mentored by Woodson — said he did not accept speaking engagements during Black History Month because it was overly commercialized. The movie Black Panther, to some extent, exploited black history because you have people flocking to the theaters, watching this movie and believing they have made a significant contribution to black history by having this large company make money off them. We celebrate the fact that they grossed a billion dollars, but Woodson was not as interested in celebrities as he was ordinary people. He asked black newspapers to preserve their files and turned to members of his association to “write the life histories of the ‘near great’ but useful Negroes of whom editors and authors take no account.” We often don’t see that today. We see lots of [emphasis on] the first athlete to do this and that. That’s O.K., but you shouldn’t stop there. 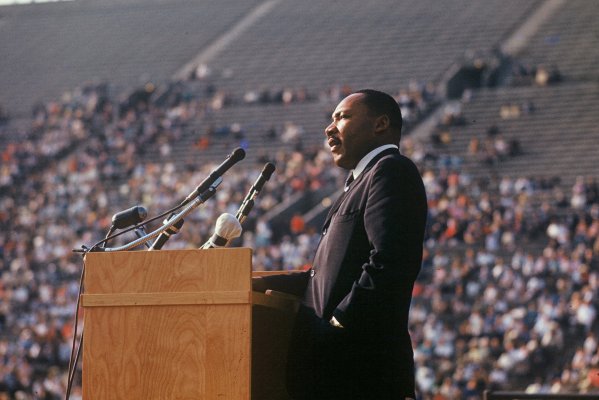 How These Never-Before-Published Photos of Martin Luther King Jr. Were Discovered Decades After They Were Taken
Next Up: Editor's Pick