The Shutdown Appears to Be Causing Major Air Travel Delays. They Could Get Far Worse

Several major U.S. airports, including LaGuardia Airport, Newark Liberty International Airport and Philadelphia International Airport, are experiencing significant delays Friday morning due to air traffic controller staffing issues. The delays are expected to range from 30 minutes to about an hour, according to an official site that lists major flight delay information.

It’s unclear if the staffing issues are directly related to the ongoing partial government shutdown, during which air traffic controllers are working without pay. However, Friday marked the second missed paycheck in a row for federal employees, including controllers, who work for the Federal Aviation Administration (FAA). Air traffic controllers who spoke with TIME said they believed the staffing problems are related to the shutdown, and that the problem could worsen.

“We are starting to see the breakdown of the system as a result of the shutdown,” said one air traffic controller, who was not authorized to speak to the media.

“It’s obvious that it’s related to the shutdown,” says Bob Ocon, a 63-year-old traffic management support specialist and former air traffic controller from Wading River, New York. “For the first time in a long time, I’ve seen the FAA publicly say that, what we call traffic management programs, delay programs — that’s basically how we control traffic, by delaying and regulating the flow — it’s the first time I’ve ever saw them publicly say that’s due to staffing.”

Ocon, who is considered non-essential and has not been working during the shutdown himself, added that despite their lack of pay, many controllers are working overtime hours, taking away time they might otherwise use to find alternative income and worsening the relative pain of a missed paycheck. Control towers and centers were understaffed before the shutdown, he said, and the shutdown is only making matters worse.

Some air travelers said on Twitter Friday morning that pilots had informed them the delays are shutdown related. Friday’s weather may be further complicating matters.

As of Friday morning, the staffing issues are occurring at the Washington ARTCC (Air Route Traffic Control Center) and at the Jacksonville Air Route Traffic Control Center, both of which are facilities that control aircraft while they’re flying at high altitudes between airports. Because of the highly interconnected nature of the national airspace system, staffing issues and other problems in one geographic area can have consequences for far-flung airports and other facilities.

If they are related to the shutdown, Friday’s delays could be the first of a painful period for travelers. Air traffic controllers who spoke with TIME on Thursday said that, if controllers are forced out of the job by the lack of pay due to the shutdown, it could cause massive air travel delays. Controllers prioritize safety, they said, and can only handle so much traffic at one time. If fewer controllers show up to work, the controllers who are working may be forced to delay departures and arrivals in order to decrease the amount of traffic they’re managing at a single time, causing delays.

The White House says President Donald Trump has briefed on airport delays amid the extended partial government shutdown. “We are in regular contact with officials at the Department of Transportation and the FAA,” she said in a statement, according to the Associated Press.

Some politicians are already using Friday’s air travel issues as a shutdown talking point. While it’s legally possible for Congress to pass a bill that would pay controllers, it’s more likely that politicians will use travel delays as a bargaining chip in the ongoing battle over reopening the government. “The #TrumpShutdown has already pushed hundreds of thousands of Americans to the breaking point,” tweeted House Speaker Nancy Pelosi. “Now it’s pushing our airspace to the breaking point too.”

Other air travel-related workers, including TSA officers, are also experiencing higher than normal rates of “sickouts” during the shutdown. 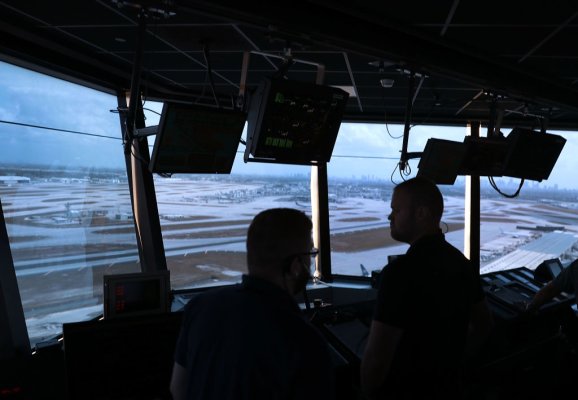 'We're All Human.' Air Traffic Controllers Are Missing Another Paycheck, and It's Taking a Toll
Next Up: Editor's Pick