When Roger Stone was arrested on Friday morning on charges connected to Robert Mueller’s Russia investigation, the news came in the wake of long speculation. Reports emerged months ago that Stone’s finances and associates were the subject of investigation by the Special Counsel’s team. In May of last year, he even solicited funds for his legal defense.

But the story of how Roger Stone got to this point takes place over decades, not months.

Stone’s history with Trump is a long one, and his Trump boosterism was in keeping with a political career going back nearly half a century. Though he had volunteered for the 1964 Barry Goldwater campaign, it was Richard Nixon’s reelection campaign that launched his career. And he is no stranger to questions about his involvement in possible political wrongdoing, his actions having been examined by the Senate Watergate Committee.

Stone first appeared in headlines in 1972 when, as an up-and-comer in young Republican circles, he was named as the Nixon campaign contact of a man called Michael W. McMinoway, who was caught going undercover within the campaigns of Nixon’s Democratic challengers. McMinoway had served as a security guard near McGovern’s headquarters during the Democratic National Convention and passed along what he heard to Nixon’s team; he was also identified as having infiltrated Hubert Humphrey’s and Edmund Muskie’s campaigns, too. A New York Times investigation that summer revealed that McMinoway was just one small part of a much larger sabotage plot — and that Stone’s involvement in that plot went deeper too.

For example, an official told the Times that, during the primary season, Stone was sent to New Hampshire to make a donation to a Nixon challenger in the name of the Gay Liberation Front and forward a receipt for the donation to a Manchester, N.H., newspaper publisher. (Stone, apparently wary of announcing he was there on behalf of a gay organization, decided to make the donation in the name of the Young Socialist Alliance.) Stone also suggested to the Committee to Re-elect the President that they hire a young man he knew to infiltrate “radical” organizations.

He would later acknowledge his part in the Nixon campaign “dirty tricks,” adding that he was just 19 when he made that New Hampshire donation, and under orders from his boss to do something that was not technically illegal — though he has objected to being described as a “bagman” who “kept his mouth shut.”

Even after Watergate, Stone was vocal about his admiration for Nixon, about whom he has written books and whose face he has tattooed on his back.

“My admiration of [Nixon] has to do with his resilience. The tattoo is a daily reminder that in life, when you get knocked down, when things don’t go your way, when you’re defeated, you got to get up and fight again,” he said in 2017.

After Nixon’s resignation, Stone continued to have a hand in Republican campaigns, from both the inside and outside. For example, he served in Ronald Reagan’s 1980 and 1984 campaigns. By 1986, when TIME ran a cover story about lobbying, the twin lobbying/political-consulting firms he ran with Paul Manafort, Republican strategist Charles Black, former DNC finance chair Peter Kelly and Lee Atwater (of Willie Horton ad infamy) was hailed as “the Slickest Shop in Town.”

“Stone, who practices the hardball politics he first learned as an aide to convicted Watergate Co-Conspirator Charles Colson, fancies $400 suits and lawn parties,” the story noted. “With his heavy-lidded eyes and frosty demeanor, he openly derides Atwater’s client, Vice President Bush, as a ‘weenie.’” At the time, Stone was working for Bush rival Jack Kemp.

Stone played a role as a consultant in the 1992 race, and in 1996 made headlines when he was nixed from his role for the Bob Dole campaign. Though the campaign downplayed his role after his departure, TIME reported that he was “responsible for opposition research and ‘bracketing,’ which is the practice of sending spokesmen and hecklers wherever Clinton is headed.”

After that, bounced from the Establishment campaign, Stone seemed to turn his focus to what was then the fringe. As he told the Washington Post in 1986, he always saw himself as an outsider, a man who preferred taking risks to getting into any club. And one risk in particular had caught his eye: Donald Trump.

In 1999, TIME looked at how figures outside the usual political party framework—including Jesse Ventura, Ross Perot and yes, Donald Trump — were eying the White House. (At the time, mainstream Republicans welcomed Trump to the fray, on the idea that were he to run as a third-party candidate the votes he would vacuum up would mostly come from the left.) Central in helping Trump make the decision was Roger Stone:

By the time Fortune profiled Trump the following year, during the same election cycle, Roger Stone was his political adviser. “There’s a John F. Kennedy-type charisma that’s very hard to put your finger on,” Stone said of Trump. “He’s probably the best speaker on the circuit.” The duo would have an on-again-off-again political relationship in the election cycles that followed, but their link clearly runs deep.

Even so, Stone would acknowledge, it wasn’t his own intuition or experience that first led him to Trump.

“The first person to imagine a Trump presidency was not me but was former President Richard Nixon,” he told C-SPAN in 2017. As he related, he was doing some post-White House work for Nixon in the mid-1980s, when Nixon happened to meet Trump at Yankee Stadium. “[Nixon] called me the next day and he said, ‘Well, I met your man. I’ve got to tell you, he’s got it. He could really go all the way.'” 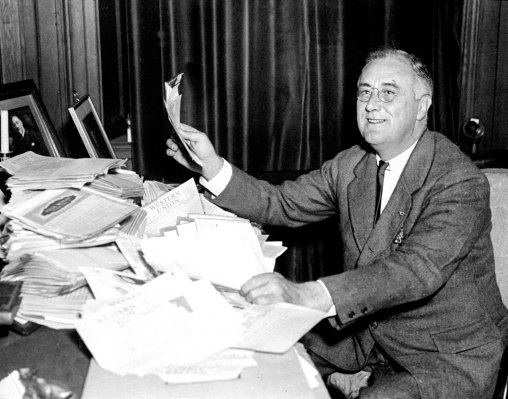 President Trump’s Approval Rating Is at a Near-Record Low. Here’s What to Know About the History of Those Numbers
Next Up: Editor's Pick