The gorgeous gowns at Valentino‘s spring 2019 couture show were a testament to the vision of the house’s creative director Pierpaolo Piccioli, but it was the casting and manifestation of the show that brought many attendees to tears, including ultimate diva, Céline Dion.

The show — which featured magnificent floral prints, colors, ruffles galore, sweeping trains, and feather-embellished eyelashes — was an endeavor to modernize couture, something that was summed up nicely in the imagery that Piccioli referenced ahead of the show. According to WWD, Piccioli was inspired to question what couture should look like while looking at the iconic 1948 Cecil Beaton photo of a group of women, all of whom are white, in Charles James dresses.

“The beautiful pictures of couture from the beginning, you only see one kind of woman — white WASPs,” Piccioli said. “You never see a strong black woman….It’s about embracing that idea of uniqueness, which is couture.”

In the show, Piccioli featured his modern take on couture on a show-stealing bevy of models, whose diverse, majority people of color casting generated as much buzz as the clothes themselves. Of the models who walked in the show, Paper reports 39 of them were black women, including Adut Akech, Liya Kebede, and the one and only Naomi Campbell, who returned to Valentino’s runway for the first time in 14 years to close the show in a sheer black and dramatically ruffled gown.

While the show had no shortage of fans, it might have been Dion’s tearful response, reported by Vogue, that most epitomized the power this sartorial moment held for many.

“You have given women back their beauty,” she said.

See Campbell’s return, Dion’s emotional moment and more from the show below. 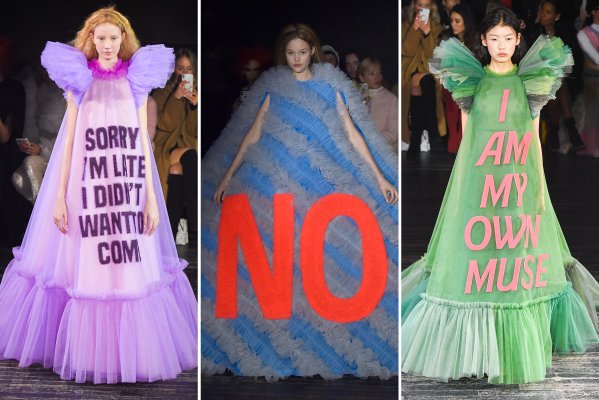 Say What You Need to Say With Viktor & Rolf's Cheeky Meme-Inspired Couture Collection
Next Up: Editor's Pick