The Senate's First Attempts to End the Shutdown Failed. No One Knows What Happens Next

As expected, both procedural votes that would have paved a path to ending the longest government shutdown in U.S. history failed Thursday.

The procedural vote on the proposal backed by President Donald Trump, which included $5.7 billion in funding for a border wall, received 50 votes in the Senate, with 47 opposing. The proposal backed by the Democrats, which would have temporarily opened the government until February 8 with no money for a wall, received 52 votes, with 44 Senators opposing. Both needed 60 votes in order to advance.

Both proposals were essentially dead on arrival. No lawmakers heading to the vote Wednesday expressed any confidence that either would receive the necessary votes.

In a bad sign for Trump, only one Democrat crossed party lines to vote on Trump’s proposal, while six Republicans did so for the Democrats’. After the votes, a small group of these senators took to the floor to push to reopen government for three weeks while negotiations continue. At the same time, Democratic leader Chuck Schumer was meeting with Senate Majority Leader Mitch McConnell.

It’s not obvious to members of Congress what comes next. “I have no idea,” Kentucky Rep. John Yarmuth, who chairs the House budget committee, said on Wednesday when asked about a possible path forward after these votes. “Has anyone come up with one?”

The failed votes happened on the 34th day of the partial government shutdown, and the same week that thousands of federal workers would miss their second paycheck. But while both sides of the aisle, at least in Congress, acknowledge that a compromise must be reached, they seem unclear about how to get there, although different groups in both chambers are crafting various options, or at least putting forward different ideas. Democrats in the House of Representatives have been working on their own terms of negotiations for border security, which they are expected to officially unveil on Friday.

“We want to make slear to the American people what we support in eventual negotiations on border security, after the government is re-opened,” one Democratic aide told TIME.

The Democrats’ proposal, however, is not expected to include any money for a physical wall along the U.S.-Mexico border, a sticking point for Trump, since the wall is the reason he decided to shut down the government in the first place. Republicans in Congress are similarly adamant that there be some sort of physical structure. “I don’t believe anyone in America thinks you can have border security without some form of a barrier,” said House Minority Leader Kevin McCarthy.

In the Senate, a group of bipartisan Senators have been meeting regularly to plot a legislative compromise. “[We] have been meeting many many times,” said Maine Sen. Susan Collins, who voted for both proposals.

Republican Sen. John Cornyn said the only way out of this impasse was to “keep talking.” But that has not been happening. Democratic leadership has not met with the President since Jan. 9, when he stormed out. And despite the movement in both chambers, no imminent meetings have been scheduled yet.

Republican leadership has griped that Democrats are unwilling to come to the table. But Pelosi implied Thursday that, since Trump is ultimately the one who would sign the legislation re-opening the government, he has to facilitate the meeting. “It’s the President of the United States,” she said. “We would meet with him any time he wants to meet.”

Despite the growing frustration, there was the smallest inkling of optimism that these votes, the first the Senate has taken on the shutdown in nearly a month, were a tiny step towards progress. “I think it is time to be encouraged; I think we’re actually on the path to seeing a breakthrough,” said South Carolina Sen. Tim Scott. “The fact that we’re actually having votes … means we’re heading in the right direction.” 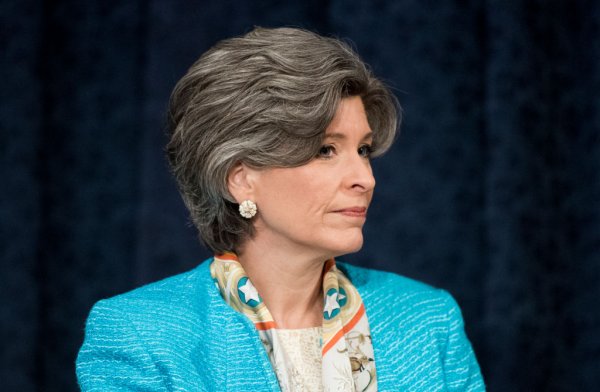 Iowa Sen. Joni Ernst Says She Was Raped in College and Physically Abused by Ex-Husband
Next Up: Editor's Pick