Why the Threat of U.S. Intervention in Venezuela Revives Historical Tensions in the Region

Standing on the balcony of his presidential palace on Wednesday, Venezuelan leader Nicolás Maduro warned his supporters about the U.S. response to their country’s political crisis. “We don’t want to go back to the gringo interventions of the 20th century,” he said. “The U.S. is trying to mount a coup and install a puppet government [to protect] its interests in Venezuela.”

As Maduro’s authoritarian regime has plunged Venezuela into humanitarian crisis, the socialist leader has often blamed the country’s troubles on economic sabotage by the U.S., evoking a long and bloody history of American imperialism in Latin America. But this week, as the U.S. publicly recognized opposition leader Juan Guaidó as interim president of Venezuela — and refused to rule out military intervention in the country — Maduro picked up the refrain with renewed fervor.

Now, tensions are rising between the U.S. and the embattled regime. Here’s the history behind Maduro’s claims, and how the current situation compares.

Why is Venezuela denouncing a U.S. coup?

The U.S. is among more than a dozen countries, including the U.K., Canada, and most of Venezuela’s neighbors, that have so far recognized the 35-year-old Guaidó as interim president. As leader of the country’s parliament, the National Assembly, Guaidó says he is constitutionally bound to take charge if there is no legitimate president in the country. (Maduro’s second term, won in rigged elections in 2108, is not recognized by the opposition.) Guaidó proclaimed himself president before crowds of supporters in Caracas at mass anti-government protests on Wednesday.

Soon after the White House released its statement statement recognizing Guaidó, Maduro announced he was breaking off ties with the U.S. and ordered all diplomats to leave within 72 hours. Secretary of State Mike Pompeo hit back, saying the Socialist leader had no “legal authority” to give that order, as “the former president.” Instead of withdrawing the mission, Pompeo pledged to give $20 million in humanitarian aid for Guaidó to hand out.

What is the history behind Maduro’s claim that he is a victim of U.S. imperialism?

Maduro says that by pushing for Guaidó to take over, the U.S. “intends to govern Venezuela from Washington.” And Washington certainly has a history of interfering in Latin America’s governments.

In the context of the Cold War, the U.S. viewed those developments down south as a threat to the global balance of power: American security forces did not want more of its neighbors to become allies of the U.S.S.R. They also wanted to protect American businesses and assets in the region, fearing that any new leftwing governments would follow the example of Cuba after its revolution and throw foreign powers out of the country.

To help stop any of that from happening, the U.S. used a range of interventionist methods. In the 1960s, State Department officials and CIA agents were intimately involved in training and assisting Guatemalan security forces, who killed thousands of civilians during a civil war with leftist rebels against the right-wing government. In the 1970s in Chile, the CIA attempted to thwart Allende’s ascent and later lent support to the General Augusto Pinochet, the right-wing military dictator who overthrew him. Pinochet’s regime murdered 3,065 of its citizens and committed human rights abuses against almost 40,000. In the 1980s in Nicaragua, the U.S. backed the right-wing Contra rebels to take on the socialist Sandinista government, leading to a decade of violent struggle.

In Venezuela itself, the U.S. gave its tacit approval of a coup attempt against Maduro’s predecessor Hugo Chavez in 2002. Declassified CIA intelligence briefings show that the George W. Bush Administration had prior knowledge of the opposition’s plans and did not share their information with Chavez. He was deposed for less than 48 hours until overwhelming popular support and loyalists in the military helped return him to power.

How does Guaidó compare to the right-wing groups the U.S. supported in the 20th century?

There are fundamental differences between what happened in the 1960s, 70s, and 80s and what is happening today. First is the humanitarian situation inside Venezuela. Soon after Maduro came to power in 2013, a drop in global fuel prices – and severe economic mismanagement by the regime – plunged the country’s oil-backed socialist model into chaos, with many unable to access food or basic medicine. Over 3 million people — a tenth of Venezuela’s population — have fled the country. Arbitrary detentions and violent repression have become the norm as the regime, backed by the military, clings to power.

A second key difference is that Guaidó, who belongs to the center-left Popular Will party, does not plan to become Venezuela’s permanent president. According the Venezuelan constitution, when the National Assembly leader assumes power in a situation like this, he must call elections within 30 days.

Thirdly, Guaidó appears to have the backing of a significant section of the Venezuelan population. Tens of thousands of people turned out for protests that he called on Jan. 23, in a show of support for his plan to assume the presidency. Venezuelan exiles in other countries also held rallies in favor of Guaidó.

Is the U.S. likely to send in troops to help Guaidó take power?

President Donald Trump told reporters Wednesday that “all options are on the table” in the Administration’s response to the current crisis. In late 2017 and early 2018, Trump administration officials met with rebels in Venezuela to discuss their coup plans, but decided against giving them material support, according to a report by The New York Times. Some — including Florida Senator Marco Rubio — have said there is a “very strong argument” for military intervention in Venezuela.

But many strongly advise against such a move. Venezuela’s military has pledged to support Maduro and strategists say a confrontation with them could prove costly, long-winded and futile — or risk turning into a military occupation. The Pentagon’s former top official in charge of overseeing South American operations told Vox that there isn’t “a good reason” for the U.S. to try to oust Maduro. On Twitter, Vermont Senator Bernie Sanders reminded his followers of the history of U.S. intervention in the region, speaking out against the Maduro regime but also against Washington actively supporting regime change. “We must not go down that road again,” he said.

Still, some now speculate that the tense stand-off over U.S. diplomatic staff will lead the White House to take some kind of action. With Maduro ordering them to leave and the U.S. refusing to recognize Maduro’s authority, an unknown number of embassy staff are waiting under a security alert in Caracas. Secretary Pompeo said in a statement Wednesday that “The United States will take appropriate actions to hold accountable anyone who endangers the safety and security of our mission and its personnel.”

Inside Venezuela, a great deal may hinge on the public protest movement. Demonstrations could be quickly put down by the security forces — at least 14 died in Wednesday’s marches — and Guaidó could be arrested, as hundreds of other political activists have been since Maduro’s reign began. But, if protests grow too big for the military contain them, analysts say the lower and mid-ranks of the armed forces may begin to refuse orders from the Maduro-loyal top brass, and eventually force the military to withdraw support for Maduro.

With or without U.S. involvement, the next few weeks will likely be decisive for Venezuela’s future. 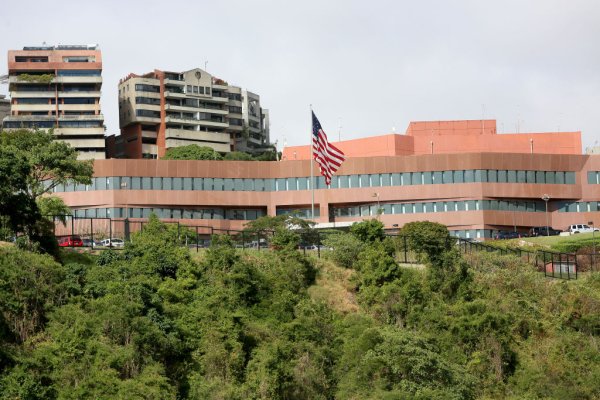 Standoff Grows at U.S. Embassy in Venezuela
Next Up: Editor's Pick