'We Cannot Even Calculate the Level of Risk.' Air Traffic Controllers Issue Dire Warning About Air Safety During the Shutdown

Air traffic controllers, pilots and flight attendants issued a stark warning about the safety of air passengers during the partial government shutdown, calling for the White House and Congress to find a solution.

“In our risk averse industry, we cannot even calculate the level of risk currently at play, nor predict the point at which the entire system will break. It is unprecedented,” the unions for all three groups said in a statement on Wednesday.

The longest-ever government shutdown, now exceeding one month, has left an estimated 380,000 federal workers furloughed, and forced another 420,000 to work without pay.

Meanwhile, many airports have had to close security checkpoints due to TSA sickouts – with a growing number of TSA screeners not showing up for work due to the financial burden of working without pay.

“As union leaders, we find it unconscionable that aviation professionals are being asked to work without pay and in an air safety environment that is deteriorating by the day,” the union leaders said. “To avoid disruption to our aviation system, we urge Congress and the White House to take all necessary steps to end this shutdown immediately.”

That message was echoed Wednesday by five former Department of Homeland Security secretaries, who drafted a letter urging the Trump Administration and Congress to restore funding for the agency’s security, law enforcement and emergency preparedness work, which also extends to aviation security.

“We call on our elected leaders to restore the funding necessary to ensure our homeland remains safe and that the Department’s critical national security functions continue without compromise,” they wrote.

Among those to sign the letter was Trump’s former chief of staff, retired Marine Gen. John Kelly. 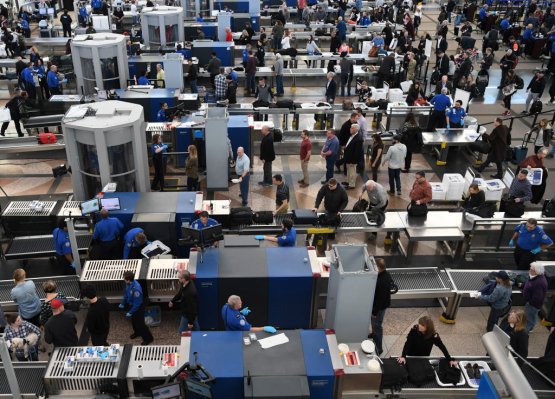 1 in 10 Airport Screeners Are Calling in Sick. Experts Are Worried — But Some Have Solutions
Next Up: Editor's Pick