The U.N. children’s agency says it is making gains in the effort to provide education for hundreds of thousands of Rohingya children who fled violence in Myanmar, but much work remains to provide adequate services in the world’s largest refugee camp.

UNICEF said Thursday that more than 145,000 Rohingya children living in refugee camps in Bangladesh are now attending “learning centers” supported by the agency as a new school year gets under way. Humanitarian workers have so far built around 1,600 such centers throughout the camps.

“The scale of the Rohingya refugee crisis demanded a rapid response,” Edouard Beigbeder, UNICEF’s representative to Bangladesh, said in a statement. “This year we are scaling up services to reach more children than ever before, while focusing on improving the quality of education each child receives.”

More than 920,000 Rohingya, a mostly stateless Muslim minority from western Myanmar, currently live in camps and host communities scattered across Cox’s Bazar, a district of southeast Bangladesh. Most of them — upwards of 700,000 — arrived since August 2017, when the Myanmar military launched a brutal crackdown on the group in response to insurgent attacks.

The U.S. has labeled the ensuing violence “ethnic cleansing,” while U.N. investigators have called for Myanmar military leaders to face charges of genocide. Myanmar denies committing atrocities despite widespread allegations of arson, sexual violence and killing of civilians. The International Criminal Court has launched a preliminary examination into Myanmar’s “deportation” of the Rohingya, considered a crime against humanity.

Read more: These People Don’t Have Time to Mourn: Photographs by Dar Yasin

Humanitarian workers estimate that about 60% of the refugees who fled in recent years are children, while more are born each day in the squalid encampments.

“Many children have suffered trauma injuries from gunshot wounds and extreme violence, restricting their mobility and access to services,” said Iffat Farhana, an education officer for UNICEF based in Cox’s Bazar, adding that physical and learning disabilities further hinder education efforts.

UNICEF aims to reach 260,000 children with education services this year by extending its network of learning centers to about 2,500. The agency is also increasing efforts to provide vocational and other training to adolescents, as there is currently no secondary education available. According to UNICEF, 97% of Rohingya refugees aged 15-24 receive no education at all.

“I’ve been coming to class for almost a month now,” said Minara, an 11-year-old refugee who stopped studying after arriving in Bangladesh because the conditions in makeshift educational centers were dirty and hot, according to UNICEF. “It’s nice here,” she said of the new facilities, with approval. “It doesn’t have a muddy floor.” 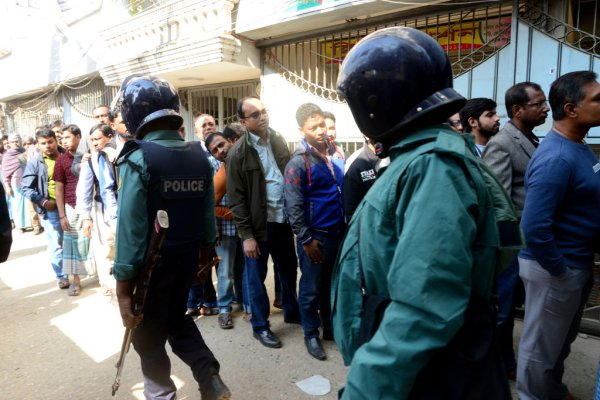 Bangladesh Elections Marred by Voter Suppression
Next Up: Editor's Pick