A Political Crisis Is Sweeping Venezuela. Here's What to Know

Venezuelan President Nicolás Maduro met his most serious challenge to date when opposition leader Juan Guaidó declared himself president Wednesday following days of nationwide anti-government protests. Demonstrations swelled on the anniversary of the 1958 coup that overthrew military dictator Marcos Perez Jimenez, as a newly united opposition marshaled the first mass protests since a bloody crackdown in 2017 that left at least 120 people dead. At least seven people have been reported killed in this week’s protests, according to the Associated Press.

Maduro, who was re-elected last year in a vote marred by allegations of vote-rigging and a suppressed opposition, is under pressure from the U.S. and other governments for what is viewed as his increasingly authoritarian leadership and undemocratic policies. At home, he faces growing disapproval from ordinary Venezuelans, who have suffered under economic policies that brought about a steady erosion of the country’s economy and crippling inflation rates. Despite the latest challenge to his rule, Maduro has shown no indication that he is willing to step down.

Maduro and Guaidó are now locked in a showdown, with much of the international community backing the 35-year-old opposition leader’s claim to interim power. Speaking to demonstrators in the capital Caracas on Wednesday, Guaidó declared that he would “formally assume the powers of the national executive as president in charge of Venezuela.”

As the leader of Venezuela’s parliament (which Maduro stripped of its powers in 2017), Guaidó says the constitution gives him the right to become president if there is a vacuum of power in the country. He claims Maduro’s illegitimate second term is just that. He recognized that the move was risky, but said it was a necessary step to restore order and save Venezuela from “dictatorship.”

“We know that this will have consequences,” he said. “To be able to achieve this task and to re-establish the constitution we need the agreement of all Venezuelans.” Prior to January, Guaidó was a little known figure, but he has risen to power quickly as the new head of the opposition-led congress. Maduro has dismissed his assumption of power as part of an American conspiracy.

“I am the only president of Venezuela,” Maduro said, according to the New York Times. “We do not want to return to the 20th century of gringo interventions and coups d’etats.”

What led to the breaking point?

Once the wealthiest nation Latin America, Venezuela has descended into chaos. A drop in global oil prices in 2014 made Venezuela’s oil-backed socialist model impossible to sustain. And, since taking over from his mentor Hugo Chavez in 2013, Maduro’s economic mismanagement has driven the country into humanitarian crisis. Hyperinflation, which the IMF estimates will reach 10 million percent by 2019, has led to mass food and medical shortages. Crime is rampant and starvation has become known as the “Maduro diet.” More than three million of the country’s 31 million people have fled, according to the U.N. migration agency.

Determined to hold on to power despite growing resistance from the public, the government has become increasingly authoritarian. More than 400 people have been jailed for political reasons under Maduro, according to the New York Times.

A protester stands near burning barricades during a demonstration against Nicolas Maduro in Caracas on Jan. 23, 2019.
SOPA Images—LightRocket/Getty Images

Until now, opposition parties have been divided over how to confront the government. But Guaidó’s claim to power has unified both politicians and the public against Maduro. Since he first announced his intention to take the presidency on Jan. 11, resistance has swelled. On Monday, the security forces thwarted an attempted pre-dawn uprising by members of the National Guard, arresting 27.

Wednesday’s protests were the largest since 2017, with tens of thousands marching throughout the country.

How has the international community responded?

The self-proclaimed interim government already has the backing of the U.S., Canada, and many Latin American countries including Argentina, Brazil, Canada, Chile, Colombia, Costa Rica, Guatemala, Honduras, Paraguay and Peru. Australia is also considering shifting its support to Guaidó, according to the AP. A senior Turkish official said President Recep Tayyip Erdogan has voiced his support for Maduro.

Venezuelans living abroad in Brazil, Mexico, Argentina and elsewhere in Latin America have reportedly taken to the streets in solidarity with the new interim government.

President Donald Trump officially recognized the new president Wednesday, saying the “people of Venezuela have courageously spoken out against Maduro and his regime and demanded freedom and the rule of law.”

Secretary of State Mike Pompeo issued a statement saying the U.S. “stands with interim President Juan Guaido, the democratically elected National Assembly, and the people of Venezuela as they peacefully restore constitutional order to their country.”

Maduro announced that he would cut ties with the U.S. and demanded that all American diplomats leave the country within 72 hours. But in a sharp rebuke, Pompeo dismissed the call, saying the U.S. “does not recognize the Maduro regime as the government of Venezuela.”

“Accordingly,” the statement went on, “the United States does not consider former president Nicolas Maduro to have the legal authority to break diplomatic relations with the United States or to declare our diplomats persona non grata.” 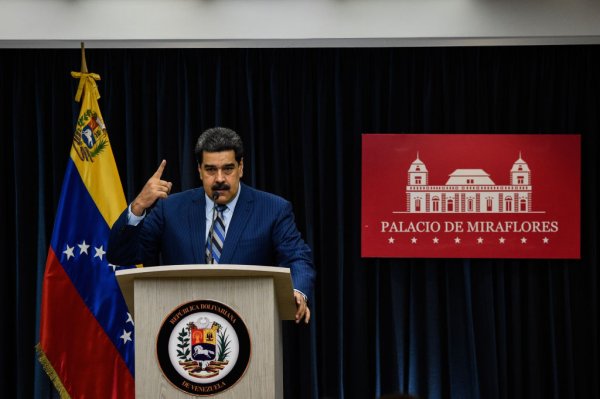 A Venezuelan Supreme Court Judge Has Fled to the U.S.
Next Up: Editor's Pick