The Story Behind TIME's 'Beyond Walls' Covers

For this week’s cover story, TIME turned to Davide Monteleone to create a series of powerful black and white portraits that humanize the larger story of global migration.

We were inspired by Monteleone’s personal project, “In the Russian East,” which was influenced by Richard Avedon’s renowned series, “In the American West.” Both photographers were inventive in how they framed their subjects — allowing the individuals or families to literally carry over across the borders of the image. “The choice was appropriate to recall what America is built on: a large number of working migrants from all over the world,” Monteleone told TIME. “This is equally true nowadays in Europe.” When TIME called Monteleone to discuss the project, he explained that he was currently in London working on his Masters in Art and Politics with a personal concentration in migration and mapping systems. It couldn’t have been a more perfect fit.

Diógenes Banegas draws a map of his journey from Tegucigalpa, Honduras, to Tijuana, Mexico, as the TIME crew and other migrants follow along.
Photograph by Thea Traff for TIME

TIME sent Monteleone and a small multimedia team to Tijuana in late November 2018, as a large migrant caravan arrived at the Mexico-U.S. border. Monteleone taped a simple white vinyl backdrop on a wall outside a migrant camp, and in between rain showers, interviewed and photographed dozens of migrants. “Eliminating the desperate conditions in which migrants are generally depicted allows the viewer to reflect on the story of the individual rather than the stereotypical ideas surrounding the migratory experience,” Monteleone said. To help convey the incredible risks many migrants faced along their journeys, we asked them to draw maps of their routes. Many of their illustrations can be seen in a video at TIME.com/migrants.

In between rain showers, photographer Davide Monteleone (left) photographed migrants against a white vinyl backdrop (right) on a wall just outside a migrant camp in Tijuana, Mexico.
Photographs by Thea Traff for TIME

As part of the project, Monteleone also traveled to Germany to photograph migrants who fled the civil war in Syria and to Murfreesboro, Tenn.. There, he photographed cover subjects Albertina Contreras and her daughter, Yaquelin Yohana Garcia Contreras, as they wait to hear if they will be granted asylum in the U.S. Monteleone photographed Albertina and Yaquelin individually, and asked them to hold hands just outside the frame. The intent was to visually represent the idea of separation and reunion — a reality that the mother and daughter faced after they were separated and eventually reunited after arriving in the U.S. last May. 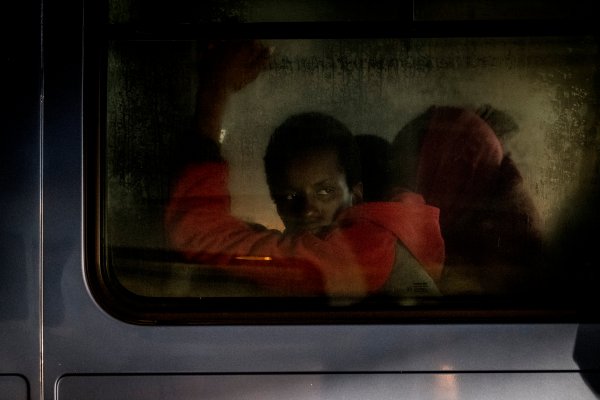