Stacey Abrams Is Delivering the State of the Union Rebuttal. Here’s the History Behind the Speech

When Stacey Abrams delivers the rebuttal to President Trump’s State of the Union address on Tuesday night, she will both continue and buck tradition in terms of the fairly recent history of these kinds of speeches.

And recent history is all the history there is. While the origins of the State of the Union address date back to the very founding of the nation — the third section of Article II in the U.S. Constitution states that the President “shall from time to time give to the Congress information of the state of the union” — the origins of the televised rebuttal are much newer.

Senate Minority Leader Everett Dirksen (R-IL) and House Minority Leader Gerald Ford (R-MI) delivered the first such opposition response (dubbed “State of the Union—A Republican Appraisal”) on Jan. 17, 1966, five days after that year’s State of the Union address from President Lyndon B. Johnson. It wasn’t live the way this year’s will be; it was recorded during the day and broadcast later in the evening. The President’s annual address had been broadcast on network television for nearly two decades by that point, and deliberate steps had been taken in the intervening years — such as moving the speech to an evening time slot — to increase the viewing audience, which was a win for the networks as well as the White House.

But when it came to some of the day’s most important issues, that first rebuttal didn’t do much to actually oppose the President.

“Their comments on the [Vietnam] war amounted to an endorsement of Johnson’s policy,” TIME reported back then. “‘Let the peace efforts continue,’ pealed Dirksen. ‘Let the military effort continue. It demonstrates our determination to keep our word.'” While Ford had opinions on how to raise money for the Vietnam War that didn’t have to do with increasing taxes, he “did not criticize the U.S. role in Vietnam.” However, he did get a jab in at the Great Society’s anti-poverty programs, arguing that they could be run better “by liberating the war on poverty from waste, controversy and the bad odor of political bossism.”

It wasn’t the duo’s first time speaking together; they were famous for holding regular news conferences that became known as “The Ev and Jerry Show.”

Rebuttals — which have happened most years since then, though not every single time — continued to be a team effort throughout the 1970s and 1980s. At some points, groups of up to a dozen Democrats from both chambers of Congress delivered it, though just one or two people have taken the mic at a time since the late ’80s.

Perhaps not surprisingly, some of politicians tapped by their parties for this role have become even more famous after rebutting the State of the Union, so much so that some have leveraged the prime-time spotlight to run for President.

Colorado Senator Gary Hart was part of a group that delivered the opposition response in 1982, and went on to be considered the Democratic front-runner of the 1988 presidential race, until extramarital indiscretions forced him to drop out. Al Gore was in that 1982 group too, back when he represented Tennessee in the House, and he went on to be Vice President to Bill Clinton — who was himself one of three politicians who participated in a televised discussion among randomly selected Democratic voters in 1985, that year’s version of the rebuttal. Joe Biden was part of a group of 12 Democrats who delivered the opposition response in 1983 and 1984, and he went on to be Barack Obama’s Vice President. Responders have also gone on to Cabinet positions; a year after Kathleen Sebelius delivered the opposition response to President’s Bush’s speech in 2008, she was Obama’s Secretary of Health and Human Services.

But for others, the opposition response has been considered a “curse.”

In 1989, four months after responding to George H.W. Bush’s State of the Union response, Texas Democrat Jim Wright became the first House Speaker to resign because of an ethics scandal. Kansas Republican Bob Dole, once the longest serving GOP Senate leader, lost the 1996 presidential election shortly after delivering the 1994 and 1996 rebuttals to Clinton’s State of the Union addresses, while in 2004, Senate Minority Leader Tom Daschle (D-SD) didn’t get re-elected just months after he and Nancy Pelosi delivered the rebuttal to George W. Bush’s address. Social media users mocked Senator Marco Rubio (R-FL) for reaching awkwardly far off-camera for a water bottle mid-way through his 2013 rebuttal to Obama’s speech, while Rep. Joe Kennedy III (D-MA) applied so much chapstick that Twitter users thought he looked as if he were drooling. And Bobby Jindal’s rebuttal to Obama’s 2009 address, which was described by TIME as “wooden,” has been seen as a missed opportunity to make a good impression on voters, which could have helped his later hopes of cinching the GOP nomination for President.

Abrams, the former Minority Leader of the Georgia House of Representatives and the first black female gubernatorial nominee of a major political party, represents the latest up-and-comer selected by leaders of the opposition party to take on the task.

The speech will be a chance for her to shine and bolster her national recognition in prime-time, which is itself nothing new, but Democrats will also hope it serves the function of, well, rebutting the President. Political scientists observe that those chosen to deliver the opposition response often personally represent populations to whom the party wants to speak. Republicans have tended in the past to pick more women to do the job, arguably to clap back at criticism that they don’t support policies friendly to women. This year’s choice of Abrams has been described as an effort by Democrats to encourage minority groups to stay positive, and the party wants to keep up the momentum that led to unprecedented turnout of black women generated by her gubernatorial campaign.

An analysis of rebuttals to the State of the Union from 1966 to 2006 by political scientist Costas Panagopoulos also found that the party that doesn’t control the White House has increasingly been choosing rebutters “who are more and more ideologically extreme in their policy positions based on roll call votes on average” compared to the President delivering the State of the Union — and that Democrats did this more than Republicans. The more ideologically extreme they are compared to the President, the more effective the rebuttal appears to be too, he concludes, based on presidential approval ratings before and after the speech.

That said, as the U.S. has grown increasingly polarized, the State of the Union and its rebuttal are both less likely to change hearts and minds.

“It’s been even harder to observe dramatic shifts in public opinion in a more polarized political climate in which both sides are entrenched and settled in their positions,” Panagopoulos tells TIME. “People are going into the State of the Union with fixed views on the President. Whatever they hear will be perceived selectively.” 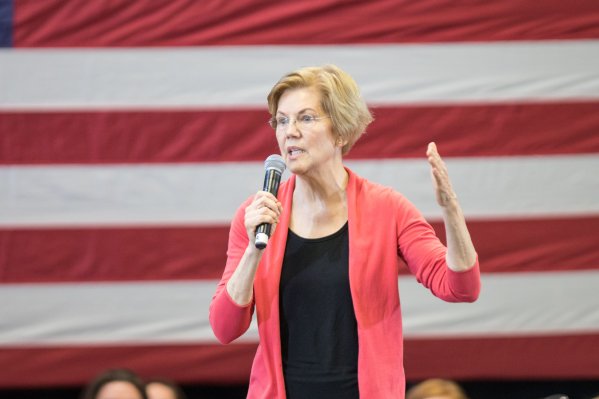 Elizabeth Warren’s Wealth Tax on the Super-Rich Is the Wrong Solution to the Right Problem
Next Up: Editor's Pick