Nicholas Sandmann isn’t sorry. Over the weekend, the Kentucky teen became a symbol of America’s bitter political polarization when video footage circulated of him seeming to stare down Native American elder Nathan Phillips with a smirk on his face and a “Make America Great Again” cap on his head. The confrontation took place after an anti-abortion march on the National Mall that Sandmann attended and the March for Indigenous Peoples, in which Phillips was participating. On Wednesday morning, Sandmann appeared on the Today Show in a taped interview. Asked by co-host Savannah Guthrie whether he owed anyone an apology, Sandmann replied, “As far as standing there, I had every right to do so. My position is that I was not disrespectful to Mr. Phillips.” The Covington Catholic student added: “I can’t say that I’m sorry for listening to [Phillips] and standing there.”

It was a bizarre conversation from the beginning: Dressed in calming earth tones and betraying not the slightest trace of a smile, Sandmann looked so somber as to be nearly unrecognizable from the footage released days earlier. He spoke slowly and softly, with the unnatural caution of someone who’s been made to understand that his every public utterance will be dissected for traces of smugness. Though it’s impossible to know for sure whether he was coached, it’s also impossible to watch the interview without recalling that the boy’s family hired a PR firm with deep Republican ties soon after his image went viral. Unfortunately, Today didn’t find time to inquire about that eyebrow-raising relationship—or to ask many other questions that might have made the nine-minute segment worthwhile.

Guthrie, who has been criticized for giving Sandmann a platform since she teased the interview Tuesday afternoon on Twitter, allowed him to defend himself: He reiterated that he and his Covington classmates had been provoked by slurs from Black Hebrew Israelites, whose role in the confrontation wasn’t apparent in the viral footage. (It’s worth noting that, although the Israelites are a fringe movement Today framed as extremist, citing the nonpartisan hate-group watchdog Southern Poverty Law Center, Sandmann at one point alarmingly referred to them simply as “the African Americans.”) He maintained, without any pushback from Guthrie, that what the social media masses read as a smirk was, in fact, “a smile saying that this is the best you’re going to get out of me” and that he was actually attempting to de-escalate the situation. When she inquired about the impact the media attention had on his family, Sandmann said, “It’s been terrible. People have threatened our lives.”

The problem isn’t necessarily that he was trying to cast himself in the best possible light. Only Sandmann can know for sure whether his characterization of his intentions was truthful—though Guthrie might have pressed him for details he hadn’t already provided in the lengthy statement his representatives circulated to the press. Certainly, what transpired between the Covington students, Phillips and the Israelites was complicated enough that not one of the many videos that have surfaced in recent days has provided a definitive picture of the encounter. And I’d hope that both Sandmann’s defenders on the right and his detractors on the left could at least agree that there was little reason to make this particular kid a household name.

The thing is, this story was never really about who said or did what to inflame whom at the Capitol. High schoolers getting into trouble on school trips is not news. The video went viral because the images it contained drew such an immediate, visceral response: Knowing only that Sandmann was a white teenage boy in a MAGA hat surrounded by a pack of other white teenage boys—some in MAGA hats, some yelling—at an anti-abortion protest, observers on the left felt certain that they were peering into the soul of white, male privilege.

Some conservative pundits have framed 16-year-old Sandmann as the target of liberal bullying, a charge that may have informed Guthrie’s softball interview. Meanwhile, voices on the left have likened this argument to the right’s dismissal of decades-old sexual assault allegations against Supreme Court Justice Brett Kavanaugh—who was, at the time, a young, white private school boy. As Chris Hayes argued Tuesday in a monologue on his MSNBC show All In, this reaction from the left might have, in turn, enraged conservatives because, in recent years, “those who enjoy a basic kind of American privilege—the right to due process and second chances and charitable readings of their actions and even mistakes—[have found] themselves, seemingly without warning, tossed onto the unforgiving bonfire of snap judgment and harsh punishment.”

This bonfire is nothing new to unarmed black victims of police violence or female rape victims who’ve had their credibility called into question because they wore something revealing on the day of their assault. Yet—even if you ignore the reality that the consequences of the left’s snap judgment of Sandmann has been limited to some negative attention—it still isn’t fair to compare his supposed persecution with that of people who face discrimination and violence simply because of who they are. “People have judged me based off one expression,” Sandmann told Guthrie. “They’ve gone from there to titling me and labeling me as a racist person, someone that’s disrespectful to adults—which, they’ve had to assume so many things to get there without consulting anyone that can give them the opposite story.” But that’s not the full story. People also judged Sandmann because he was a white person wearing a hat that has become a symbol of policies many interpret as racist and xenophobic—and because he was a boy attending a demonstration in support of a position many view as misogynistic.

In both cases, Sandmann was engaged in acts of political speech—acts on which he has thus far failed to elaborate. As a journalist, Guthrie had a responsibility to help contextualize his actions by pressing him about his intentions in wearing the hat and attending the march. Instead, by taking Sandmann at his word, she simply gave him an additional platform from which to proclaim his blamelessness. Guthrie noted in a voiceover that he denied seeing classmates perform what looked to be a tomahawk chop in the presence of Native American protesters. And she dropped all discussion of Sandmann’s politics after a weak question about whether the hat might have contributed to the face-off with Phillips received a noncommittal response: “It’s possible.” When all was said and done, the interview was just one more win for a PR team that has largely succeeded in keeping the values Sandmann and his friends expressed in Washington out of a controversy that has everything to do with them. 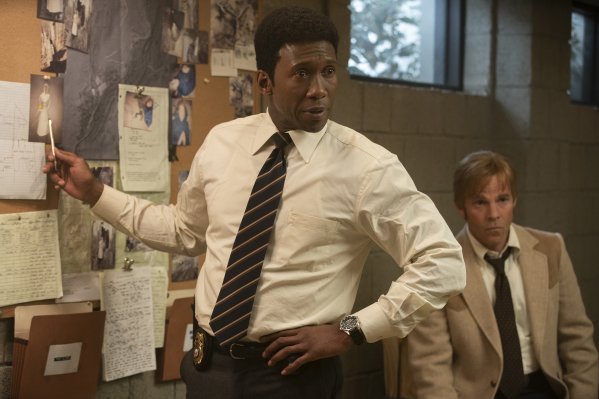 The Real-Life Cases That Inspired True Detective Season 3
Next Up: Editor's Pick