The 11 Best Airports for Layovers, According to Experts

Given the choice, most travelers will opt to fly direct. There are however, times when a layover isn’t a nuisance, but rather an experience in and of itself. While all airports have your run-of-the-mill tarmacs and terminals, some boast luxury lounges, aquariums, gardens, pools and authentic eateries.

So, the next time your trip calls for a connection, consider routing flights through these 11 airports around the world—travel hubs where experts enjoy spending their downtime in between flights.

Travelers waiting for departure at one of the lounges (Schengen area) at Schiphol Airport, Amsterdam, The Netherlands.
EschCollection—Getty Images

Amsterdam Airport’s location means several European cities are a short flight away—and it’s a comfortable airport to stop at between jaunts, says Alberto Riva, managing editor at The Points Guy. With plush couches and numerous resting areas, “you don’t need access to a lounge to enjoy connecting through here,” Riva says. The airport offers a mini-art gallery with works from Dutch artists, duty-free shops with “all the cheese and stroopwafels you want and an indoor ‘park’ complete with the sound of chirping birds and even a viewing terrace for the aviation geeks,” he says. The park also includes bean bags to relax on and exercise bikes that charge your phone while you pedal.

If you happen to have an extended layover, Singapore’s Changi Airport features art installations, a rooftop garden, a lily pond and a swimming pool—so it’s unlikely you’ll experience boredom while awaiting your next flight, according to Lauren Coppola, a Southeast Asia product executive with bespoke travel company Audley Travel.

What’s more, the airport boasts a movie theater, a butterfly garden and the world’s tallest airport slide where you can plunge down the four-story chute for fun. The airport also features traditional-style Asian shophouses where you can buy local jewelry or embroidery, and a wide array of gourmet restaurants to choose from. “If you have time to go into the city, there is a convenient train link and Singapore has a clean and safe public transit system,” Coppola says. The journey from the airport to the city takes just about 30 minutes.

The airport in Dubai hosts travelers from all across the globe, and is said to be one of the busiest airports in the world. It’s no wonder it boasts an expansive and grandiose setup — from luxe shopping (think gold jewelry everywhere) to a fancy in-airport hotel health club, where travelers with some money to spare can stop in for a sweat or a shower, says Rhonda Vetere, a business executive who traveled 237 days last year. If you happen to have an extended layover, “rent a car and go on a dune buggy ride or camel ride,” she says. It’s easily accessible from the airport — just make sure to book in advance.

Christmas and Winter Market and ice rink in the Munich Airport.
klug-photo—Getty Images

If you’re feeling festive, the Munich Airport is the ideal layover. “My favorite spot for an extended layover is Munich Airport, especially around Christmas,” says Nick Ewen, senior editor of points and miles at The Points Guy. Starting in late November every year, the airport transforms the open-air atrium between terminals 1 and 2 into a veritable yuletide dream, he says — replete with handmade crafts, glühwein (mulled wine) and an ice skating rink. “It’s a great way to experience the wonders of a German Christmas market while in transit,” Ewin says. In addition to the ice skating rink, the airport features a carousel for kids to enjoy.

Iceland has been a stopover for flights to Europe for half a century, says Jason Cochran, editor-in-chief of Frommers.com. But part of what makes the airport a perfect layover is its close proximity to the famous Blue Lagoon. If time permits, Cochran suggests taking a trip to the geothermal spa “that weary transatlantic passengers have used to revive themselves since the Jet Age began.” With four or five hours to spare, you’ll get an authentic taste of Iceland’s natural wonders, which you can’t say of almost any other layover city, Cochran notes. The airport itself also has luggage lockers so you can explore the nearby tourist sites baggage-free.

“I don’t find myself there often, but I really like connecting in Doha,” says Zach Honig, editor-at-large for The Points Guy. This layover is ideal for travelers who have time—and money—to spare. If you fly Qatar Airways business class, you’ll get access to the Al Mourjan Business Lounge in the airport, which includes posh showers, nap pods, a large dining room and a high-end bar, he says.

Flying first class? You can go to the Al Safwa First Lounge, where you’ll find private bedrooms, à-la-carte dining and cool architecture, he says. And if you have a little more time on your hands, consider staying at the four-star Oryx Airport Hotel located inside the airport. “Guests have access to a full-size pool and a sizable fitness center with a variety of equipment — it even includes a couple of squash courts,” Honig says.

Doha’s airport also has a variety of duty-free shops and perhaps the funkiest airport art in the world, according to Honig, including a 23-foot bronze teddy bear that sits inside a lamp.

At first glance, this Atlanta airport may seem like any other major U.S. travel hub, but what makes it stand out is its nod to a storied history, according to Cochran. “It’s done a good job of bringing in some authentic old-guard Atlanta restaurants,” says Cochran, who suggests making your way to The Varsity—a downtown Atlanta institution, and self-proclaimed “World’s Largest Drive-in Restaurant”— for old-school diner delights like chili dogs, onion rings and creamy milkshakes called “Frosted Oranges.” He also suggests venturing to the airport offshoot of Paschals, a legendary soul food restaurant that was a major meeting place for civil rights leaders like Martin Luther King, Jr. in the 1960s.

A layover is anything but conventional when you’re met with an ocean breeze and bright blue lagoons. Velana International Airport, an international gateway in The Maldives, is a great place to spend a few hours or even half a day, says Darren Murph, senior points and miles writer for The Points Guy. “There are priority pass lounges available in both the international and domestic terminals, and its open construction allows for fresh air to bolster your mood,” he says. Priority Pass lounges offer a vast array of amenities, from credits for food and drink to access to a lounge with spa facilities.

And for a lengthier layover, you can hire a local guide to whisk you from the airport by boat and take you to Malé, one of the most densely populated cities in the world, for a local meal or an exploration of its cultural sites, according to Murph. “Catch a glimpse of the non-resort side of this otherworldly archipelago,” he suggests.

Hong Kong’s airport is decidedly high-tech, featuring magic mirrors that allow you to see what different shades of makeup or clothing look like on you. The international travel hub is also quite efficient, with its easy access to public transportation options, says Vetere. If you have five or six hours to fill, Cochran suggests taking a quick trip to nearby Disneyland. “The park is on the same island as the airport, so in about 30 minutes you can take the MTR subway train from the terminal right to the front gates of the theme park,” he says. “There’s even a kiosk where you can store your luggage for the day while you ride coasters and see the shows.” And if you need a pre-flight pick-me-up upon your return to the airport, “Cathay Pacific has a fabulous champagne lounge,” Vetere says.

If you’re a marine life aficionado, this Canadian airport will likely make for the perfect layover. The Vancouver Aquarium runs two exhibits at the Vancouver airport, according to Santina Pacetti, an aviation manager at Audley Travel. “Head to the international terminal where a 114,000-liter aquarium sits as a permanent exhibit,” she says. It’s home to over 5,000 creatures including wolf eels, anemones, sea stars, kelp greenlings and sea urchins and an 1,800-liter jellyfish aquarium, Pacetti adds.

“The first thing I want to do after a long flight is stretch my legs and feel connected — no matter how tangentially — to the outside world,” says Scott Mayerowitz, executive editorial director at The Points Guy. Last year, this airport opened its new Terminal 2 filled with oversized windows, natural light and lush, mini indoor gardens and trees. If you have some time to spare, the airport offers free tours of nearby local spots. “They can be as short as a one-hour hop to a local beach or a five-hour shopping excursion,” Mayerowitz says. “Personally, I would pick one of the temple or palace tours.” 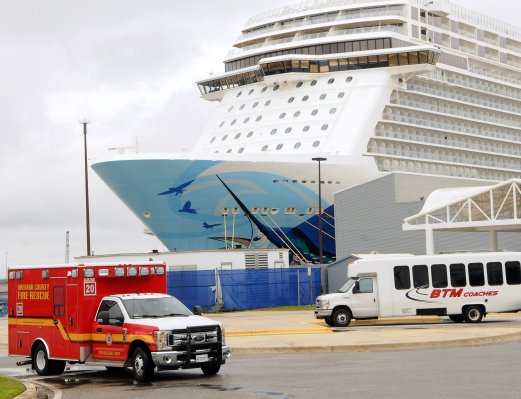