Four days after Nick Sandmann sparked national controversy for an apparent confrontation with Native American veteran Nathan Phillips in Washington, D.C., the Kentucky high schooler has given his first interview.

On Tuesday, NBC released a clip of Sandmann’s talk with the Today show’s Savannah Guthrie. In the snippet, Guthrie asked Sandmann whether he owed anyone an apology or saw fault in himself “in any way” for the encounter.

“As far as standing there, I had every right to do so,” Sandmann told Guthrie. “My position is that I was not disrespectful to Mr. Phillips. I respect him. I’d like to talk to him.”

The Covington Catholic High School junior went on to say that he would have rather the entire incident not happened.

“In hindsight I wish we could have walked away and avoided the whole thing,” he said.

Students from Covington Catholic High School were in Washington, D.C., Jan. 18 for the anti-abortion March for Life rally while Phillips was at the National Mall for the Indigenous Peoples March. The incident took place in front of the Lincoln Memorial on the National Mall.

After he and his classmates were widely criticized online for the clip of their confrontation with Phillips, Sandmann has been quick to establish his own side of the story. On Sunday, he released a statement that said Phillips had singled him out “for a confrontation.”

On Tuesday, President Donald Trump weighed in on the politically fraught story, saying that the high school student has become a symbol of “Fake News and how evil it can be.”

Sandmann’s full interview will air on Wednesday during the Today show. 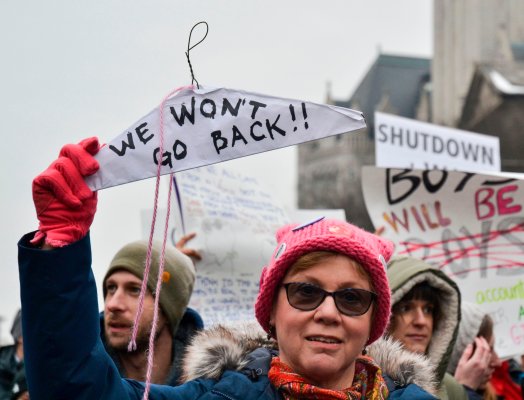 Women's March Attendance Down in Light of Controversy
Next Up: Editor's Pick