A viral video depicting a standoff between Catholic high school students and a Native American elder has become a Rorschach test for people’s political beliefs, as well as a renewed warning of social media’s ability to sow political division.

The video, which went viral on Saturday, showed Nick Sandmann, a junior at Kentucky’s Covington Catholic High School, staring down Nathan Phillips, an Omaha Tribe veteran and activist who was drumming and singing a ceremonial song, on the steps of the Lincoln Memorial on Jan. 18 following the March for Life and the Indigenous Peoples March. Other videos, which emerged later, showed that the incident had started with the students being taunted and insulted by a group of Black Hebrew Israelites, who believe that African Americans are the true descendants of the biblical Israelites. A video compilation published by The New York Times on Tuesday offers a clearer play-by-play of what occurred throughout the interaction.

But the original viral image — of a young white man grinning in a “Make America Great Again” hat after participating in an anti-abortion march and a Native American elder who marched to raise awareness about injustices against indigenous people — quickly became a symbol of polarizing issues dividing the country.

The confrontation may well have garnered plenty of attention organically, based on social media posts and videos from people who witnessed the interaction first-hand. But experts say it’s worth examining how much of the amplification and outrage was the result of social media activity aimed at boosting engagement by fueling polarization.

“A huge chunk of what people think of as spontaneous and viral is actually manipulated … there are networks of accounts that try really hard all day trying to get certain kinds of content to trend and go viral,” says Matthew Hindman, an associate professor at George Washington University who studies online disinformation. “At this point, we should expect this — that a large fraction, maybe even a majority, of the viral controversy that we see has some form of non-organic manipulation tied to it.”

At least one apparently fraudulent account helped to spread the viral video of Sandmann and Phillips, and was suspended by Twitter on Monday, CNN Business first reported. The version of the video shared by that account, @2020fight, was viewed at least 2.5 million times and retweeted at least 14,400 times, CNN reported. It’s not clear who was behind the account, which was created in December 2016 and had a bio claiming to be a “Teacher & Advocate. Fighting for 2020″ in California, though its profile picture actually belonged to a blogger in Brazil. “Deliberate attempts to manipulate the public conversation on Twitter by using misleading account information is a violation of the Twitter Rules,” a Twitter spokesperson said in a statement.

The House Intelligence Committee has asked Twitter to provide more information about the account, HuffPost reported. And a spokesperson for Virginia Sen. Mark Warner, vice chairman of the U.S. Senate Select Committee on Intelligence, confirmed that his office has had “preliminary conversations” with Twitter about it.

The behavior of the account matches that of Russian-linked accounts leading up to the 2016 presidential election, and during the 2018 midterms. But there is not yet any evidence the account had Russian ties. Still, the incident serves as an example of how social media can be used to sow division and tap into political polarization, as thousands of Russian accounts have aimed to do in recent years.

“The goal with coordinated campaigns is always to insinuate them into a larger political narrative and especially a particular sense of political identity,” Hindman says. “The concern is that these kinds of efforts look for events, real events or fake events, that appeal to these deep-seated identities, and they do this not out of real concern, but for mercenary purposes.”

Regardless of the account owner’s intent, experts say the episode is further evidence that video, despite offering more context than still photographs, can still fall well short of telling the whole story behind an event. “The point is that we can’t necessarily rely on video narrative alone. We always need to translate events into their larger context,” says Monica Stephens, a University at Buffalo assistant professor who studies misinformation and incivility on social media. “Those of us who are not there on the ground, we’re only seeing narratives that have been filtered and transmitted through videos that are very easy to crop or very easy to cut and make it seem more terrifying to any one perspective.”

Stephens adds that many of the social media accounts that she studies were set up just to reproduce and spread divisive information in order to boost engagement — often by taking a kernel of truth and placing it out of context, or by exaggerating it in an inflammatory way.

“There are accounts that seem to be just following other accounts that post divisive material, so that they can re-post it and up where it shows in the ranking on pages,” she says.

Hindman says this incident reinforces his skepticism about social media platforms’ progress toward preventing the spread of division and disinformation online. The @2020fight account, for example, was only closely examined after it had already played a significant role in amplifying the first video from the Lincoln Memorial. “Why couldn’t that level of scrutiny have been applied earlier?” he says of Twitter’s response.

The problem also extends to media consumers, who are more likely to share content that aligns with their beliefs. “People are more gullible consumers of information that supports their political views than of information that challenges them,” University of California, Irvine professor of psychological science Peter Ditto previously told TIME.

While the original viral video sparked immediate condemnation of the Covington Catholic students, as more videos circulated with additional context, many individuals and organizations walked back their critiques of the youths. President Donald Trump defended the Covington students, framing the episode as evidence of a biased news media. “Nick Sandmann and the students of Covington have become symbols of Fake News and how evil it can be,” he tweeted Tuesday.

But many others argue that the actions of the Hebrew Israelites did not vindicate the students, who still appear in the video to mock or mimic Phillips’ drumming and make the “tomahawk chop” — a gesture considered by some to be racist and insensitive toward Native Americans. Many also see the rush to defend the boys as an example of the leniency and forgiveness rarely afforded to boys of color, tapping into a broader debate about race and privilege in the United States.

Jon Stegenga, a photojournalist who was documenting the Indigenous People’s March and was at the Lincoln Memorial during the confrontation on Friday, says the original viral video incorrectly implied that the students had swarmed around Phillips. In reality, Phillips walked toward their group in an effort to diffuse the tension between the students and the Hebrew Israelites.

And at the end, in another moment not depicted in the viral video, Phillips turned and addressed the crowd. “Relatives, let’s make America great,” he says. “Let’s do that.”

Stegenga says one of the Covington students asked, “How do we do that?”

He heard one of the Native American marchers respond: “Not like this.” 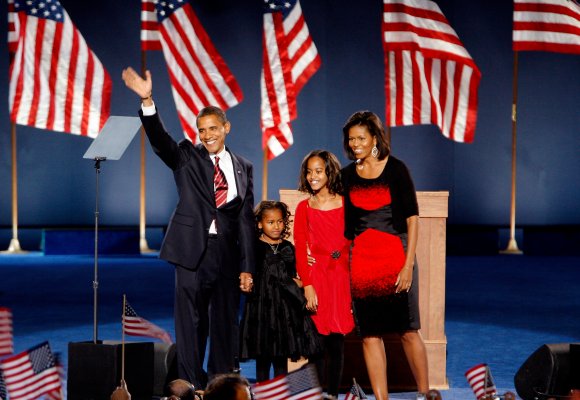 This #10YearChallenge Reveals How Far America Has Come in a Decade
Next Up: Editor's Pick