The Senate Will Vote on the Shutdown. But There's Still No End in Sight

After a long month of inaction, the Senate will now vote on two bills that could possibly end the month-long government shutdown. But both are widely expected to fail, raising more questions about how the stalemate will end.

Along the lines of President Donald Trump’s proposal, the Republican plan would fund $5.7 billion for a border wall in exchange for a three-year reprieve from deportations for people covered by the Deferred Action for Childhood Arrivals program and temporary protected status. The Democratic plan would reopen the government, but only through Feb. 8 to allow more time for negotiations.

Both measures would need 60 votes in order to advance, which neither are expected to get. And there are other obstacles: The Republican plan would almost certainly fail in the Democrat-controlled House of Representatives, while Trump would likely veto the Democratic plan.

The 1,301-page bill driven by the President, which the Senate Appropriations Committee Chairman Richard Shelby released last night, includes additional items to incentivize the Democrats, like extending the Violence Against Women Act through the rest of the fiscal year and additional disaster relief for states ravaged by hurricanes and wildfires. (The Democrats’ proposal that lawmakers are voting on Thursday will now also include disaster relief).

But Democratic leadership in both chambers rejected the proposal from the President before it was even officially announced this past Saturday, objecting to the fact that it does not include a permanent solution for DACA recipients and beneficiaries of TPS, and would prevent children from Central America from seeking asylum at the border.

“The President’s proposal is one-sided, harshly partisan, and was made in bad faith,” Schumer said Tuesday, noting that the only reason DACA and TPS beneficiaries were in danger of deportation was because Trump himself altered the policies. “It’s like bargaining for stolen goods.”

Although some moderate lawmakers from states where Trump is popular, like West Virginia Sen. Joe Manchin, remain undecided about how they will vote, no Democrats in the Senate have explicitly committed to backing the legislation. But Senate Republicans have remained similarly opposed to the slew of bills House Democrats have passed to reopen the government, arguing that they are pointless because the President won’t sign them.

“We all know what is necessary to move past the funding impasse,” Senate Majority Leader Mitch McConnell told his colleagues Jan. 8. “A negotiated solution that can pass the House, earn 60 votes in the Senate, and which invests enough in border security to earn the president’s signature. As I’ve stated clearly, the Senate will not waste floor time on show votes.”

Two weeks later, McConnell appears to have relented, even if it’s likely these votes go nowhere. 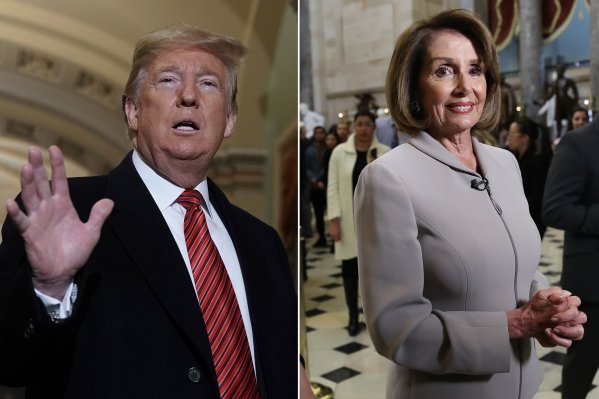